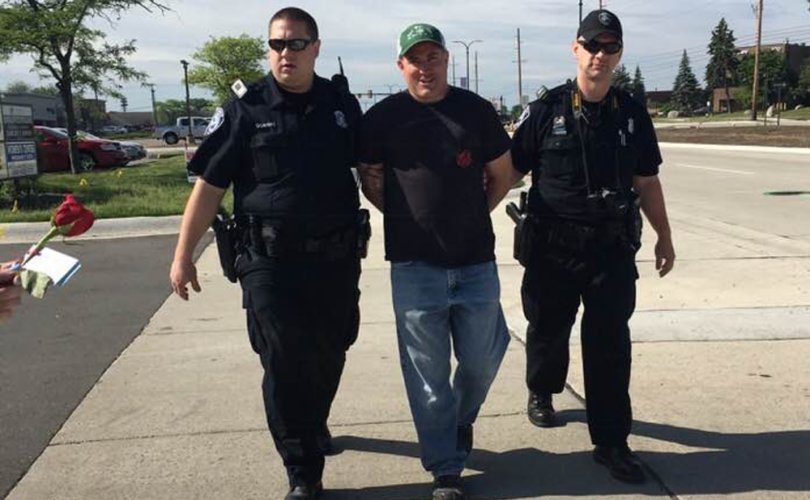 Monica Migliorino Miller, executive director of Citizens for a Pro-Life Society, and Will Goodman were arrested June 1 outside the Women’s Center of Michigan, run by abortionist Jacob Kalo at 6765 Orchard Lake Road in West Bloomfield county.

They were charged with breaching 48th District Court Judge Marc Barron’s probation order to not go within 500 feet of any abortion center in the United States.

Barron told the two Thursday they were “anarchists” who followed their own laws, and referred to Goodman, a full-time pro-life activist, as “a danger to society,” according to Lynn Mills of Pro-Life Michigan, who was at the hearing.

Miller and Goodman, along with Patrice Woodworth, Matthew Connolly, and Robert “Doc” Kovaly, were convicted by a six-person jury in February of trespass and obstructing a peace officer.

The conviction stemmed from a December 2 Red Rose Rescue at the Women’s Center, in which the five entered the abortion facility and offered roses and support to mothers in the waiting room.

Barron sentenced the five in March to eight days of community service and a $500 fine each, as well as one year’s reporting probation with the conditions to stay 500 feet away from every abortion center in the US, and not contact each other.

The sentence was unprecedented in its scope and severity, Miller told LifeSiteNews at the time.

“Even in the heyday of the Rescue movement, we never saw anything like this, really,” she said. “I can only come to the conclusion that the judge is in favor of legalized abortion, that he saw that the Red Rose Rescue was a threat to the practice of abortion.”

Robert Muise, an attorney with American Freedom Law Center who represents the Michigan Red Rose Rescuers, filed an “emergency motion” in March with the Oakland County circuit court asking for a stay of the sentence, pending appeal of their convictions.

But as weeks went with no action by the court, the pro-lifers “are not not going to exercise their constitutional rights while they’re on probation, that’s the whole point,” Muise told LifeSiteNews.

“So they did and now they got arrested and now they’re sitting in jail,” he said, and there’s still no ruling on his emergency motion to stay the sentence.

“And this is how ridiculous this is. About two weeks ago, I filed an emergency motion for expediting consideration of our pending emergency motion,”  Muise told LifeSiteNews.

“It’s almost laughable, but come on, rule on this thing. It’s an emergency motion for a reason. People are going to jail.”

Indeed, Miller and Goodman decided to breach what they said was an “unjust” probation order on June 1, when they stood outside Kalo’s abortion center to offer alternatives to abortion to women as they approached.

And before they were arrested, Miller succeeded in persuading Yolanda not to abort her child, she told LifeSiteNews at the time.

Goodman refused to accept a GPS “tether” as a condition of his bail, so has been in jail since the June 1 arrest.

Miller accepted bail of $2,500 and the condition of a GPS ankle bracelet because she wanted to be free to help Yolanda, who had said her boyfriend was pressuring her to abort their child.

Yolanda is now firm in her decision not to go through with the abortion, Miller told LifeSiteNews the evening before the June 14 hearing.

Barron revoked the probation order Thursday and sentenced Miller and Goodman for the trespass and obstruction of a police officer convictions, which carry a maximum sentence of 120 days, Muise told LifeSiteNews.

“Quite frankly, knowing Judge Barron, I thought that was on the lighter side,” he said. “I was surprised … I was thinking it was going to be more like 100 days.”

Miller will be out of jail in time for the August 22 start of the fall semester at Madonna University, a Catholic college in Livonia, Michigan, where she teaches theology.

Muise said he might file a motion in the court of appeal, which has supervisory authority over the lower courts, requesting it to tell the lower court to rule on his emergency motion.

“It’s ridiculous. We’ve got people sitting in jail for exercising their constitutional rights,” said Muise, who is also representing the individuals who took part in a September Red Rose Rescue in Sterling Heights, Michigan.

“But we still have the appeal. I’m still hoping to get a lot of this thrown out.”