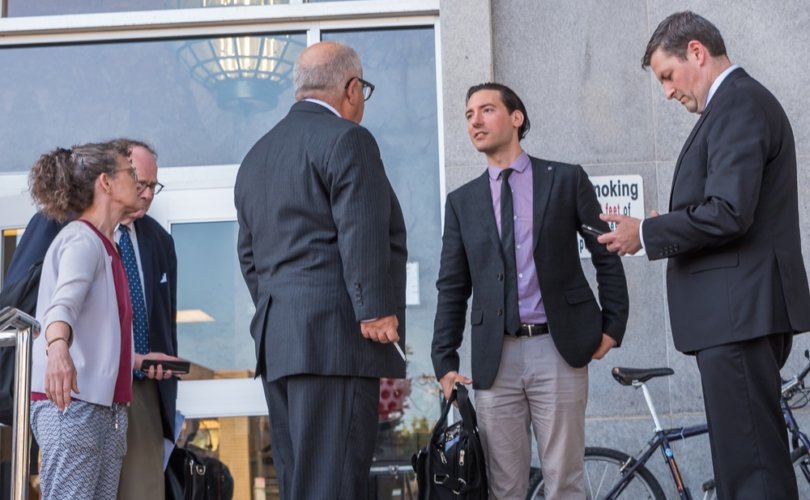 SAN FRANCISCO, California, September 11, 2019 (LifeSiteNews) – A judge denied a gag order to California’s attorney general that would have muzzled David Daleiden and Sandra Merritt’s lawyers from referencing the aborted-baby body-parts traffickers in “public comments” to media. Granting the order would have ultimately restricted reporting on the preliminary criminal hearing of the pro-life investigative journalists.

Filed by Attorney General Xavier Becerra and Deputy Attorney General Johnette Jauron, the motion cited a LifeSiteNews article on the testimony of “Doe 12,” the CEO of StemExpress, when it asked for a gag order “to protect the safety of the Does witnesses.” (Read the full motion here.)

“Ultimately, the judge did the right thing and denied the motion,” said Brentwood Ferreira, lawyer for David Daleiden.

The California Attorney General “attempted to relate a purported incident of road rage that one of the witnesses claims that she encountered fifty-five miles away from the courthouse,” recounted Mihet. “Without any evidence whatsoever, they tried to allege that it was inspired by a LifeSiteNews article that was published the next evening after the incident,” said the Liberty Counsel attorney.

Mehit said that the AG also blamed the defendants’ attorneys’ comments which were also made after the road rage incident had occurred. “This was a preposterous and ludicrous motion,” said Mihet.

“Fortunately this morning the court denied this motion as well and the defendants and counsel remain free to discuss publicly outside the courtroom the testimony that takes place inside the courtroom,” he added.

Daleiden and Merritt are charged with 15 felony counts of illegal taping of confidential information in connection with undercover videos they released in 2015 after a three-year undercover investigation into Planned Parenthood’s buying and selling of baby body parts.

The motion had asked Judge Christopher Hite to “order the defendants to not reference the victims or any matter which may be taken to identify them or their livelihood in any matter. We request an order to protect the safety of the Does witnesses.”

The order had also asked that the court “exercise its discretion to limit the statements the parties may make in public in regards to the witness testimony until after the conclusion of the preliminary hearing.”

Hite had previously ordered that the names of the 14 accusers of Daleiden and Merritt remain sealed during the prosecution, but said all testimony heard in court can be published.

The motion for the gag order had stated that California Department of Justice Special Agent Brian Cardwell, who testified at the preliminary hearing Tuesday (see related story), interviewed Doe 12 “after her preliminary hearing testimony on Thursday, September 5, 2019 in this Department. In that interview, Doe 12 expressed fear and harassment she and her company have suffered immediately after her testimony.”

LifeSiteNews reported that Doe 12 essentially admitted in her testimony last Thursday that StemExpress supplies beating fetal hearts and intact fetal heads to medical researchers. She also admitted that the baby’s head could be procured attached to the baby’s body or “could be torn away.”

Jauron told Judge Hite during the hearing that Doe 12 “among all victims has been particularly targeted” and said the “inflammatory, inaccurate, almost insane analysis of this victim’s testimony” appealed to a “fringe element of people out there” who are “willing to believe whatever they read on the internet.”

But Hite pointed out that “The the order of magnitude you're requesting is frowned upon as a burden on an individual's First Amendment right.”

However, he did have some concerns about “witness intimidation, which is a crime,” he said.

Hite suggested he might issue a criminal restraining order against Daleiden and Merrit, something to the effect that they stay 150 feet away from Doe 12. That drew strenuous objections from Brentford Ferreira, lawyer for Daleiden, who argued the judge had no legal grounds for such a stay-away order.

“It’s extremely insulting,” Ferreira said, pointing out that Daleiden and Merritt are not responsible for what other individuals publicly said on the case. If Hite issued a stay-away order on Daleiden and Merritt, the defence would ask for an emergency petition to stop the preliminary hearing to fight it, he said.

“We can’t have the court treating my client like a criminal,” Ferriera said, and issuing a protective order against him could very well prejudice him in the criminal matter he’s now charged with. He also argued that it was the attorney general’s decision to have a public preliminary hearing rather than seek an indictment through a grand jury, which is a closed-door process.

Doe 12’s lawyer Jeffrey Einsohn argued she had a constitutional right to be “free from intimidation, harassment, abuse” and “these things happened” after people from CMP had been “tweeting all day.

“I can’t stop the general public from tweeting about a court proceeding. You know that.”

Peter Breen, lawyer for Daleiden and vice president and senior counsel with the Thomas More Society, which is defending Daleiden pro bono, had called the motion “outrageous.”

“We’re going to fight it very, very hard. It’s an incredible violation of the First Amendment, of the people’s right to know, of the right to a public trial,” Breen told LifeSiteNews in a previous report.

“Everything that Planned Parenthood and the National Abortion Federation have been trying to do is to shut down anyone knowing about their scheme to sell fetal parts and organs for profit which involves babies born alive, manipulating abortion techniques without telling women that they’re doing that to them, terrible things that they’re doing for money and not for the best interests of the patients,” he said.

“And of course, for us who are pro-life, they’re taking and treating these poor little children like they’re cattle to be chopped up and shipped out,” he said.

“It’s disgusting and so we’re fighting very hard on that front to get word about it and we’re doing it in a way that’s legal and appropriate.”