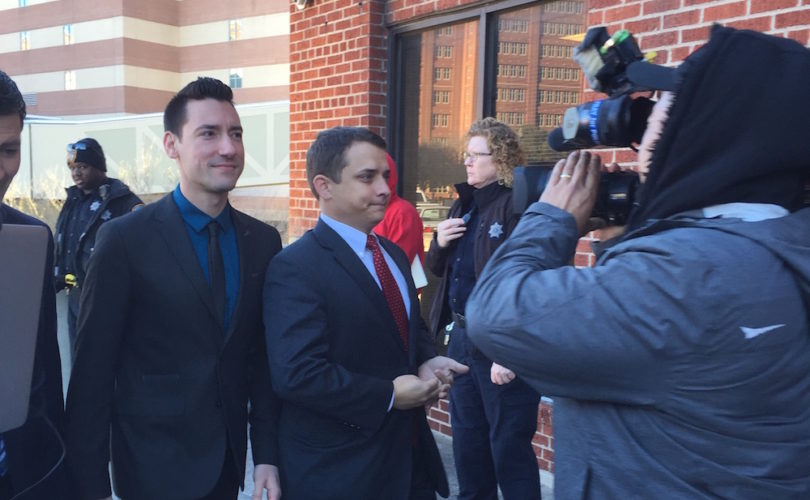 The judge in the case is still considering whether to hold Daleiden and the Center for Medical Progress (CMP) in contempt.

U.S. District Judge William Orrick found Steve Cooley and Brent Ferreira in violation of his federal court order Tuesday that banned the release of the CMP videos from the National Abortion Federation (NAF) conferences in 2014 and 2015.

Orrick is expected to order Daleiden’s attorneys to pay financial damages to the NAF shortly, according to Alexandra Snyder, executive director for Life Legal Defense Foundation (LLDF), which is coordinating the various attorneys representing Daleiden.

Daleiden, the lead investigator for CMP, would likely be ordered to pay NAF as well if he is found in contempt, and he will probably be required to sign a declaration stating he will not release any more video.

However, Snyder said, “The National Abortion Federation did not present sufficient evidence that David was involved in the release of the enjoined videos.”

Tom Brejcha, president and chief counsel of the Thomas More Society that has been underwriting Daleiden’s and CMP’s criminal defense, said in a statement, “Yet another appeal seems in order here, for as the L.A. Times editorialized, California’s felony criminal prosecution of these pro-life undercover journalists was a gross ‘overreach’ as two massive federal cases were already pending against them in Judge Orrick’s federal court.”

The NAF video is just one part of CMP’s series of undercover coverage exposing abortion industry executives bartering in the sale of body parts from aborted children. The videos have led to a Congressional investigation of the abortion industry and increased calls for defunding of Planned Parenthood, the nation’s largest abortion chain.

Daleiden still has a significant amount of video that has not yet been released.

Orrick had ordered Daleiden and his criminal attorneys to appear on the contempt charge earlier this summer.

The order stemmed from the attorneys having released the videos in May. Cooley and Ferreira argued in Tuesday’s contempt hearing that the videos are key in providing the CMP project lead proper defense in his criminal case.

That defense hinges on a California eavesdropping statute that protects confidential conversations. The videos show the NAF meetings were a public gathering with people milling around, where Daleiden’s legal counsel contends there could be no expectation of confidentiality in this sort of setting.

CMP tried to get Orrick disqualified from the case in June but was unsuccessful.

The San Francisco Superior Court threw out 14 of 15 criminal charges against Daleiden, CMP and Daleiden’s CMP associate, Sandra Merritt, in June, finding they were “legally insufficient.”

Felony charges of using false identification against Daleiden and Merritt and a misdemeanor count of trafficking in human organs against Daleiden were dismissed last year in Texas after attorneys argued that Harris County District Attorney Devon Anderson’s office colluded with Planned Parenthood.

The suppressed NAF footage displays the merciless nature of the industry, with convention attendees being forthright in their descriptions and perspective on varying abortion procedures.

In one instance, a Planned Parenthood director explains how she dismembers unborn children in the womb in a certain way so that her procedure does not classify as partial-birth abortion. The partial-birth procedure violates federal law, as does trafficking in human body parts and altering abortion procedures to procure intact babies.

Also on the video, a Planned Parenthood employee says, “The fetus is a tough little object and taking it apart, I mean taking it apart in day one, is very difficult.”

At another point in the footage an abortion provider recounts how, “An eyeball just fell down into my lap, and that is gross!” This comment drew laughter from the audience.

Snyder explained for LifeSiteNews how statements made in open court by legal counsel for the abortion industry trade group suing Daleiden inadvertently reveal the horror of abortion.

“Derek Foran, lead attorney for NAF, said that the videos were released with the hashtag #PlannedParenthoodSellsBabyBodyParts,” Snyder said. “He called this a ‘horrendous term.’ I agree. The business of tearing babies apart and profiting from the sale of their parts is horrendous.”