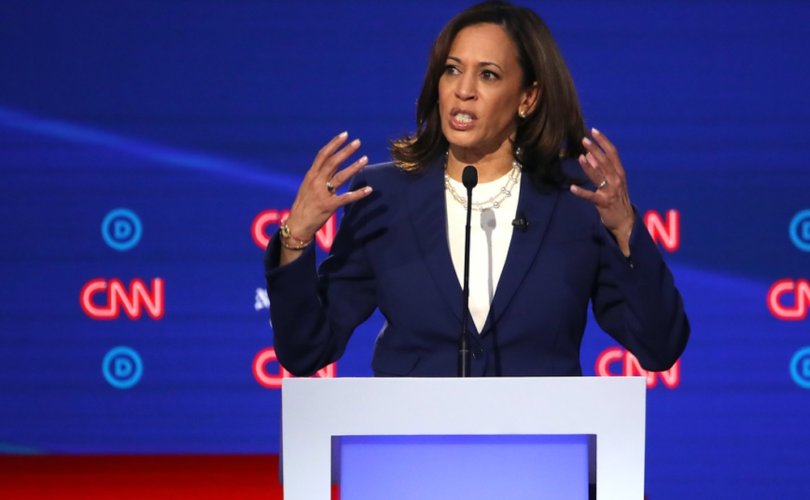 December 3, 2019 (LifeSiteNews) – Sen. Kamala Harris of California announced Tuesday she is dropping out of the Democrat presidential primary, ending a campaign that has fallen short of expectations for months.

“I’ve taken stock and looked at this from every angle, and over the last few days have come to one of the hardest decisions of my life,” Harris explained in a Medium post. “My campaign for president simply doesn’t have the financial resources we need to continue.”

“I want to be clear: although I am no longer running for President, I will do everything in my power to defeat Donald Trump and fight for the future of our country and the best of who we are,” she added. “I know you will too. So let’s do that together.”

A former prosecutor who was previously California’s attorney general, Harris played a key role in defending Planned Parenthood over its 2015 baby-parts scandal and instead investigating the Center for Medical Progress’ pro-life investigators who exposed it.

As a Senate candidate, she bragged about forcing religiously-owned companies and pro-life pregnancy centers to violate their consciences. As a senator she suggested Trump judicial nominee Brian Buescher’s membership in the Catholic fraternal organization Knights of Columbus was problematic because of its pro-life, pro-marriage stances.

During the 2020 campaign Harris doubled down on her support for abortion on demand and the LGBT cause, touting plans to have the Justice Department review state pro-life laws before they could take effect and calling for a “better understanding” of the “needs” of the “transgender community.”

Her professional background and relative youth, as well as her race and sex, led many to see her as a serious contender for her party’s nomination and a legitimate threat to President Donald Trump. But instead of emphasizing her mainstream appeal, Harris often played for the support of the hard Left, from touting her “preferred pronouns” and endorsing decriminalized prostitution to proposing ten-hour school days and demanding that Trump be banned from Twitter.

Harris plummeted in both fundraising and polls, garnering just 3.4 percent in RealClearPolitics’ latest polling average. On Friday, the New York Times reported on disarray within the Harris camp, painting a picture of strategic incoherence, dueling personalities, and a fundamental division over which segments of the electorate to compete for.

“Many of her own advisers are now pointing a finger directly at Ms. Harris,” the Times reports. “In interviews several of them criticized her for going on the offensive against rivals, only to retreat, and for not firmly choosing a side in the party’s ideological feud between liberals and moderates.”

Former Vice President Joe Biden remains the frontrunner for the Democrat nomination. It remains to be seen whether the eventual nominee will consider Harris for his or her running mate.