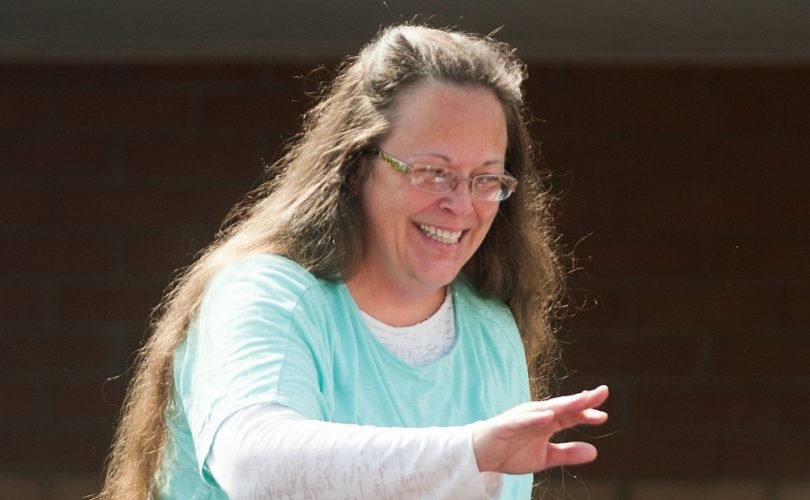 ROWAN COUNTY, Kentucky, February 9, 2016 (LifeSiteNews) – A federal judge has turned down the ACLU's attempt to force Kim Davis to violate her conscience while issuing marriage licenses to same-sex couples.

Although Governor Matt Bevin granted a religious accommodation for the county clerk to issue altered marriage licenses to homosexuals, the ACLU brought a lawsuit seeking to force Davis to issue the old forms with her full name on them.

“There is absolutely no reason that this case went so far without reasonable people respecting and accommodating Kim Davis' First Amendment rights,” said Mat Staver, the founder and chairman of Liberty Counsel, who is defending Davis. “Today's ruling by Judge Bunning rejected the ACLU's request to hold Kim Davis in contempt of court.”

Kim Davis is a born again Apostolic Christian who refuses to issue marriage licenses bearing her name to homosexuals, because doing so would imply her consent and participation in something the Bible deems sinful. “It's a Heaven or Hell decision,” she said. Davis contacted state legislators and former Gov. Steve Beshear, a Democrat, seeking a religious accommodation that would alter the form but allow her office to recognize gay unions, to no avail.

Ultimately, she spent six days in jail last September after Judge Bunning held her in contempt of court for refusing to issue the unamended forms.

“Those who are persecuting Kim Davis believe that Christians should not serve in public office,” Senator Ted Cruz said after her arrest.

When she was released last September 8, presidential hopefuls Mike Huckabee and Cruz showed up to wish her well.

When Davis returned to work last September 14, she allowed other employees to grant new certificates that did not have her name on them.

Deputy Rowan County Clerk Brian Mason said that Davis “confiscated all the original forms, and provided a changed form which deletes all mentions of the County, fills in one of the blanks that would otherwise be the County with the Court’s styling, deletes her name, deletes all of the deputy clerk references, and in place of deputy clerk types in the name of Brian Mason, and has him initial rather than sign.”

Matt Bevin, the Republican who would be elected governor that November, promptly granted Davis an accommodation and signed the first new regulation on abortion in a dozen years shortly after taking office.

But the ACLU sued to force Davis to issue the old certificates, anyway. Judge Bunning wrote that would be unnecessary.

“There is every reason to believe that any altered licenses issued between September 14, 2015, and September 20, 2015, would be recognized as valid under Kentucky law, making re-issuance unnecessary,” wrote Judge David Bunning, a Republican whose father Jim Bunning, was a baseball great and former U.S. senator. “Under these circumstances, the court finds that Plaintiffs’ request for relief is now moot.”

Since returning to work, Davis has met with Pope Francis and attended President Obama's last State of the Union address.

“From the beginning we have said the ACLU is not interested in marriage licenses. They want Kim Davis' scalp,” Staver said. “They want to force her to violate her conscience. I am glad the court rejected this bully tactic.”

Kim Davis attorneys: Associated Press endangered our lives by accusing us of ‘hate’