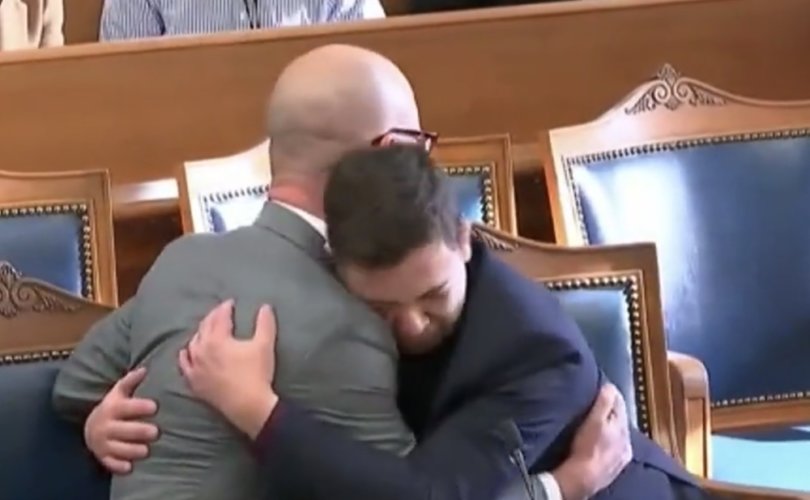 KENOSHA, Wisconsin (LifeSiteNews) – Eighteen-year-old Kyle Rittenhouse was acquitted of all charges Friday for a series of shootings in self-defense that happened last year during the riots in Kenosha, Wisconsin.

Rittenhouse, who was 17 at the time, collapsed and cried heavily upon hearing the verdict that he was found innocent on all charges.

He was charged with reckless homicide, recklessly endangering safety with the use of a dangerous weapon, and intentional homicide after killing two men and wounding a third during a night of violent rioting and vandalism as part of the Black Lives Matter protests that took place all across the United States last summer.

After the shooting took place, then-presidential candidate Joe Biden labeled Rittenhouse a “white supremacist,” despite the fact that both men who were killed in the exchange were white, as is Rittenhouse.

He faced life in prison if found guilty on the charge of first-degree intentional homicide, which is called first-degree murder in other jurisdictions.

Fearing a violent reaction if the verdict was found unfavorable to progressives, Wisconsin Democrat Gov. Tony Evers asked people to remain calm and placed 500 members of the Wisconsin National Guard on standby if needed.

Prosecutors had portrayed Rittenhouse as a “wannabe soldier” who was looking for trouble, and one left-leaning media outlet labeled him “a callow, foolish boy who had no business being in Kenosha.”

Rittenhouse defended himself against accusations that he had no business being in Kenosha at the time of the rioting by arguing he was in town visiting his father. Throughout the trial Rittenhouse expressed that he wanted to help protect the community against damage and violence due to the rioting.

After almost four days of consideration, the jury found Rittenhouse not guilty on all charges, and therefore that he had fired in self-defense. One of the men he killed, Joseph Rosenbaum, was a convicted sex offender with multiple young male victims. The other man who died, Anthony Huber, had a criminal history including once threatening to “gut” his brother “like a pig” while holding a butcher’s knife to his stomach.

Witnesses during the trial described Rosenbaum as “hyperaggressive” and stated that he had threatened to kill Rittenhouse earlier that evening.

The judge who oversaw the trial, Bruce Schroeder, more than once had harsh words for prosecutor Thomas Binger, who shocked viewers of the trial as he pointed an AR-15 at the jury during his closing arguments.

He was heavily criticized for the theatrical tactic as gun safety experts expressed dismay that the lawyer pointed the gun at the jury with his finger on the trigger, breaking basic standards of how the National Rifle Association teaches gun owners to “always keep the gun pointed in a safe direction.”

Despite the ruling, which was scrutinized by national media attention and live-streaming of the entire event, the leftist mainstream media has already taken to racializing the trial as something “designed to protect white conservatives who kill.”