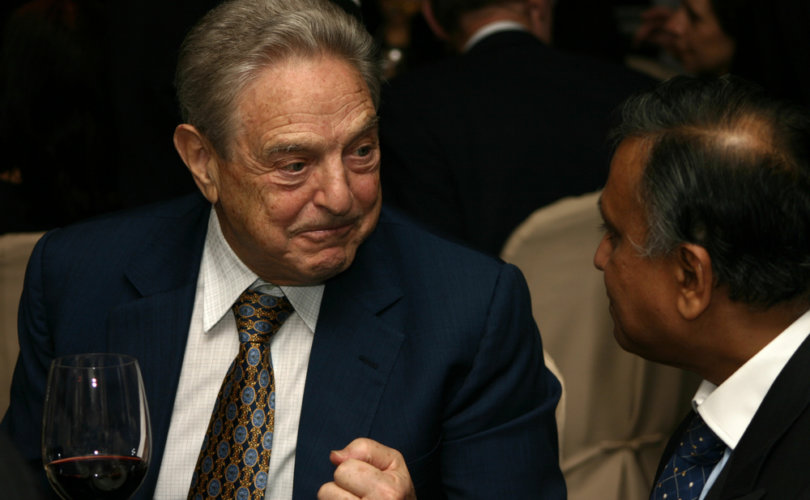 August 23, 2016 (LifeSiteNews) – Leaked emails through WikiLeaks reveal that billionaire globalist George Soros – one of Hilary Clinton's top donors – paid $650,000 to influence Pope Francis’ September 2015 visit to the USA with a view to “shift[ing] national paradigms and priorities in the run-up to the 2016 presidential campaign.” The funds were allocated in April 2015 and the report on their effectiveness suggests that successful achievements included, “Buy-in of individual bishops to more publicly voice support of economic and racial justice messages in order to begin to create a critical mass of bishops who are aligned with the Pope.”

The monies were granted to two US entities that have been engaged in a long-term project, according to the report, of shifting “the priorities of the US Catholic church.” Grantees were PICO, a faith-based community organizing group, and Faith in Public Life (FPL), a progressive group working in media to promote left-leaning ‘social justice’ causes. Soros has funded left-wing causes the world over and was just found to have been funding an effort to eliminate pro-life laws around the globe.

Board Minutes from the May 2015 meeting of Soros’ Open Society Foundation in New York reveal that in the planning stages of the papal visit initiative, the group planned to work through one of the Pope’s key advisors, Cardinal Oscar Rodriguez Maradiaga, naming him specifically in the report. In order to seize on the opportunity provided by the Pope’s visit to the US, says the report, “we will support PICO’s organizing activities to engage the Pope on economic and racial justice issues, including using the influence of Cardinal Rodriguez, the Pope’s senior advisor, and sending a delegation to visit the Vatican in the spring or summer to allow him to hear directly from low-income Catholics in America.”

In 2013 Cardinal Rodriguez endorsed PICO's work in a video during a visit from PICO representatives to the cardinal's diocese. “I want to endorse all the efforts they are doing to promote communities of faith,” he said, “… Please, keep helping PICO.”

The post operative report on the funding to influence the papal visit comes in the 2016 report entitled, Review Of 2015 U.S. Opportunities Fund. The Soros group was pleased with the result of their campaign and saw statements by various bishops against presidental candidates who are using “fearmongering” – likely a reference to the GOP lineup, and perhaps Trump specifically – as one outcome of their efforts. “The impact of this work and the relationships it has fostered can be seen in the broad range of religious leaders hitting pointedly back at presidential candidates for their use of fearmongering,” the report said.

Additionally, the summary report says their funding was helpful to counter “anti-gay rhetoric” in the media. The “efficacy of the media campaign can be seen in the team’s ability to react to and counter the anti-gay rhetoric following the Kim Davis story (the Kentucky county clerk who was jailed for defying a federal court order to issue marriage licenses to gay couples whom the Pope visited),” the report states.

The grant specifically targeted the ‘pro-family’ agenda, redirecting it from defending marriage to being concerned with income equality. “FPL’s media, framing, and public opinion activities, including conducting a poll to demonstrate that Catholic voters are responsive to the Pope’s focus on income inequality, and earning media coverage that drives the message that being ‘pro-family’ requires addressing growing inequality,” says the May report.

Attorney Elizabeth Yore, who served on the Heartland Institute Delegation that traveled to the Vatican in April 2015 to urge Pope Francis to re-examine his reliance on UN population control proponents who promote climate change, spoke to LifeSiteNews about the Soros initiative. “Catholics serve as a huge and influential voting block in the U.S. election,” she said. Soros, she said, is “using the head of the Catholic Church to influence this key voting block,” with the “bully pulpit of the papacy” to ensure Hilary Clinton’s election.

Yore pointed out “this is not the first time that the unholy alliance of Soros and the Vatican successfully collaborated on a political project.” In 2015, she recalled, “the Soros operatives, embedded in the Vatican, directed Pope Francis’ Environmental Agenda, by delivering for Soros and the UN, an Apostolic Exhortation on Climate Change, and a prized papal endorsement of the UN Sustainable Development Goals and the Pope’s apostolic blessing on the Paris Climate Treaty.”

In terms of the Soros goal of shifting the priorities of the Catholic Church away from moral absolutes, two US bishops stand out as champions of the move. San Diego Bishop Robert McElroy has repeatedly stressed changing the Church’s priorities and has had the backing of Pope Francis’ ‘favored son,’ Chicago Archbishop Blase Cupich. McElroy created a furor at the U.S. Bishops Conference meeting last November over his attempt to change a document instructing Catholics on how to vote.

McElroy made a pointed argument that the document was out of step with Pope Francis’ priorities — specifically, by putting too much emphasis on abortion and euthanasia, and not enough on poverty and the environment.  Cupich later praised McElroy’s intervention as a “real high moment” for the conference and supported the move to put degradation of the environment and global poverty on par with abortion and euthanasia.

Concluding their report reflecting on the success of the grant to influence the papal visit, the Soros group was very pleased with the results. Looking to the future, they are excited that the long-term goal of shifting the priorities of the Catholic Bishops in the United States “is now underway.”