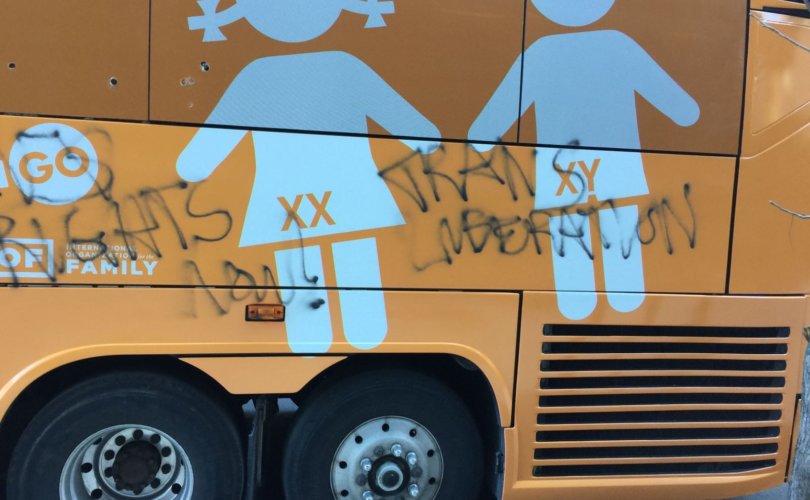 “The bus was on the streets of New York” in Manhattan shortly after 4:00 p.m. today, Joe Grabowski of the National Organization for Marriage told LifeSiteNews. “It was vandalized by spray paint and a hammer was taken to it on the side.”

He said police are at the “crime scene” investigating.

“This is what those who pretend to preach tolerance actually feel about…other viewpoints,” said Graboswki. “We’re the ones who try to have an open conversation and a dialogue with people and this is the kind of intimidation that is used to try to cow people who believe in traditional values not to speak out.”

The bus tour organizers are considering it a “hate crime,” according to an email from NOM President Brian Brown.

Grabowski said it was ironic that opponents of the bus claimed it would incite violence against people who identify as transgender.

“Well, here’s the first act of violence that we’ve seen,” he said. “And it’s not somebody out there attacking a trans person. It’s us getting attacked.”

Some twitter users cheered the destruction of the bus.

.@CitizenGO Bring your creepy hate bus to Boston. We'll set fire to it there, too. #FreeSpeechBus

Hey #FreeSpeechBus: Free Speech means you're legally allowed to say hateful bullshit. It does NOT mean you're free from the consequences. https://t.co/b2xYf6zLjC

whoever vandalized the #freespeechbus in NYC, feel free to DM me so i can buy you a beer next time i'm in town

@ProFam_Org I love how you call it the #freespeechbus yet that is the opposite of what it is. I'm glad it was vandalized.

The bus was parked outside the United Nations earlier. It's scheduled to visit other cities on the East Coast.