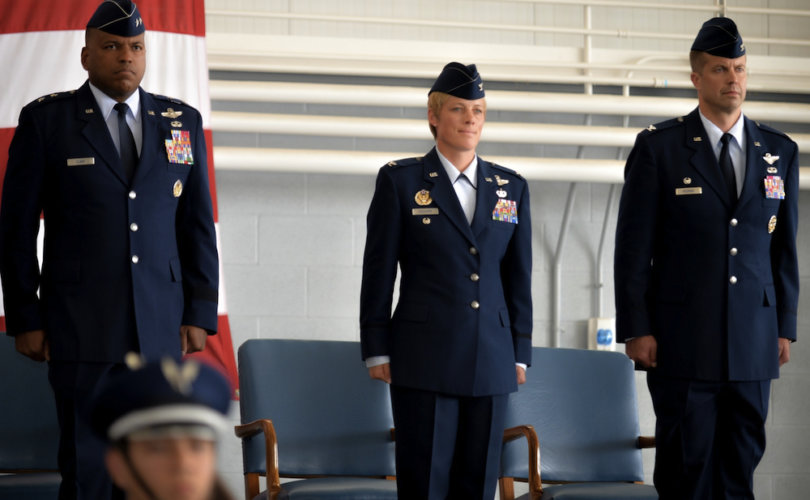 COLORADO SPRINGS, Colo., March 30, 2017 (LifeSiteNews) — An open lesbian has been chosen to be the next commandant of the U.S. Air Force Academy, according to a USAF Academy report and other media.

Col. Kristin Goodwin has a “wife” and two children. She will take charge of the USAF Academy pending approval by the U.S. Senate. If approved, she likely will assume her new position in May. That is usually a formality, but conservative opposition to her appointment might make it less so.

Klingenschmitt, who heads the Pray in Jesus Name Project, told LifeSiteNews that Goodwin’s appointment under a Trump presidency is part of a “deep state problem of Obama’s appointments remaining in office while the Senate drags its feet to confirm Donald Trump’s appointments to replace them.”

“Obama’s bureaucrats in the Pentagon are still running the show,” Klingenschmitt said. “Obama is gone. Why does he still have this power?”

“Goodwin, a 1993 Academy graduate, was nominated by the president for promotion to brigadier general,” reports a March 23 article by Ray Bowden of USAF Public Affairs. The promotion reportedly is a necessary first step for her to assume leadership of the Academy.

Goodwin is “scheduled to be assigned to the Academy, pending Senate approval of the nomination later this year,” according to the Academy article, which makes no mention of her lesbianism.

In the article, Lt. Gen. Michelle Johnson, the superintendent of the USAF Academy, praised Goodwin, saying, “We’re anxious to see her on board … She’s a great leader and she’s going to be a great addition to our team. We’re really excited about the future with Kristin.”

According to the article, “Goodwin served in several high-level leadership positions, including vice commander of the 59th Bomb Wing at Whiteman Air Force Base, Missouri; commander of the 2nd Bomb Wing at Barksdale AFB, Louisiana; and senior military adviser to the secretary of the Air Force at the Pentagon. … She's also a veteran pilot who has flown B-2 Spirit, the EC-130h compass Call, the C-130 Hercules, and other aircraft.”

But Klingenschmitt, a leading religious liberty advocate, had several questions for the Air Force Academy regarding Goodwin’s appointment, including:

Will Colonel Goodwin protect religious freedom for non-LGBT cadets who believe the Bible is true?

Will she pledge to defend the Constitution, which lists ‘the free exercise’ of religious beliefs with which you may personally disagree?

Will she sit down with Christian ministry group leaders of conservative believers and listen to their concerns?

Will she refrain from becoming a political activist for anti-Christian causes, or will you simply do her job without bias, showing respect for all?

RELATED: Air Force punishes loyal officer over Christian view of marriage, but he won’t go down without a fight

Klingenschmitt focused on the Office of Undersecretary of Defense for Personnel as responsible for Goodwin’s promotion. On March 10, The New York Times reported that Trump is hobbled by his lack of key appointments at  the State Department, DoD and other federal agencies.

“At the Pentagon, military missions in some of the world’s most troubled places are being run by a defense secretary who has none of his top team in place,” the Times reported.

President Obama put a high priority on appointing open homosexuals and “transgender” (gender confused) individuals throughout his government, including the military — a practice social conservatives hoped would come to an end or at least be dramatically slowed down under Trump (despite the latter’s campaign boasts about being pro-LGBTQ).

The perceived pandering to gender-bending political correctness by the USAF and all branches of the U.S. military has received ample attention during the Obama years. Recently, Fox News columnist Todd Starnes broke the story of an email from a senior Air Force official warning airmen at Lackland Air Force Bases not to use potentially “offensive” words like “boy” and “girl.”

The Colorado Springs Independent reported that Weinstein, speaking for his pro-LGBTQ group, Military Religious Freedom Foundation, “has a burning question for USAFA and the USAF leadership: Why are they not publicly acknowledging this groundbreaking selection of a gay, female new Commandant?”

But the God and Country website countered, “To their credit, USAFA reportedly made the announcement without mentioning [Goodwin’s] sexual practices — a fairly rare occurrence and one sure to be ‘corrected’ once the news hits the mainstream press.”

In 2014, Col. Goodwin became the first woman (and open homosexual) to command a combat bomber wing, the Air Force Bomb Wing, the Second Bomb Wing at Barksdale Air Force Base, near Shreveport, Louisiana.

The pro-LGBTQ military group Outright posted this hagiographic description of Goodwin’s appointment to the prestigious post, as her proud “wife,” Kelly, looked on:

“Against this legacy of duty, honor, and sacrifice stood Col. Goodwin [who took] command of a traditionally male-dominated strategic bomber wing. And at her side during the ceremony, attended by members of the entire organization plus higher headquarters generals, was her wife, Kelly, beaming with pride at Kristin’s magnificent accomplishments in the Air Force so far and her tremendous opportunity to command such a unit of distinction. The Goodwins and their two children took up residence in the wing commander’s quarters along a picturesque park where all the base’s top-ranking leaders live. The sign on the curb reads: ‘Col. and Mrs. Goodwin.’”

The Outsmart writer noted, “Lifting the ban on open [homosexual] service didn’t change who the top performers are, it just allowed gays to lead their lives like everyone else and not lose their careers and livelihoods because of who they are.”

But Klingenschmitt told LifeSiteNews, “I long for the good old days when real generals and not social activists were put in places of authority,” he told LSN. “I pray that Mr. Trump … will correct this mistake.”