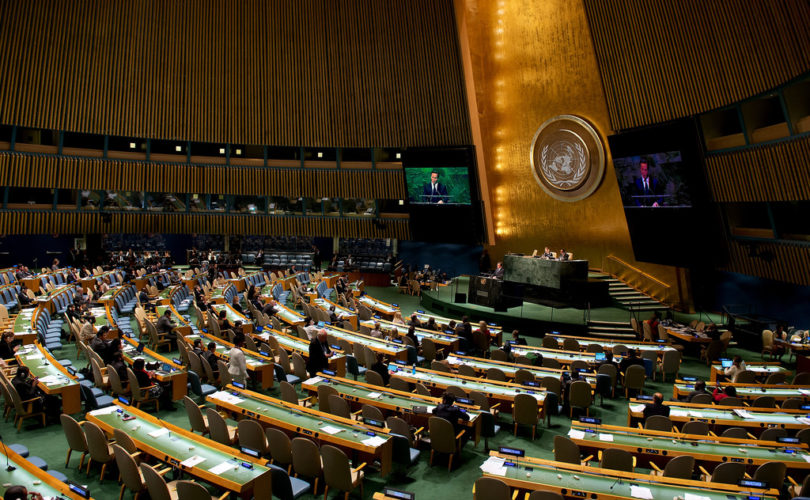 In a lead up to what LGBT activists considered the most important vote by the UN regarding their agenda in years, the UN General Assembly’s human rights committee further paved the way for a controversial new UN post to enforce special new rights based upon the sexual preference and behavior of individuals who identify as lesbian, gay, bisexual, and transgender (LGBT).

An African Group of 54 nations had challenged the legality of the UN bureaucratic post, and called for suspension of the appointed expert’s activities, pending further consultation on the legal basis of the mandate.

Vitit Muntarbhorn of Thailand was appointed on September 30 and has begun his work investigating alleged violence and discrimination based on sexual orientation and gender identity.

The UN General Assembly’s human rights committee voted 84-77 with 12 abstentions Monday to adopt an amendment introduced by Latin American and Caribbean nations eliminating an African-proposed resolution calling for the delay and suspension of the LGBT appointment.

The amended resolution, noting the Human Rights Council's report without any mention of suspending the expert, was then approved in a 94-3 vote with 80 abstentions.

It will now go before the 193-member General Assembly for a final vote in December. It is possible for the African Group to try again for a delay, however it is expected the resulting vote would be similar to Monday's.

The mandate passed by the Council in June increased tension within the United Nations over the advancement of the LGBT cause, according to the Center for Family & Human Rights (CFAM).

The African Group said it was “disturbed” by the continuous focus on “sexual interests and behaviors” and asked that these ideas not be tied to binding human rights law, criticizing introduction of the LGBT agenda into international law.

“The African Group is strongly concerned by the attempts to introduce and impose new notions and concepts that are not internationally agreed upon,” the ambassador of Botswana Charles Ntwaagae said November 4 while presenting the position of the African Group.

“We are even more disturbed at the attempt to focus on certain persons on the grounds of their sexual interests and behaviours, while ignoring that intolerance and discrimination regrettably exists in various parts of the world, be it on the basis of colour, race, sex or religion, to mention only a few,” said Ntwaagae.

Such attempts to add special LGBT rights in to human rights law “undermine the intent of the drafters and signatories to various human rights instruments,” he continued, and “also seriously jeopardize the entire international human rights framework as they create divisions.”

The UN Human Rights Council established this first-ever mandate of an “independent expert” on LGBT issues with a resolution that passed narrowly in June of this year.

A number of countries in the Middle East, along with China and Russia, have joined the African Group in opposing the LGBT advance within the UN, some speaking against the amendment on Monday as well.