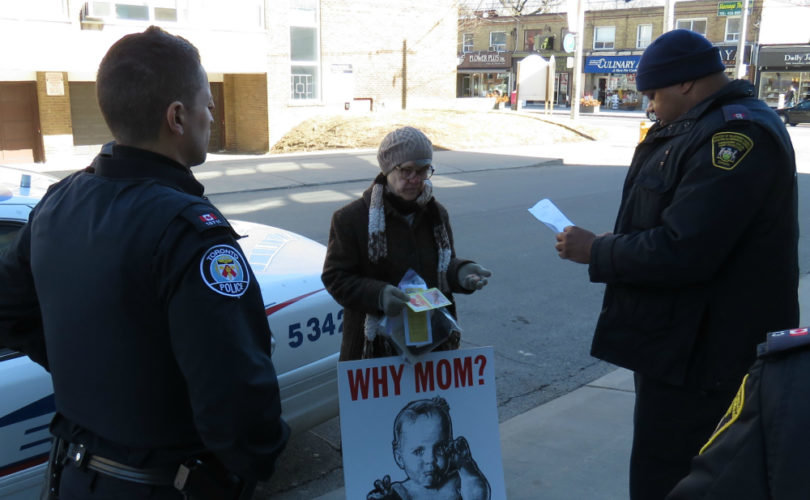 Toronto police officers arrested the well-known pro-life grandmother after a sheriff read Gibbons a court order that prohibits certain activities within 500 feet of the entrance of the abortion clinic, and Gibbons refused to leave.

“I’m sidewalk counseling,” she told LifeSiteNews earlier, as she walked back and forth in front of the building, carrying her trademark sign of an illustration of a small child crying, and the words: “Why, Mom? When I have so much love to give?”

Gibbons’s lawyer Daniel Santoro told LifeSiteNews that the Crown had dropped all charges following Gibbons’s last arrest on August 7, 2014. Gibbons had won an acquittal on appeal in July 2014 of convictions at this location, Santoro said, adding that there is a good chance the crown will drop the charges this time.

But Gibbons spent over three months in jail before her last case was heard.

It was not until November 12, 2014, that Crown counsel Daniel Brandes dropped the August charges, stating there was no reasonable probability that Gibbons would be convicted based on the evidence at hand.

Brandes also observed that Gibbons had spent an “inordinate” amount of time in custody, and “pledged before the court” that in similar cases, the Crown would “be much quicker” to withdraw charges.

Three weeks before Gibbons’ August 2014 arrest, Justice Gary Trotter of the Ontario Court of Justice tossed out as “unreasonable” a 2013 conviction that found her guilty of “intimidating conduct.” Trotter’s July judgment on appeal also stated Gibbons was entitled to persuade people of her pro-life convictions, if she operated within the confines of the law.

And nearly two years earlier, on July 24, 2012, Judge William Wolski of the Ontario Court of Justice acquitted Gibbons after ruling the Crown had not provided enough evidence to prove she was a “nuisance.” However, on March 14, 2013 Wolski convicted Gibbons of disobeying a court order—the conviction ultimately overturned by Justice Trotter.

A January 16, 2015 appeal to overturn a similar conviction was dismissed about a week later, Santoro told LifeSiteNews.

Pro-life advocate Leeda Crawford, who joined a number of supporters to witness Gibbons’ arrest on Tuesday, said an abortion clinic worker told her to leave and took a photograph of Crawford’s car. “I’m not protesting, I’m praying,” Crawford told the worker. “I’m here in quiet solidarity with Linda.”

“The only thing Linda ever does is offer alternatives” to abortion to the women going into the Morgentaler Clinic, said Crawford. “If there is an opening, she’ll encourage them to make another choice, in a loving, quiet way.”

A tangible reminder of the grim reality of what was happening inside the abortion clinic was the arrival of a van “to take the aborted babies away,” in barrels that look like “ice cream containers,” Gibbons told LifeSiteNews.

According to Crawford, Gibbons asked the driver why he was cooperating with abortion in this way. Gibbons gently but firmly points out that people are involved in the abortion industry in ways they don’t realize, or don’t want to face, Crawford told LifeSiteNews.