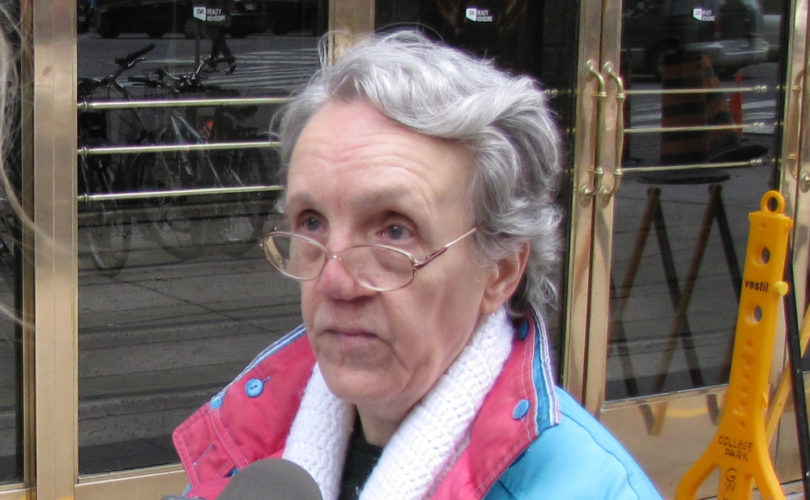 Linda Gibbons is interviewed by the Sun News Network immediately after her release from court Wednesday morning.Tony Gosgnach / LifeSiteNews

TORONTO — Pro-life activist Linda Gibbons walked out of a downtown Toronto courtroom a free woman Wednesday morning after the Crown withdrew criminal charges of disobeying a court order and obstructing a peace officer, laid after she was arrested while demonstrating outside the “Morgentaler Clinic” abortion site this past August 7. The site is protected by a civil court injunction limiting or banning certain types of activities within a specified zone.

Gibbons had been imprisoned since the arrest, with no bail hearing ever held and disclosure never provided to the defence. That raised the ire of her counsel Daniel Santoro, who told the Sun News Network in an interview after the hearing that justice was not served in the case, since she could have been released long ago and probably should never have been arrested in the first place.

Crown attorney Daniel Brandes told the court that his office had been waiting for will-say statements from the sheriff’s officers involved in the arrest, which never came forth. He added that, based on the evidence he otherwise had before him, there was no reasonable probability of a conviction and he was withdrawing the charges.

Brandes harkened to Gibbons’ victory at the Ontario Court of Appeal earlier this year, in which Justice Gary Trotter acquitted her of charges related to her arrest at the Morgentaler site in 2012.  The Crown had previously won a conviction by arguing in lower court that Gibbons had engaged in “intimidating” conduct – mainly because she was brandishing a sign depicting a crying infant – but Trotter rejected that reasoning and substituted an acquittal.

Gibbons was engaged in much the same conduct on August 7, calmly walking back and forth on the sidewalk outside the abortion site with the same sign and some pamphlets in hand. Police officers in four cruisers, as well as personnel from three Garda World security cars and two sheriff’s officers, arrested the diminutive grandmother under the watchful eye and accusing words of a Morgentaler employee.

In court, Brandes noted Gibbons has spent “inordinate” amounts of time in prison. He opined that, while he appreciated Gibbons’ beliefs and commitment to her cause, her methods of challenging court injunctions squandered time and costs expended by police and the justice system in dealing with her prosecution. He suggested her efforts and resources would be better spent by challenging injunctions head-on through litigation.

In a brief discussion with LifeSiteNews, Brandes said he couldn’t comment on why Gibbons was continuing to be prosecuted at some abortion sites, such as the “Scott Clinic,” under a 20-year-old temporary court injunction that normally would be dropped or made permanent. He also said it is up to Gibbons to decide, in consultation with her legal counsel, whether it would be wise to attempt to demonstrate outside the Morgentaler site again, even though she has either been acquitted or had charges withdrawn in the two most recent court proceedings.

He pledged before the court that should similar cases occur in the future, the Crown will be “much quicker” to withdraw charges. That was cold comfort for Gibbons, who languished at the Vanier Centre for Women in Milton for over three months as the justice system’s shenanigans ground on. On the other hand, she told LifeSiteNews after her release that the period was one of her best ever behind bars and she saw a glimmer of hope in the courts’ two recent rulings.

Two pregnant inmates likely changed their minds about undergoing abortions and were referred to the Aid to Women crisis pregnancy agency thanks to Gibbons’s counsel. As well, she led a spirited Bible study by some half-dozen inmates. “They were tuned right in and prayed like little angels,” she said of her cohorts. “I was so pleased.”

Gibbons mocked Brandes’ suggestion that she pursue legal channels to challenge various court injunctions that limit or ban pro-life demonstrations and counselling at abortion sites, noting that in contrast to the limitless resources of government via public taxation, she does not have the many thousands of dollars required to commence litigation.

“The government would save far more money by defunding abortion and cancelling police protection,” she said. She added that she received much mail while in prison, thanks mainly to interest generated by fellow activist Mary Wagner’s recent pilgrimage to Poland and the release of a Polish film documentary produced on Wagner’s story. Letters and postcards also came in from England and Germany.

She recalled the events of August 7, noting that the Morgentaler employee who came out of the building and talked to the police huffed several times about how Gibbons was using “God-talk” and “religion” to “push” her pro-life beliefs on others. In truth, said Gibbons, she has never referred to God when talking to any abortion-bound woman or her companions at the site.

What Gibbons did do, however, is tell the attending police officers that Germany had its Holocaust and what was going on in Canada was the same. She also noted wryly that the signs she has used at abortion sites and seized by the police have never been returned to her.

She said her immediate plans are to visit her mother and daughter out of town and probably be back in Toronto over Christmas. While not revealing future strategies, she said it is pro-life activists’ constitutional right to be on a sidewalk outside abortion sites and that right has to be defended.

Meanwhile, a date has been set for one of two appeals of other previous convictions levied against Gibbons for pro-life activism. It will be heard on January 16, 2015 at the Superior Court of Justice, Osgoode Hall, 130 Queen Street West in Toronto. A date has yet to be set for a hearing on the other appeal.

And there are no new developments in Mary Wagner’s appeal of virtually every aspect of her almost two-year-long trial that ended this past June, with convictions on charges of mischief and failing to comply with probation orders. Her counsel, Dr. Charles Lugosi, is still waiting for the legal reasonings behind Justice Fergus O’Donnell’s rulings, which included rejection of defence applications for access to abortion centre records, public funding, standing for a constitutional challenge and for expert witnesses to be heard.