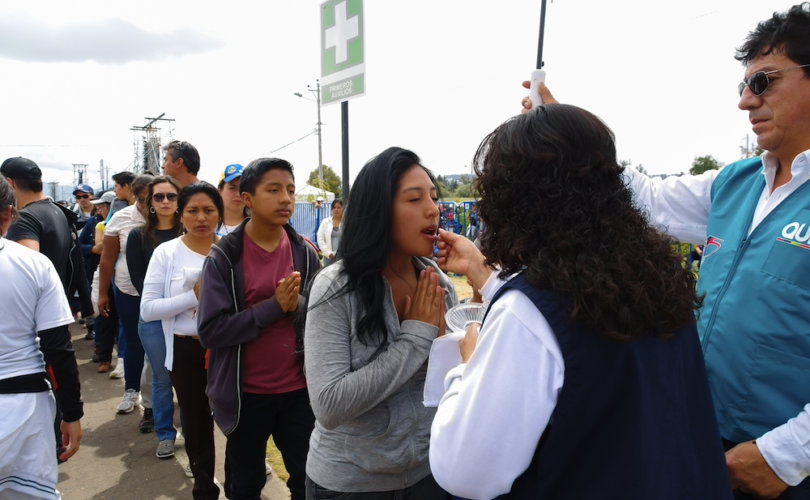 Update: In a move taken as a sign of approval, the Vatican's semi-official newspaper published the Maltese bishops' guidelines Friday morning in its print and online versions.

MALTA, January 13, 2017 (LifeSiteNews) – The bishops of Malta have given the green light to divorced and civilly remarried Catholics in their dioceses to receive Communion if they are “at peace with God.”

The bishops say it might be “humanly impossible” to follow Church teaching and live chastely while civilly remarried, a requirement for receiving the Eucharist in this situation.

The affirmation comes from the Bishops’ new document “Criteria for the Application of Chapter VIII of Amoris Laetitia,” in which they say their guidelines are “in line with the directions given by Pope Francis.”

Catholics are still awaiting a response from Pope Francis on the dubia submitted in November by four cardinals seeking clarification on ambiguous parts of Amoris Laetitia (AL) concerning marriage and reception of the Eucharist.

The Maltese bishops stated in their document:

If, as a result of the process of discernment, undertaken with “humility, discretion and love for the Church and her teaching, in a sincere search for God’s will and a desire to make a more perfect response to it” (AL 300), a separated or divorced person who is living in a new relationship manages, with an informed and enlightened conscience, to acknowledge and believe that he or she are at peace with God, he or she cannot be precluded from participating in the sacraments of Reconciliation and the Eucharist (see AL, notes 336 and 351).

Regarding conjugal continence – abstinence from relations when in a civil or other irregular marital union –the bishops say that some couples may be able to do this, but, “On the other hand, there are complex situations where the choice of living “as brothers and sisters” becomes humanly impossible and give rise to greater harm (see AL, note 329).”

Pope Saint John Paul II and Pope Emeritus Benedict XVI both taught that Catholics receiving the Eucharist while living in non-matrimonial unions must abstain from sexual relations and live chastely. Asserting the impossibility of this precept conflicts directly with the previous pontiffs’ established teaching.

The Maltese Bishops say the new guidelines are “aimed at accompanying people to an awareness of their life situation in the light of Jesus,” according to the Bishops’ website, a message also “relevant to the couples and families who find themselves in complex situations.”

Those who advocate allowing the divorced and remarried to receive Communion frequently used the term “accompaniment” during the Ordinary Synod on the Family.

Pope Francis’ exhortation has created division since before its release last April because its ambiguity in several sections allows bishops in various areas of the world the leeway to interpret the document differently.

This has resulted in some bishops’ conferences acting to allow Holy Communion for Catholics living in objective sin, while others have persisted in upholding Church teaching.

The Malta Bishops cite AL heavily throughout their document, including passages that are the subject of the dubia submitted by the four cardinals.

“By thinking that everything is black and white, we sometimes close off the way of grace and of growth, and discourage paths of sanctification which give glory to God,” (AL 305) they state in one instance.

To justify the new policy, the Maltese bishops refer to the Three Kings fleeing Herod after seeing the infant Jesus in the stable.

“Akin to the Magi, who took a different route (original emphasis) back home after meeting Jesus (see Mt 2, 12), these persons – at times after a strenuous and difficult journey – are able to meet Christ who offers them a future even when it is impossible for them to follow the same route as before,” the bishops stated. “Through accompaniment and honest discernment, God is able to open up new routes for these persons, even if their previous journey may have been one of “darkness”, marked with past mistakes or sad experiences of betrayal and abandonment.”

In one U.S. diocese’s interpretation of AL, the judgment of whether a divorced and remarried person should receive the Eucharist depends upon each individual’s own sense of God’s call.

The Diocese of San Diego, headed by Bishop Robert McElroy, stated in a document in November, “Many Catholics engaging in this process of discernment will conclude that God is calling them to return to full participation in the life of the Church and the Eucharist.”

Cardinal Burke told The Remnant in an interview last month that he agreed with Ross Douthat of The New York Times in that if this interpretation of Pope Francis’ document becomes universal, “then the Church’s teaching on marriage is finished.”

The Archdiocese of Malta and the Diocese of Gozo have directed their parishes to read a letter this Sunday at Mass explaining the new guidelines on interpreting Amoris Laetitia.

1
Dr. Robert Malone: Endless mRNA jabs are in the works as the CDC and FDA play ‘hide the data’
2
WATCH LIVE: LifeSite’s 25th Anniversary Gala – streaming now
3
New video highlights Canadian cricket farm amid ongoing push to switch out beef for bugs
4
Open letter to Elizabeth Warren: Why do you campaign so strongly for the murder of the unborn?
5
Yes, the rosary is a mighty weapon against evil. It’s the solution, not the problem
Subscribe to Daily Headlines »