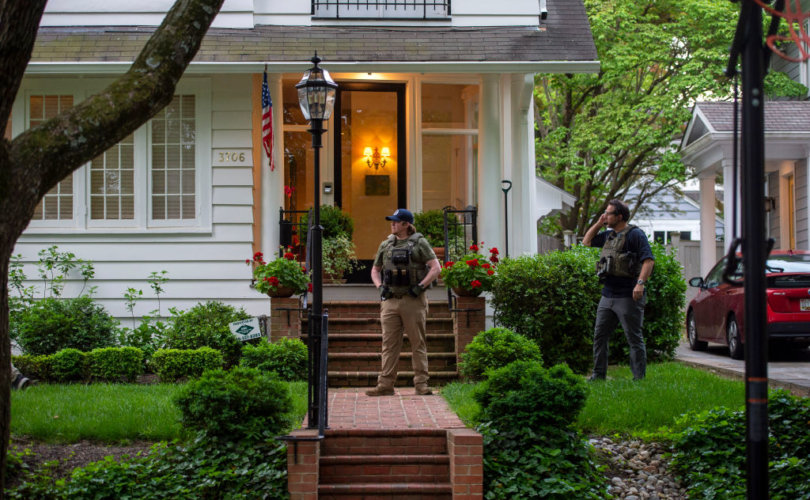 Police officers stand outside the home of U.S. Supreme Court Justice Brett Kavanaugh in anticipation of an abortion-rights demonstration on May 18, 2022 in Chevy Chase, Maryland. Protests have been organized intermittently outside the homes of justices who signed onto a draft opinion that would overturn the landmark Roe v Wade decision, which made abortion legal across the U.S. in 1973. (Photo by Bonnie Cash/Getty Images)Bonnie Cash/Getty Images

(LifeSiteNews) — A man who allegedly told police that he wanted to kill conservative Catholic Supreme Court Justice Brett Kavanaugh was arrested outside Kavanaugh’s family home at around 1:45 A.M. last night.

Although reports remain sketchy, the man taken into custody has been described by multiple sources as being in his mid-20s and carrying a California driver’s license.  A weapon — which one source identified as a gun — was found on his person as were “burglary tools.”

Two people familiar with the investigation said the initial evidence indicates the man was angry about the leaked draft of an opinion by the Supreme Court signaling the court is preparing to overturn Roe. v. Wade, the 49-year-old decision that guaranteed the constitutional right to have an abortion. He was also angry over a recent spate of mass shootings, those people said.

I can confirm the man taken into custody outside of Brett Kavanaugh’s house last night is a 26 year old white male with a California driver’s license. Previous address in Seattle.

“[And] comes on the heels of this,” she noted, “Pro-Abortion Terrorists Firebomb Buffalo Pro-Life Pregnancy Center.”

UNACCEPTABLE & comes on the heels of this…

“This is a direct result of Democrats sharing justices’ home addresses and encouraging people to go there and protest,” wrote OutKick’s Clay Travis.  “Shameful and indefensible. Thank god protection was there for Justice Kavanaugh and his family.”

This is a direct result of Democrats sharing justices home addresses and encouraging people to go there and protest. Shameful and indefensible. Thank god protection was there for Justice Kavanaugh and his family. https://t.co/nyblSdSRRE

“We are hearing that the individual arrested near the home of Justice Kavanaugh was armed and did make threats against the Justice,” said attorney and legal analyst Jonathan Turley, Shapiro Chair of Public Interest Law at George Washington University. “As discussed yesterday, the reckless rhetoric directed at the Court only fuels such extremist threats.”

“Targeting the homes of justices only increases such dangers that unhinged, violent actors will seek to mete out their own retributive justice,” added Turley in a second Tweet.  “Calls for ‘aggressive protests’ at these homes are reckless and wrong.”

…Targeting the homes of justices only increases such dangers that unhinged, violent actors will seek to mete out their own retributive justice. Calls for “aggressive protests” at these homes are reckless and wrong. https://t.co/hIY2PHdRsa

“Rhetoric has consequences, lefties,” said NewsBusters’ managing editor, Curtis Houck. “But I’m sure this won’t matter to CNN and MSNBC out there who’ve been inciting mobs against Supreme Court justices.”

Rhetoric has consequences, lefties. But I’m sure this won’t matter to CNN and MSNBC out there who’ve been inciting mobs against Supreme Court justices. https://t.co/dV7iq11gez

Chris Martin, Vice President of Bullpen Strategies in Washington, D.C., quoted Senate Majority Leader Chuck Schumer’s infamous 2020 remark, “I want to tell you, Gorsuch. I want to tell you, Kavanaugh. You have released the whirlwind, and you will pay the price.”