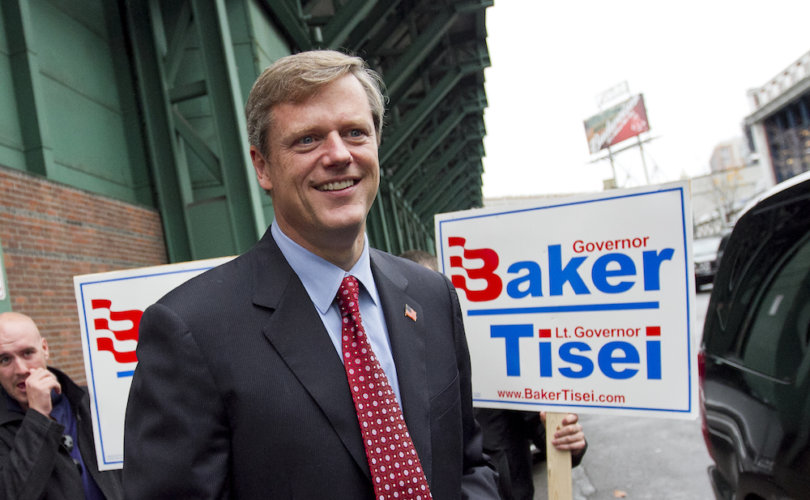 BOSTON, July 8, 2016 (LifeSiteNews) – The Republican governor of Massachusetts, Charlie Baker, has signed a law that would allow members of one biological sex to use the showers, restrooms, and other private facilities of the opposite sex.

The law, which goes into effect on October 1, adds the phrase “gender identity” to state anti-discrimination laws, placing sexual identity on par with immutable characteristics such as race and sex.

It would require “any public accommodation…without limitation” to open formerly sex-segregated facilities to members of the opposite biological sex.

In June, lawmakers overwhelmingly rejected a measure that would have barred sex offenders from entering the opposite sex's showers and private facilities. The current version of the bill allows the state to take action against anyone who exploits the law for “an improper purpose.”

That's not enough, said Andrew Beckwith of the Massachusetts Family Institute. “The definition of gender identity used by the bill, is extremely broad and ripe for abuse.  It would even allow a registered sex offender to use the law to gain access to the locker room or showers of the opposite sex. The people of Massachusetts deserve better from their government,” he said. “What is equally disturbing is that, under this new law, parents will face criminal prosecution for trying to protect their children, and business owners could be fined or even jailed just for putting up a sign deemed offensive to transgender activists.”

The state House of Representatives approved the final language of the bill on Thursday, 117-36, while the state Senate backed the bill by voice vote.

The signature makes Massachusetts the 19th state to enact state civil rights or non-discrimination laws that include “gender identity.”

After the signing on Friday, Gov. Baker tweeted:

No one should be discriminated against b/c of their gender identity; this compromise extends add'l protections to our transgender residents.

“Governor Baker has joined the growing list of fair-minded Republicans who are standing up for equality,” said Chad Griffin, the president of the Human Rights Campaign, an LGBT activist group. He also thanked a series of Democrats by name, including U.S. Senator Elizabeth Warren, Rep. Joe Kennedy III, and Boston Mayor Marty Walsh.

But the bill's opponents said the bil harms the vast majority of state residents. “This bill would take away the rights for more than 99 percent of the population – the basic right to privacy in bathrooms and locker rooms,” said state Rep. Marc Lombardo, a Republican.

Beckwith added on Friday afternoon that he was “extremely disappointed that Gov. Baker has broken his original campaign promise to veto this bill.”
Baker, a supporter of abortion-on-demand, “gave in to a radical and aggressive agenda of sexual expression and a denial of basic biological truth,” according to Beckwith

“Anatomy matters,” Beckwith said. “Requiring girls to share a locker room with anatomical boys is a bad idea, regardless of how those boys sexually identify or express themselves.”