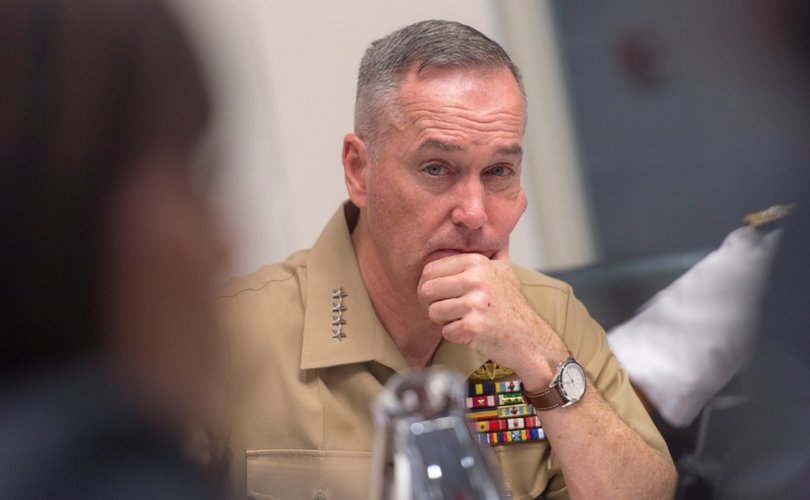 July 27, 2017, (LifeSiteNews) — U.S. Military brass will not change their policy toward “transgender” service members until President Trump sends specific guidance on his new policy to the Pentagon.

“There will be no modifications to the current policy until the president’s direction has been received by the Secretary of Defense and the Secretary has issued implementation guidance,” Gen. Joseph Dunford, the Chairman of the Joint Chiefs of Staff of the U.S. military, wrote in a letter circulating today, The Hill reported.

President Trump announced via three tweets Wednesday morning that transgender individuals were no longer allowed to serve in the military.

“After consultation with my Generals and military experts, please be advised that the United States Government will not accept or allow … [t]ransgender individuals to serve in any capacity in the U.S. Military. Our military must be focused on decisive and overwhelming … victory and cannot be burdened with the tremendous medical costs and disruption that transgender in the military would entail,” he tweeted.

Dunford’s letter appears to be only a formality. But, a CNN Pentagon correspondent reporter Barbara Starr used it to portray the general as distancing himself from Trump’s new policy.

Statement from @GenDunford @thejointstaff on POTUS transgender way ahead. What this does not include are any words of support for Trump ban pic.twitter.com/heMm38ZOgN

The new policy touched off a wave of condemnations by LGBTQ groups and their allies on Capitol Hill who began to wildly exaggerate the number of transgender troops who would be affected by the change.

“Trans” activist Bruce (“Caitlyn”) Jenner claimed that 15,000 transgender service members would be affected. But, a RAND study showed the number of active-duty “transgender” individuals serving to be “about 2,450,” the New York Times reported.

The number of “transgender” individuals serving equates to less than ¼ of one percent (0.19 percent) of the total force of 1.3 million people in the U.S. military.

Only “about 250 troops have officially come out as transgender since the Obama administration lifted the ban on transgender troops in 2016,” reported The Hill.

The Obama “transgender service” policy was slated to become permanent July 1. But, Defense Sec. James Mattis announced a six-month delay to study its effects on the military and to prepare for its implementation. One month into the review, Trump tweeted his sweeping policy reversal.

Family Research Council President Tony Perkins applauded the president for “keeping his promise to return to military priorities” and ending “the social experimentation of the Obama era that has crippled our nation’s military.”

Perkins said the new policy would save taxpayer dollars that have been wasted on a “distraction.”

“The last thing we should be doing is diverting billions of dollars from mission-critical training to something as controversial as gender reassignment surgery,” Perkins said in a statement yesterday.

“However, the cost to readiness, recruitment, retention, morale and cohesion would have been even greater under the Obama policy.  As our nation faces serious national security threats, our troops shouldn’t be forced to endure hours of transgender ‘sensitivity’ classes and politically-correct distractions like this one,” he added.