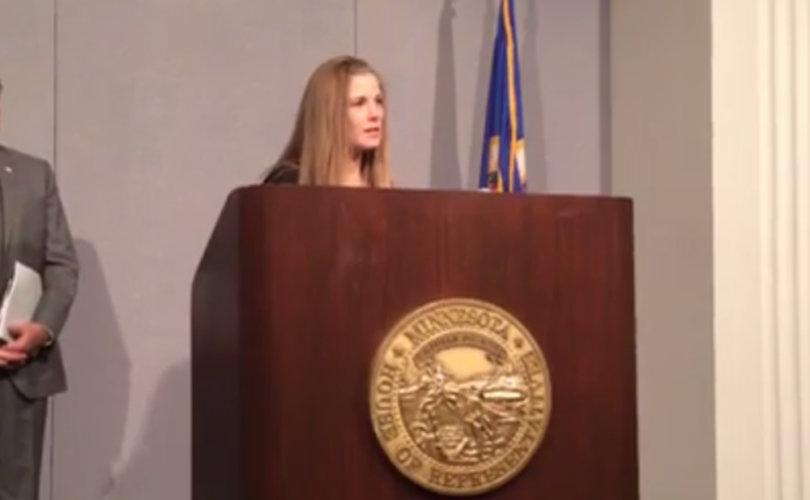 Anmarie Calgaro speaks at a news conference in Minnesota on Wednesday.

DULUTH, Minnesota, November 16, 2016 (LifeSiteNews) – A Minnesota mother sued St. Louis County and other agencies Wednesday for usurping her parental rights because her minor son has been receiving transgender “services” and given narcotic drugs without her consent.

Anmarie Calgaro’s involvement has been circumvented numerous times in regard to her 17-year-old son by the local school district, the county public health department and two medical services providers that have given her minor son medical treatment and narcotics for gender reassignment from male to female, national public interest law firm Thomas More Society says.

Each of the defendants have been handling the boy as an emancipated minor despite the absence of court declarations to that effect, according to the legal non-profit, which is representing Calgaro along with the law firm of Mohrman, Kaardal & Erickson, P.A.

“This is an outrageous abuse of power by multiple agencies,” Thomas More Society President and Chief Counsel Tom Brejcha stated. “To treat a minor child without either parental consent or a court order of emancipation is a violation of the trust placed upon the human service sector and its governmental oversight agencies. To give a parent no recourse to intervene in this situation is an egregious violation of Constitutional rights.”

Mid-Minnesota Legal Aid Clinic told Calgaro’s son in June 2015 that he was emancipated without a court order, the Thomas More Society says, even though no legal action has been taken to terminate his mother’s parental rights.

St. Louis County Schools, Independent School District 2142, is also treating Calgaro’s minor son as an emancipated minor without legal declaration, classifying him as an adult with exclusive rights to information and decision-making. The school district has denied Calgaro access to her son’s educational records and her legal authority over his educational decision-making.

The Thomas More Society also noted that, ironically, her son’s application for a name change was denied by the St. Louis County District Court due to “lack of any adjudication relative to emancipation.”

Calgaro and her attorneys held a press conference Wednesday morning along with child advocates upon filing the lawsuit in the State of Minnesota District Court.

Michele Lentz, president of the Minnesota Child Protection League (MN CPL), said Calgaro’s “rights and the welfare of her son have been outrageously trampled upon.”

“Anmarie, her family, and her son have been grievously harmed by this unconstitutional collusion of groups that exclude her from the ongoing medical, physical, and emotional care and education of her own child,” Lentz stated.

“Outside agencies cannot fully understand the physical background, personal struggles, insecurities, strengths, weaknesses, fears and dreams of her child without talking to her,” she continued. “Nor can a struggling child of 16 be considered capable of making fully informed and life-changing decisions like this. For his safety and for his welfare, Anmarie wants and needs to be involved.”

Minnesota parents are entitled to notice and hearing when their rights regarding a minor child are terminated, said Erick Kaardal, special counsel for Thomas More Society and partner at Mohrman, Kaardal & Erickson.

Minnesota law provides no recourse to challenge the emancipation status, Calgaro’s suit contends, which violates of her rights as a parent as guaranteed under the U.S. Constitution.

·        Calgaro’s son is being given unauthorized services and narcotic drugs without either parental consent or a court order of emancipation.

·        Minnesota law violates Calgaro’s federal right to due process because she has no ability to challenge the service providers’ actions without either parental consent or a court order of emancipation.

·        Calgaro has no path to object to her son’s life-changing operation under Minnesota law.

·        Minnesota Courts recognize that a minor child is not emancipated until a Court decides the child is emancipated.

·        The son has filed two petitions to establish a female name. Those requests have been denied because he has no court order of emancipation.

Lentz noted that MN CPL is also supporting Calgaro’s case because this is happening to other families around the country.