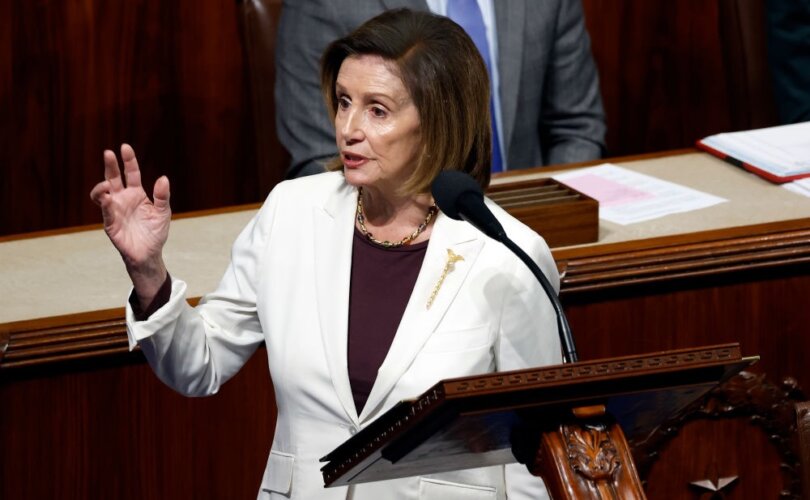 U.S. Speaker of the House Nancy Pelosi (D-CA) delivers remarks from the House Chambers of the U.S. Capitol Building on November 17, 2022 in Washington, DC. Photo by Anna Moneymaker/Getty Images

WASHINGTON, D.C. (LifeSiteNews) — Democratic Speaker of the House Nancy Pelosi, a self-professed Catholic and yet a vociferous defender of abortion, announced Thursday she will not seek re-election to her leadership role. The statement comes after Republicans were officially projected to seize control of the U.S. House of Representatives on Wednesday, delivering a blow to Democrats and the Biden administration’s national legislative agenda.

“With great confidence in our caucus, I will not seek re-election to Democratic leadership in the next Congress,” Pelosi, 82, said in an announcement on the House floor, explaining that she will remain a member of Congress to represent the people of San Francisco.

“For me, the hour has come for a new generation to lead the Democratic caucus that I so deeply respect,” she said, referring to herself as both “a devout Catholic” and “a proud Democrat.”

Nancy Pelosi: “With great confidence in our caucus, I will not seek reelection to Democratic leadership in the next Congress.” pic.twitter.com/LgUvWqPk9b

The California Democrat’s announcement came just a day after outlets officially projected that Republicans would secure a narrow majority in the U.S. House of Representatives following the 2022 midterm elections.

The Daily Wire pointed out that while the Republican majority will be slimmer than “red wave” predictions had forecast, it would have been enough to boot Pelosi from her position had she not already decided not to seek re-election.

Pelosi’s decision to step down from her leadership role marks the end of a two-decade tenure as the House’s Democrat leader.

During her time leading the Democrat party in the House, Pelosi has drawn widespread criticism from conservatives for her far-left positions on crucial moral and legislative issues including gay “marriage” and abortion. The mother of five and self-professed Catholic has consistently fought legislative protections for the unborn, even going so far as to condemn abortion restrictions as “sinful.”

Earlier this year, Archbishop Salvatore Cordileone of Pelosi’s native San Francisco handed down a pastoral directive publicly barring Pelosi from receiving Holy Communion due to her consistent defense of abortion in the national legislative arena in contradiction to Catholic teaching.

— Article continues below Petition —
Stand with pro-life priest Fr. Fidelis facing charges for trying to save unborn babies
Show Petition Text
11614 have signed the petition.
Let's get to 12500!
Thank you for signing this petition!
Add your signature:
Show Petition Text

Pelosi responded to the ban by arguing during an interview on MSNBC’s “Morning Joe” that while she “respect[s]” the views of those who oppose abortion, she doesn’t respect people “foisting” those views “onto others.”

“We just have to be prayerful, we have to be respectful. I come from a largely pro-life Italian American Catholic family, so I respect people’s views about that, but I don’t respect us foisting it onto others,” she said.

The pro-abortion House Speaker also pointed out that the pro-life movement isn’t just about abortion.

Pelosi told the outlet the abortion issue has been weaponized by the “far right,” which she said also opposes “family planning,” in vitro fertilization (IVF), and contraception. IVF and contraception are both prohibited by the Catholic Church because they separate conception from the marital act.

Controversies surrounding Pelosi family haven’t only centered around her policy positions. Earlier this year, Pelosi’s husband Paul drew criticism for purchasing $5 million in stock in a technology company that would benefit from a subsidy package slated to go before Congress. A spokesman for Pelosi attempted to wave away concerns about potential insider-trading, explaining that “The Speaker does not own any stocks” and “has no prior knowledge or subsequent involvement in any transactions.”

The report about the stock purchase came after Paul Pelosi was arrested and charged with drunk-driving in June, but the controversies didn’t end there.

Late last month, Mr. Pelosi was hospitalized after an incident in which a hammer-wielding man allegedly broke into the couple’s San Francisco home and assaulted him. While legacy media outlets attempted to frame the scenario as an example of the radicalizing power of right-wing rhetoric, reports have suggested that the alleged attacker was anything but a conservative. Rather, it was alleged that he was a Berkeley-dwelling former nudist whose home was adorned with left-wing symbols.

.@michaeljknowles reacts to the NBC report on Paul Pelosi that was taken down: “The whole thing just raises way more questions than it provides answers.” pic.twitter.com/ouLtUghiLj

On Thursday, conservative figures reacted to Pelosi’s decision not to seek re-election, with some celebrating the end of her leadership role and calling attention to the realities of her legacy.

The Pelosi era is over.

Commentator Mark Levin argued that Pelosi “was no uniter. She never demonstrated respect for our system. She always had a nasty comment.”

Nancy Pelosi is shown bi-partisan respect and media fawning despite her wretched reign over the House. She was no uniter. She never demonstrated respect for our system. She always had a nasty comment. So, the rewriting of her true legacy begins already. A sham.

Podcaster Benny Johnson joked that Trump should rip up Pelosi’s speech, referring to the incident in which Pelosi tore up a copy of then-President Donald Trump’s third State of the Union speech.

In contrast, fellow self-professed Catholic Joe Biden, also a vigorous supporter of abortion in contradiction to Church teaching, released a statement praising Pelosi for her “patriotism and dignity.”

This story is developing. Check back for updates.