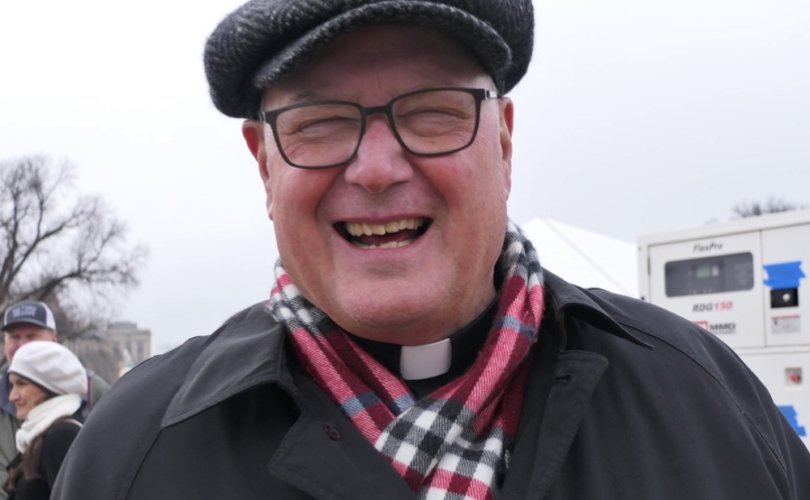 Cardinal Dolan at the 2019 March for Life in Washington D.C.Claire Chretien / LifeSiteNews

NEW YORK, January 25, 2019 (LifeSiteNews) – Archbishop of New York Cardinal Timothy Dolan responded to calls for New York Gov. Andrew Cuomo's excommunication for his role in enshrining a “fundamental right” to virtually-unlimited abortion in the state, saying via a spokesperson that excommunication is “not an appropriate response.”

Asked by CNN Religion Editor Dan Burke about the calls for Gov. Cuomo to be excommunicated over New York's new abortion bill, Dolan’s spokesman said he would “not discuss any individual,” but that “excommunication should not be used as a weapon.”

“Too often, I fear, those who call for someone's excommunication do so out of anger or frustration,” Dolan's spokesman said in the statement.

Two Catholic bishops, however, are calling for the excommunication of Cuomo for championing and signing the so-called Reproductive Health Act (RHA), earlier this week on the anniversary of Roe v. Wade. The radical abortion bill codified legal abortion up to birth in New York state law, an act of preservation by pro-aborts should Roe v. Wade be overturned by the Supreme Court.

Knoxville, Tennessee, Bishop Richard Stika and Tyler, Texas, Bishop Joseph Strickland both indicated that if Cuomo lived in their jurisdiction they would take action. Strickland urged Cuomo’s ordinaries to do so.

“Enough is enough,” said Stika. “Excommunication is to be not a punishment but to bring the person back into the Church. It's like medicine for them. But this vote is so hideous and vile that it warrants the act. But thankfully I am not in that position. Very sad.”

Bishop Strickland followed up in the early hours of Friday, and mincing no words he said the radical abortion law amounts to legalized “infanticide.”

“I’m with Bishop Stika,” he said. “I’m not in a position to take action regarding legislation in New York but I implore bishops who are to speak out forcefully. In any sane society this is called INFANTICIDE!!!!!!!!!!”

“We don’t want to excommunicate people who will wear excommunication as a public badge of honor” is an admission that leaders of the church see themselves as PR managers not the shepherds of souls.

Withholding excommunication when it should be applied is actually uncharitable! https://t.co/aZyIyzRRO6

“There comes a time when something is so egregious and boldly sinful that it must be met with strong ecclesial and canonical penalties and remedies,” Pope wrote Wednesday at the National Catholic Register.

After detailing of the “terrible bill,” Pope said, “Even worse, the “Catholic” governor of New York, Andrew Cuomo, not only signed the bill on the 46th anniversary of Roe v. Wade, but decreed a celebration.”

Note: This story is developing. LifeSiteNews will continue to update as developments occur.

I will not discuss any individual. Anything that follows is a statement of some general principles, and should not be considered to be a comment on any specific person.

Second, notable canon lawyers have said that, under canon law, excommunication is not an appropriate response to a politician who supports or votes for legislation advancing abortion.

Third, from a pastoral perspective, if a pastor – and a bishop is certainly a pastor of a diocese – knows of a grave situation involving a parishioner, it is his duty to address that issue personally and directly with the parishioner. That was the approach of Cardinal O'Connor and Cardinal Egan (both of whom I served), and it is Cardinal Dolan's approach as well.

Fourth, and finally, from a strategic perspective, I do not believe that excommunication would be effective as many politicians would welcome it as a sign of their refusal to be “bullied by the Church”, thinking it would therefore give them a political advantage. (See, for example, the case of Bishop Leo Maher and Lucy Killea).