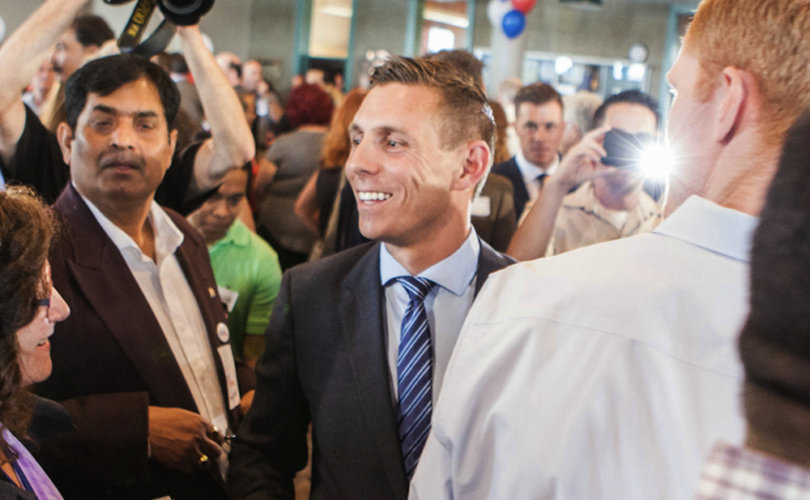 PC Conservative MPPs Sam Oosterhoff, Monte McNaughton and Rick Nicholls were not in the House for the vote.

The far-reaching Bill 163 automatically outlaws all pro-life activity — including sidewalk counselling and showing “disapproval” of abortion — within 50 meters of Ontario’s eight abortion centers, a distance that can be increased to 150 meters on request.

Bill 163 also allows hospitals, pharmacies, and healthcare facilities that do abortions, including providing the abortion pill — to apply for “bubble zones” banning all pro-life activity of up to 150 meters.

“This law, which was drafted by Planned Parenthood and their allies in the abortion business, using feeling-based anecdotes and hearsays, lacked any real evidence that backed their claims of the war-like atmosphere outside abortion facilities,” said Jim Hughes, national president of Campaign Life Coalition.

“This law is the first step in silencing and criminalizing speech that is not the official opinion of the state. The whole process of fast-tracking this bill, and slandering pro-life people throughout, was a shame.”

Campaign Life Coalition will “pursue if necessary a challenge through the legal system to overturn this totalitarian law which directly attacks the freedom of speech, expression and assembly of Ontarians and prevents pregnant women from having access to alternatives to abortion,” it said in a press release.

Liberal Attorney General Yasir Naqvi introduced the bill on October 4. PC Party leader Patrick Brown declared the same day that he was pro-abortion and supported the bill, and PC MPP Lisa MacLeod introduced a motion the next day to expedite the bill.

After the Liberals were lambasted in the press for rejecting the motion allegedly to divide the Tory caucus over abortion, the three parties agreed to unanimously fast-track the legislation.

MacLaren, considered an independent because his party lacks the eight MPPs needed to be recognized as a party at Queen’s Park, also cast the sole vote against Bill 163 on second reading.

He told LifeSiteNews then the bill is unconstitutional and voting against it was “the right thing to do.”

No evidence for bill

According to Naqvi, the impetus for Bill 163 came from Ottawa mayor Jim Watson, who asked for it after staff at the Morgentaler abortion center on Banks Street alleged that pro-life protestors were harassing and intimidating women as they approached the abortion facility.

There was a alleged incident of someone spitting on a woman.

But pro-life blogger Patricia Maloney obtained through a freedom of information request a record of Ottawa police attendance at the Morgentaler abortion center from January 2014 to June 2017.

“There were a total of 64 police reports for this period, most of which most were false alarms, cancelled calls, administrative issues, and other minor issues,” Maloney wrote.

Maloney spoke with Constable Chuck Benoit at the Ottawa Police Service who confirmed the two “level 1” assaults in that period, on October 25, 2016, and May 28, 2017.

“All the other incidents were run of the mill police work,” she wrote.

“I was told that neither of these assaults resulted in injuries, and no one was charged with anything. So why do we need this bubble zone? Why did Jim Watson initiate this law?” Maloney noted.

“Because he doesn’t like pro-life people. He prefers to treat us like second class citizens. If we try and discuss pro-life concerns with him, either by email or in person, his disgust for us is clear.”

One day of public hearings only

Campaign Life Coalition also debunked the “toxic narrative” of pro-lifers harassing women in a presentation to the committee on general government during the sole day of public hearings on the bill.

“It is a problem made up by the abortion industry and their allies at Planned Parenthood to demonize their opposition and to protect their grisly business of killing children before birth for profit.”

Five pro-life groups presented on the bill during the hearings, as did eight abortion advocacy groups, and pro-bill Ottawa city counselor Catherine McKenney.

When Planned Parenthood Ottawa executive director Catherine Macnab spoke to the committee, observers were asked to leave the room halfway through her presentation so Macnab could speak to the committee “in camera,” according to Campaign Life’s Wojciechowski.

“So much for transparency and ‘public hearings,’” he told LifeSiteNews..

The Catholic Civil Rights League (CCRL) and the Association for Reformed Political Action (ARPA) reiterated to the committee that the bill violates Charter rights of freedom of association and expression.

Similar legislation passed in BC in 1995 was challenged in court, he said.

The BC appeal court ruled in Spratt in 2008 the law violated Charter rights to free expression but the breach was “demonstrably justified in a free and democratic society” as allowed under Section 1 of the Charter.

But Ontario’s law does not pass the Section 1 test, Horgan told the committee.

He submitted a peer-reviewed study presented by abortion advocates and published last year in Canadian Family Physician reported on a 2012 survey of abortion facilities across Canada.

Of the seven Ontario abortion facilities responding to the survey, one reported “no violence or harassment,” Horgan said.

The other six abortion centers reported “picketing without interference,” and “zero picketing with interference, zero vandalism, zero other forms of violence or harassment including threatening emails or telephone calls,” he said.

“The reality is a peaceful protest should not cause anybody harm. That’s democracy,” Horgan said.

“When you go another point to say it’s non-peaceful protests, there could be violence, where’s the evidence of that?”

Horgan also blasted Ontario’s MPPs for the “political suppression engaged with this bill.”

“The rushed nature of it, the fact that there is effectively all-party support, is an example of suppression of dissenting viewpoints,” Horgan said. “It’s contrary to the process of authentic pluralism that we enjoy in Canada.”

Tabitha Ewert told the committee on behalf of ARPA that Bill 163 is unnecessary and unconstitutional.

“There is just no evidence that without this bill women’s safety or access to abortion would at all be infringed. … (W)e have Criminal Code prohibitions that prohibit such things as assault, threatening, intimidation, or harassment,” Ewert said.

The bill is actually “about silencing dissent on the issue,” she said.

“And that is what this bill does. It says if you hold a certain opinion, you cannot express it. Your constitutional rights are not protected.”

The committee made no amendments to the bubble zone bill, which is now only needs royal assent to become law.