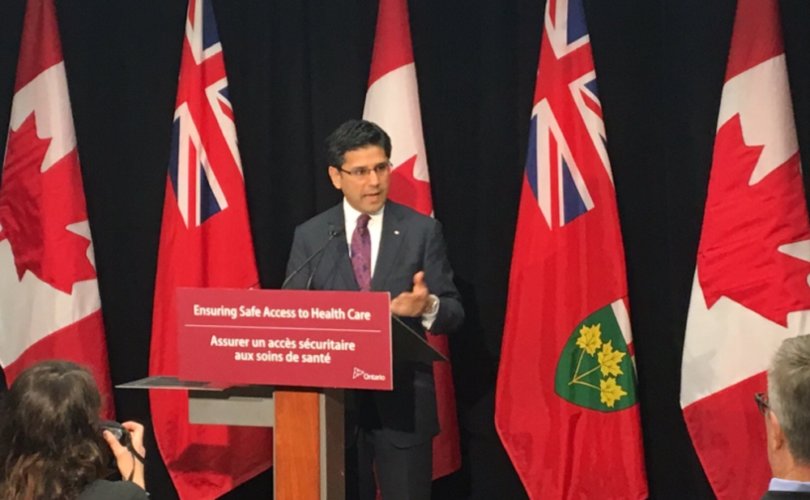 MPP Jack MacLaren, a member of the Trillium Party, voted against Bill 163 on second reading Tuesday.

Eighty-five of the 107 MPPs at Queen’s Park voted for the bill, which now goes to committee for one day of public hearings Thursday.

The “bubble zone” bill is set to pass next Tuesday after all three main parties — Liberals, Conservatives, and NDP — struck a deal to unanimously fast-track the legislation.

“I was thrilled to know that the other two political parties support this approach and this legislation. That was music to my ears,” Attorney General Yasir Naqvi, who introduced the bill October 4, said during the three-hour debate on the bill Monday.

The far-reaching legislation automatically bans pro-life witness, including picketing and sidewalk counselling, within 50 meters of Ontario’s eight abortion centers, a distance that can be increased up to 150 meters upon request.

Bill 163 also allows hospitals, pharmacies and any other healthcare facilities that provide abortion, including medical abortion, to apply for “bubble” zones of up to 150 meters.

The bill automatically bans all pro-life activity within 150 meters of the homes of abortion providers and abortion center staff.

The bill includes a “general anti-harassment provision to protect providers of these services, wherever they are, from harassing conduct directed at them,” Naqvi said Monday.

Tories voted for or weren’t there

Campaign Life tweeted out its praise for MacLaren:

QP voted on 2nd reading of #Bill163. Many voted yes, many didn’t show up, only one took stand to defend #freespeech. @jackmaclaren1 #onpoli pic.twitter.com/kkuEuBshkd

But they blasted other MPPs.

“I cannot believe that so many elected representatives who have sworn to uphold our constitution have voted to violate the Charter by taking away our right to free speech,” Fonseca said.

“The greater shock is some of the people who voted in favour of abortion, in favour of protecting an industry the corporate object of which is to make profit by killing children before birth,” he told LifeSiteNews.

“It’s devastating to see a formerly strong MPP in Rick Nicholls succumb to Patrick Brown’s bullying and vote for the killing of children in utero,” Fonseca said.

He also blasted Liberal MPP Rinaldi, who has identified as pro-life in the past.

As for MacLaren, he told LifeSiteNews he voted against Bill 163 because it was “the right thing to do.”

The MPP for Carleton-Mississippi Mills described the bill as “taking a sledgehammer into a china shop” and that its restrictions on freedom of speech are “absolutely” unconstitutional.

While MacLaren was “proud” to be the only one voting against the bill, “it would have been nice if there were a whole lot more doing the same thing,” he said.

MacLaren is listed as an independent because the Trillium Party lacks the eight MPPs needed to be recognized as a party at Queen’s Park.

“I’m happy to see that the government has come to the table at this point in time and we are going to pass it,” she said. “We think the bill is perfect as is, so we’re not going to be submitting any amendments.”

MacLeod had tabled a motion October 5 to unanimously pass the bill, but the Liberals refused to pass it.

They were then accused by media and opposition MPPs of playing politics with abortion.

Since then, the parties evidently reached an agreement, and deputy premier Deb Matthews introduced a motion Monday to fast track the bill, which was passed by a handful of MPPs in an almost deserted chamber.

“We will be having our supporters in ridings deliver more to their local MPP constituency offices,” Fonseca said.

To sign the CLC petition against Bill 163, go here.

MPPs who voted no on Bill 163 on second reading: