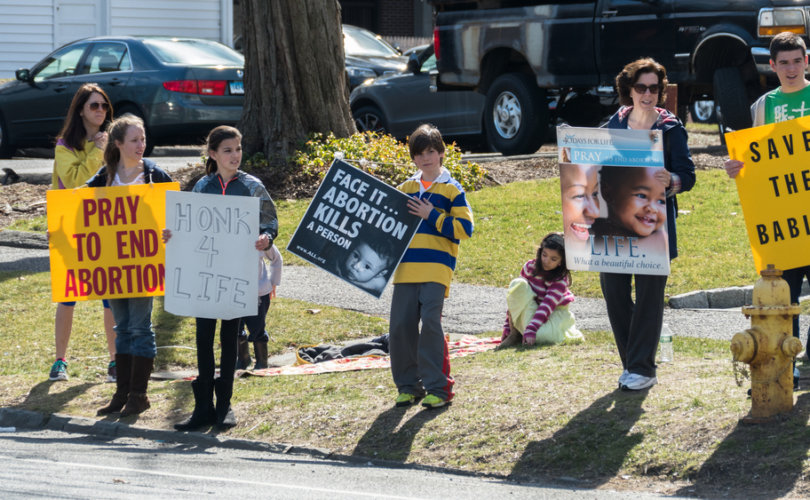 “In an increasingly polarized society, it is critical that we protect a woman’s right to choose,” Attorney General Yasir Naqvi said in a press conference Wednesday before tabling Bill 163 at Queen’s Park.

“It is critical those protections be enshrined in law to ensure that they cannot be rolled back,” he said.

The far-reaching proposed law would ban pro-life activity within 50 meters of the province’s eight “dedicated” abortion centers, a distance that could be increased to 150 meters on request.

If an abortion facility moved, the bubble zone would move with it.

The proposed law would also establish a 150-meter bubble zone around the homes of all abortionists and abortion center staff, Naqvi said.

That zone would move with the abortion providers, to “protect” them wherever they are, he said.

The Liberals are “mounting an attack on women by seeking to prevent pro-lifers from offering mothers accurate information and alternatives to the violence of abortion, said Campaign Life president Jim Hughes.

“Bubble zone legislation isn’t about protecting women and abortion staff workers from violence, because there is no evidence of such violence,” he added.

Hughes said the proposed law is “about silencing peaceful pro-life witnessing and preventing women from having access to alternatives.”

“This is another attempt by the Wynne government to do the abortion industry’s dirty work, by preventing people who care deeply about women and their pre-born children from providing them help and support,” she said.

Campaign Life is urging pro-life advocates to lobby their MPPs to stand up for the freedom of speech of all Ontarians and to not cave to the abortion industry’s demands.

The bill would also allow other healthcare locations that provide abortion — including the abortion pill — to apply for a bubble zone.

This would likely mean that pharmacies, hospitals, and other healthcare centers could apply for a “safe access zone” if they felt it was needed.

Those found in contravention of the newly proposed law could be fined up to $5000 and sentenced to up to six months in jail for a first offense.

Those convicted of a second offense could be fined up to $10,000 and sentenced to up to a year in jail.

Naqvi did not deny Ontario’s proposed bill is more far-reaching than the bubble zone laws currently in force in British Columbia, Newfoundland, and Quebec.

“We like to think we are leading in the country,” he told reporters.

The Liberals promised bubble zone legislation back in May after Ottawa mayor Jim Watson requested it.

Watson, in turn, had been lobbied by staff at the Ottawa Morgentaler abortion center and Planned Parenthood.

Their allegations that pro-life witnesses were harassing women coming into the facility and police were turning a blind eye were amplified by a sympathetic media.

“We have heard reports that anti-abortion protests have increased across the province. In my hometown of Ottawa, protests at the Morgentaler clinic have reportedly escalated,” he said.

Naqvi mentioned twice that he’d heard a woman had been “spat on” outside Ottawa’s Morgentaler abortion facility.

But Ottawa pro-life witness Cyril Winter, 69, told LifeSiteNews in an earlier interview the allegations against pro-lifers were “vicious, lying and libelous.”

And the media had it backward about who’s a threat to whom, Winter said. “I get harassed all the time. And these articles have unleashed a torrent of abuse.”

Despite there being bubble zones injunction already in place at various abortion clinics, Naqvi told reporters that the new law will offer “universal protection for all abortion clinics across the province” and at the “homes of abortion service providers.”

As for enforcing the far-reaching bill, the proposed law’s regulations will include demarcation lines of the zones for the eight “dedicated” abortion centers, so people will know to “govern themselves accordingly,” Naqvi said.

The ministry already has plans for working with police forces across the province to instruct them on enforcing the proposed bill, he said.

To find out who your MPP is, go here.