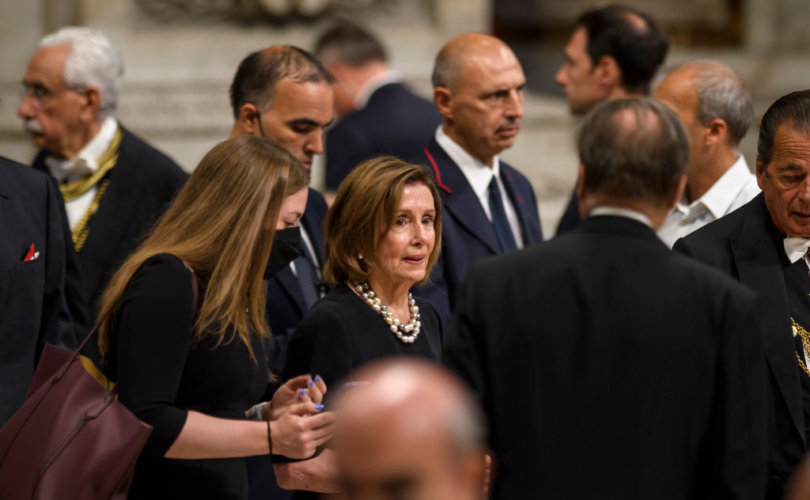 VATICAN CITY (LifeSiteNews) – Speaker of the House Rep. Nancy Pelosi has reportedly received Holy Communion at a Mass presided over by Pope Francis this morning, despite being banned from receiving Communion by her local ordinary, San Francisco Archbishop Salvatore Cordileone.

The Democrat leader flew to Rome for a special meeting with Pope Francis, at which she received a blessing, before attending Mass in St. Peter’s Basilica.

Pelosi then received Holy Communion from a priest at the Mass.

According to the teaching of the Catholic Church, Pelosi’s vocal and persistent support for the killing of unborn children precludes the high-profile politician from receiving the Body and Blood of Christ, due to the gravely sinful and scandalous nature of both murder and the sacrilegious reception of Holy Communion.

“[Y]ou are not to present yourself for Holy Communion and, should you do so, you are not to be admitted to Holy Communion, until such time as you [publicly] repudiate your advocacy for the legitimacy of abortion and confess and receive absolution of this grave sin in the sacrament of Penance,” Cordileone wrote to Pelosi in a “notification” last month.

Pope Francis, however, previously expressed opposition to barring pro-abortion politicians from Holy Communion, claiming that priests should accompany such legislators with “compassion and tenderness”.

Fresh from condemning the Supreme Court’s ruling to overturn Roe v. Wade on Friday, Pelosi’s decision to receive Holy Communion on the Solemnity of Saints Peter and Paul at a Mass presided over by Pope Francis represents a significant development in her dissent from Church teaching.

Responding to Archbishop Cordileone’s move to ban her from Holy Communion in May, the 82 year-old Democrat had said she didn’t respect pro-life people “foisting” their views on others.

Today she told diplomats in Rome that “faith is an important gift, not everyone has it but it is the path to so many other things.”

The Catholic Church teaches that the Eucharist is the literal Body, Blood, Soul, and Divinity of Jesus Christ, and that no Catholic who has committed a mortal sin is to present himself or herself for Holy Communion until he or she has confessed that sin in the Sacrament of Confession.

Cordileone’s statement made clear to Pelosi that a “Catholic legislator who supports procured abortion, after knowing the teaching of the Church, commits a manifestly grave sin which is a cause of most serious scandal to others.  Therefore, universal Church law provides that such persons ‘are not to be admitted to Holy Communion’ (Code of Canon Law, can. 915).”

While Pelosi continues to claim she is Catholic, despite rejecting Magisterial teaching on the sacredness of human life and a host of other moral issues, Bl. Pius XII’s 1943 encyclical, Mystici Corporis, states that “only those are to be included as members of the Church who have been baptized and profess the true faith, and who have not been so unfortunate as to separate themselves from the unity of the body, or been excluded by legitimate authority for grave faults committed (n. 22).”

Putting her further at odds with Catholic teaching, the California Democrat took to MSNBC in late May to attack Cordileone’s decision and his opposition to LGBT “marriage”, saying abortion was a “front man” for the pro-life movement’s opposition to contraception and in-vitro fertilization (IVF).

“This is not just about terminating a pregnancy,” Pelosi told Morning Joe viewers on MSNBC, adding that the “same people are against contraception, family planning, in-vitro fertilization … it’s a blanket thing and they use abortion as the front man for it while they try to undo so much.”

The Democrat claimed that, coming “from a largely pro-life Italian American Catholic family,” she respects people’s views about abortion, but doesn’t “respect us foisting it onto others.”

“Now our archbishop has been vehemently against LGBTQ rights,” she continued. “In fact, he led the way in an initiative on the ballot in California, so this decision taking us to privacy and precedent is very dangerous in the lives of so many of the American people.”

Pelosi doubled down in her support for abortion on Friday by slamming the Supreme Court’s historic decision to overturn Roe v. Wade.

Pelosi described the ruling as “outrageous and heart-wrenching,” and said that was achieving the Republican Party’s “dark, extreme goal of ripping away a woman’s right to make their own reproductive health decisions.”

While Archbishop Cordileone was supported by a number of U.S. bishops in his decision to ban Pelosi from Holy Communion, a spokesperson for Cardinal Wilton Gregory of the Archdiocese of Washington, D.C., said the prelate “has not instructed the priests of the [archdiocese] to refuse Communion to anyone.”