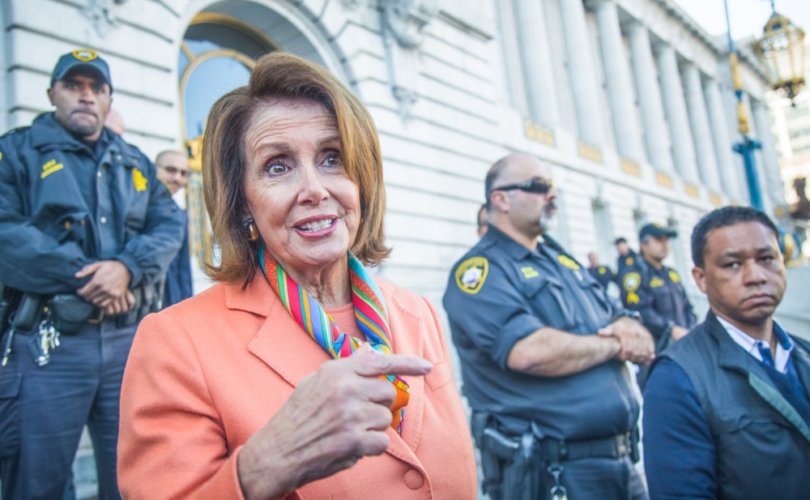 WASHINGTON, D.C., January 25, 2021 (LifeSiteNews) — House speaker Nancy Pelosi will deliver the article of impeachment voted on by the House two weeks ago to the Senate Monday night. The impeachment trial, which will be the first to take place after the end of a president’s term, will begin on February 8. Senate president pro tempore Sen. Patrick Leahy (D-VT) is expected to preside over the trial. Usually, the chief justice of the Supreme Court — currently John Roberts — presides over impeachment hearings. In this case, however, a sitting president is not being tried, so the usual rules do not apply.

The single impeachment article approved by the House charges Trump with “incitement of insurrection” over the January 6 Capitol riot. President Trump never called for violence or insurrection in the speech he delivered in D.C. on January 6 that ended thirty minutes after the riot had begun.

Democrats would need 17 Senate Republicans to join them to convict Trump. At least 29 GOP senators oppose even holding the trial.

“If it is a good idea to impeach and try former Presidents, what about former Democratic Presidents when Republicans get the majority in 2022?” Sen. John Cornyn (R-Texas) tweeted on Saturday. South Dakota’s Sen. Mike Rounds called the trial a “moot point,” adding that “it’d be one that they would have a very difficult time in trying to get done within the Senate.”

“Such a gratuitous, meaningless effort by the Senate of the United States is neither worthy of our great institution, nor a service to the Nation and the American people,” Sen. Lindsey Graham (R-SC) wrote in a letter to Senate majority leader Chuck Schumer (D-NY) last week.

The details of the trial in the evenly split Senate are set to be worked out between Sen. Schumer and Senate minority leader Mitch McConnell (R-KY). While McConnell said last week that rioters at the Capitol on January 6 “were provoked by the president,” he has not revealed how he will vote on February 8.

Although Democrats, including Nancy Pelosi, have claimed that convicting Trump would help unify the country, national polling consistently has shown that a bare, largely partisan majority supports the the president’s conviction.