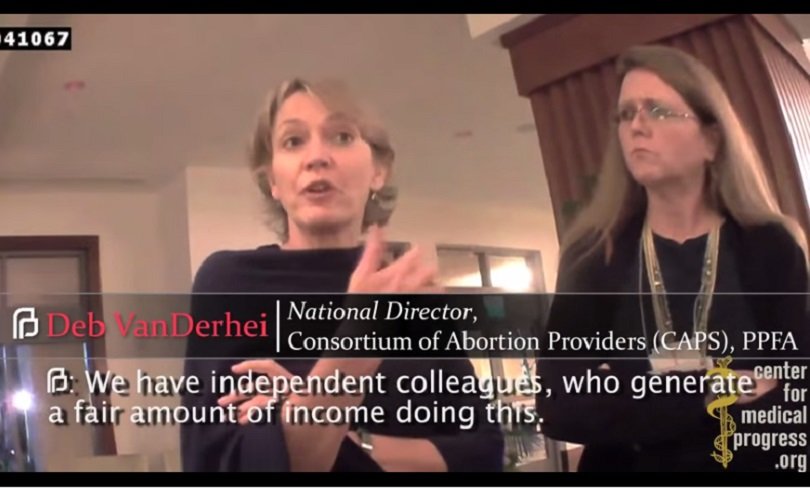 September 15, 2015 (LifeSiteNews) – Planned Parenthood officials are proud of being able to harvest “fresh” babies' organs, including eyes and genitals, and admit such practices “generate a fair amount of income” in the latest video released by the Center for Medical Progress, released this morning.

The video, the fourth in CMP's “Human Capital” series, captured abortion industry leaders saying that money for aborted babies' body parts is a “valid exchange” – but the organization will not be “bullied by ridiculous laws.”

Leaders also admit the national office deliberately keeps all discussion of such activity at arms-length, and exposing the gruesome undertaking could be “a huge PR issue.”

In the latest video, Dr. Carolyn Westhoff – who is the senior medical advisor for the Planned Parenthood Federation of America (PPFA) – tells undercover investigators they are able to extract a wide variety of organs from aborted babies.

“We’ve just been working with people who want particular tissues, like, you know, they want cardiac, or they want eyes, or they want neural…Oh my God, gonads,” Dr. Westhoff says.

“Everything we provide is fresh,” she boasts.

That echoes the organization's fourth video, which showed techs combing through aborted babies' body parts and proclaiming, “It's another boy.”

In the new video, Dr. Westhoff then offers to introduce the faux organ buyers to “national office abortion people” to facilitate their specific purchases. But all such interactions must be discreet.

“Obviously, we would have the potential for a huge PR [public relations] issue in doing this,” Dr. Westhoff says.

Other abortion industry officials are caught agreeing with the potential fallout.

“It’s an issue that you might imagine we’re not really that comfortable talking about on e-mail,”Deborah VanDerhei, the director of Planned Parenthood's Consortium of Abortion Providers (CAP), affirms.

Dr. Deborah Nucatola, who was featured eating salad during a business lunch in the first investigative video, has a similar assessment.

“There are no guidelines” from Planned Parenthood's national office on organ procurement and payment, Nucatola tells them. “There will never be guidelines.”

Nonetheless, VanDerhei tells CMP investigators, “We have independent colleagues who generate a fair amount of income doing this.”

That comment seems to undermine Planned Parenthood's continual assertions that they make no money from its “fetal tissue donation” program, which it presents as a “humanitarian undertaking.”

In the video, Vanessa Russo, compliance program administrator for Planned Parenthood Keystone in Pennsylvania, defends the practice wholeheartedly — even if it runs afoul of federal laws. “A company like this that wants to give our organization money for the tissue–I think that that’s a valid exchange, and that that’s OK,” she says.

U.S. statutory law makes it a federal felony to receive “valuable consideration” – that is, economic profit of any sort – in exchange for human organs, something abortionists deny they receive.

“We feel like we can't consent to be bullied by ridiculous laws,” Russo says.

“Planned Parenthood runs their abortion and baby parts business in open disregard for the law and should be prosecuted immediately,” says David Daleiden, Project Lead for CMP.

But PPFA leaders worry about the optics of trading in organs. Dr. Vanessa Cullins, vice president for external medical affairs for PPFA, worries on camera, “This could destroy your organization and us, if we don’t time those conversations correctly.”

However, VanDerhei states she has been trying to manage potential fallout with the abortion industry as a whole. She tells them she has “been talking to the executive director of the National Abortion Federation. We’re trying to figure this out as an industry, about how we’re going to manage remuneration, because the headlines would be a disaster.”

Daldeiden says this should rip the mask off the organization's brutality.

“From e-mail blackouts to contorted oxymorons like ‘donation for remuneration,’ the lengths to which Planned Parenthood leadership will go to cover-up their illegal sale of aborted baby parts are nothing less than the desperation of a guilty conscience,” Daleiden says.

The newest video comes during Congressional investigations – sparked by its previous video releases – as well as a brewing Capitol Hill fight to defund the nation's leading abortion provider.

“Planned Parenthood CEO Cecile Richards openly admits they receive ‘$60 per tissue specimen,’ and their contracts with StemExpress offer payments per fetus ‘determined in the clinic to be usable,’” Daleiden says.