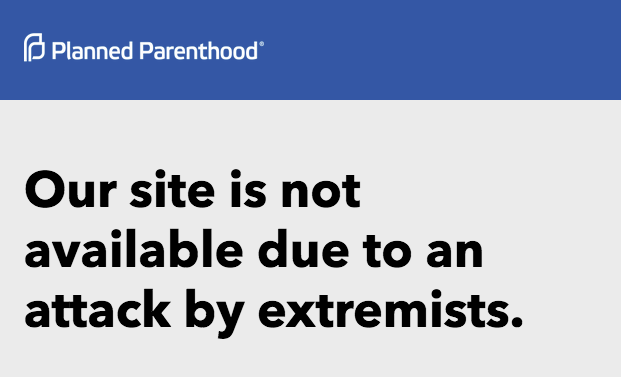 July 30, 2015 (LifeSiteNews) – At the same time as a fourth video exposing Planned Parenthood's practice of harvesting and selling aborted baby body parts was released Thursday morning, visitors who attempted to access Planned Parenthood's website were greeted with a message saying, “Our site is not available due to an attack by extremists.”

The page announcing the attack stated that “200,000 people a day are now being blocked from information and care by this attack,” and directed visitors who wanted to find out more to Planned Parenthood Action Fund's Facebook page.

At that Facebook page, the abortion giant states that the attack is a “new low” by anti-abortion extremists, and asks for donations to help them “fight back.”

However, some are raising questions about the purported attack, pointing out that a look under the hood shows that content from the site appears to be loading without a problem from Planned Parenthood's web server, while they have categorized the “site down” message as a “campaign.”

At The Federalist, Sean Davis points out that the splash page also directs users to another page at ppaction.org where they can write their “story” about where they “stand” on Planned Parenthood, in the process of which Planned Parenthood collects their personal information.

“That’s right,” says Davis. “Even though ppaction.org redirects to a page saying the site was hacked, the domain still house (sic) a perfectly functional URL and page that are being actively used to help build Planned Parenthood’s fundraising list.”

Some hours after the original message was put up, Planned Parenthood changed the message to say simply that the website was “undergoing maintenance.”

However, in comments to CNN Wednesday, Dawn Laguens, Planned Parenthood’s executive vice president, said that the website was originally brought down briefly on Wednesday by a distributed denial of service attack. “Although our websites were back online shortly after the attack, in order to ensure that we are fully protected, we’ve made the decision to take our website offline for a day,” she said, according to Jezebel.

The alleged attack comes days after Planned Parenthood had issued a statement claiming that “extremists” opposed to their agenda, “have called on the world’s most sophisticated hackers to assist them in breaching our systems and threatening the privacy and safety of our staff members.”

At that time LifeSiteNews spoke with cybersecurity experts who said the attack appeared to be legitimate, but that it was not as sophisticated as Planned Parenthood claimed, given the outdated version of the abortion behemoth’s webserver.

The abortion giant has been reeling in recent weeks from a series of undercover videos, which appear to show high level Planned Parenthood staff negotiating to profit from the sale of body parts harvested from aborted babies. The videos have also shown the staff describing how they alter the abortion procedure to procure the best specimens possible.

No one has claimed responsibility for the attack.

“Planned Parenthood says it’s been hacked by 'extremists,' but a review of the publicly available evidence suggests that the only things being hacked at Planned Parenthood right now are perfectly healthy and viable unborn babies,” said Davis.

‘Who are we to judge?’: Tolerance, widow-burning, and Planned Parenthood