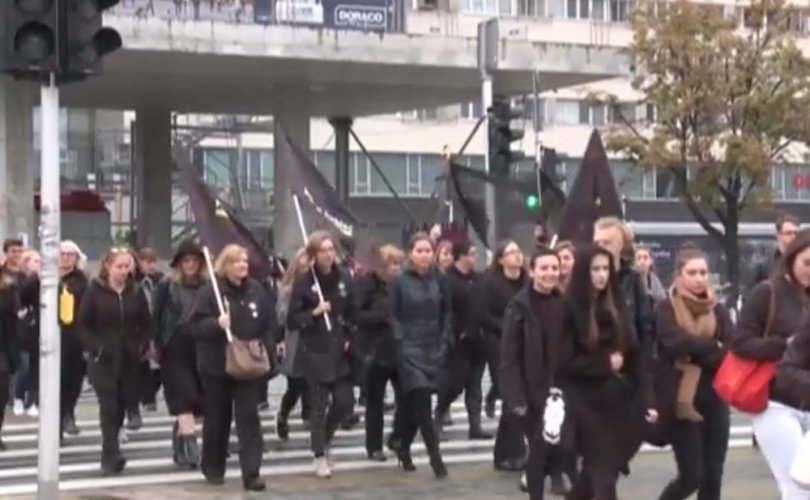 Polish women march in protest of a proposed abortion ban.

The bill was written by Ordo Iuris lawyers and spearheaded by pro-life groups and not by any political parties. In a three-month period, the petition received almost half a million signatures of support among Poles.

The Sejm’s rejection was a surprising turn of events since only two weeks ago it voted 267-154 to continue the legislative process on the “Stop Abortion” measure and tossed out a “Save Women” bill proposing abortion on demand (up to 12 weeks) by a margin of 230-173.

The “Save Women” proposal, presented by abortion advocates, also sought inclusions for the health of the mother with no specific time limit and fetal deformity up to 24 weeks. The pro-life bill would have completely banned abortions, only allowing for medical intervention to save a mother’s life.

On September 23, the pro-life draft was sent to the Sejm’s Commission of Justice and Human Rights (the Commission) to allow for further deliberations.

But, in fact, there were no such discussions. The day before the ultimate rejection of the “Stop Abortion” bill, the Commission suddenly met to vote on the rejection recommendation. Ignoring the norm of a three-day notice, the members of the Commission were called into Parliament with text messages shortly before the meeting. There was no discussion, and the experts and authors of the bill were not allowed to speak.

Witold Czarnecki from Law and Justice (Pis) party and a group of the opposition party Civic Platform recommended killing the abortion ban, which was done quickly despite protests from the politicians of the opposition. Strangely, the Civic Platform, which is against the ban, wanted to prevent the bill from being killed to continue their political fight.

The ruling Law and Justice party apparently could not take the heat after a weekend of the pro-abortion and anti-government “Black Protest”, widely promoted by the media.

Further pressure on Poland’s government came from the European Union. An October 5 “debate” in the European Parliament, conducted by “proud lesbian” Urlike Lunacek and organized by the Communists and Socialists on Polish “women’s rights”, proved too much for the Polish ruling party.

Asked what really scared off the Law and Justice politicians, Mariusz Dzierżawski from the Right to Life Foundation said, “I don’t know. Maybe some instructions were sent from Brussels, from some important people.”

Shortly after the Black Protest, conservative politician Jarosław Gowin told Radio Koszalin that the demonstrations gave them a lesson in “humility.” He also added that he doesn’t deny the “good intentions of the big part of protestors.”

In his radio appearance, Gowin said he wanted to “calm down those who fear the total abortion ban.” He explained that abortion in the case of rape and threat to mother’s health and life would certainly not be banned. Gowin, the minister of science and higher education, also vowed not to interfere with the spread of gender studies in public universities.

Meanwhile, Jerzy Kwaśniewski from Ordo Iuris told the website pch24 that while the Monday Black Protest gathered less than 100,000 people in all of Poland, more than 200,000 took part in pro-life marches in June. “There is disproportion between the support of life, which is about two-thirds of Poland’s population, and the radical abortion movement,” he said. Kwaśniewski vowed not to give up until every unborn’s life is legally protected.

Ryszard Terlecki, the spokesman for Law and Justice, said during a press conference that his party did not support punishing mothers for abortions, a provision in the Ordo Iuris abortion bill. He said the Polish bishops had similar views. To save the bill, Ordo Iuris tried to correct its draft eliminating the punishment provision, but the speaker of the house did not allow it.

Terlecki said his party would prepare its own project, “limiting abortions on children with Down’s syndrome.” Prime Minister Beata Szydło said her government would draft a bill with financial support for families with special needs children.

Asked if the “Stop Abortion” bill was too harsh, Dzierżawski replied, “It was a very humane and gentle project for the children whom we wanted to save.”