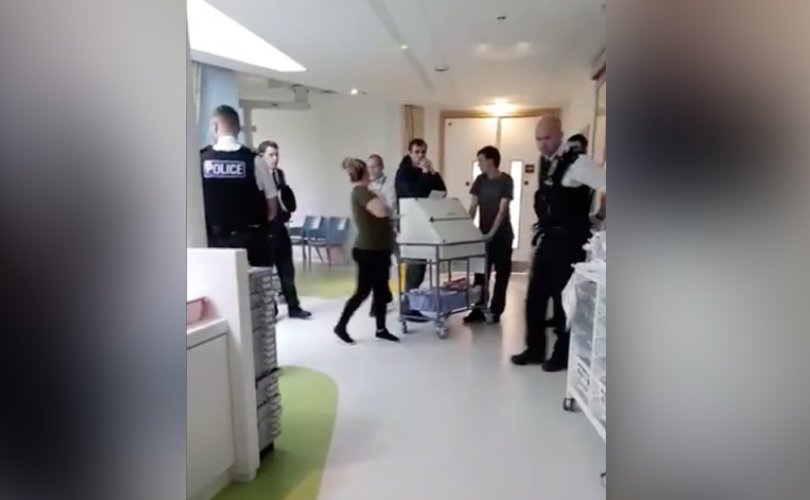 LIVERPOOL, England, April 12, 2018 (LifeSiteNews) – Parents of Baby Alfie Evans are saying that police are blocking them from leaving Alder Hey Children’s Hospital even though they have a document from their legal representatives saying that their child is free to leave.

Alfie Evans’ parents are being prevented from removing their son from the hospital that wants him to die.

While the drama unfolds at Alder Hey Children’s Hospital in Liverpool, LifeSiteNews has obtained a letter to Alfie’s father Tom from a representative of the Christian Legal Centre.

Pavel Stroilov has informed the father that he has the right to remove his son from the hospital. Nevertheless, police are there now to stop him. Friends are live-streaming the tense scene at Alder Hey Children’s Hospital in Liverpool.

An hour ago, Tom Evans filmed himself in his son’s room, saying, “So anyone joining in, I’m live in the baby’s room. There he is. Look at him. There he is. I’m here now with Alfie James.”

“There’s his stats,” he continued, filming the machines. “There’s his numbers. Look what I have in front of me,” he said and filmed the lawyer’s letter. “I have a documentation saying that I have the right to take my son out of …  this hospital.”

Evans said that he had removed duty of care from the hospital and given it to an air ambulance company.

“This is my son. Look at my healthy, healthy young boy who’s undiagnosed and is certainly not dying.”

“There’s the ventilator. We have all the equipment.”

Interrupted by hospital staff, Evans invited supporters to gather at the hospital for a protest.  Calling themselves “Alfie’s Army,” the family’s fans number almost 130,000 fans on Facebook alone.

“Look what the world’s coming to,” said Evans.

Behind the father, a young woman wiped away tears.

“Here we sit, eagerly waiting, for them to release our boy legally,” said Evans. “I’m shaking like a leaf. … They have phoned the police over a child.”

“Look how innocent the boy is,” he said, filming Alfie again. “He lies there eagerly waiting for his trip home. How can [it] come to this?”

You have asked me to clarify whether it would be legal for you to remove your son Alfie from Alder Hey Hospital without the Hospital’s consent. In Alfie’s situation, that would only be practical with the support of a team of medical professionals with the necessary life support equipment.

Subject to that, I can confirm that such a removal would be lawful under English law.

The effect of the declaratory orders made by Mr Justice Hayden in the High Court is to make it lawful for Alder Hey to withdraw his artificial ventilation treatment, and to protect Alder Hey and its staff from legal liability for that step. It is not the intention or effect of the order to circumvent Alfie’s personal liberty or your parental rights. It remains lawful for an alternative team of medical professionals, with your parental consent, to provide such medical treatment to Alfie as they professionally deem to be appropriate.

As you know, today Mr Justice Hayden made a further order scheduling the withdrawal of ventilation from Alfie for 12 noon this Friday 13 April. The legal position may arguably become more complicated if someone within the High Court’s jurisdiction continues to provide ventilation after that point. However, there is no doubt that, until that point in time, it remains entirely lawful to provide ventilation to Alfie; and that can be done by a medical service provider of your choice.

For these reasons, as a matter of law it is your right to come to Alder Hey Hospital with a team of medical professionals with their own life-support equipment, and move Alfie to such other place as you consider is best for him. You do not need any permission from Alder Hey Hospital or the Court to do so.

Hope this clarifies the matter.