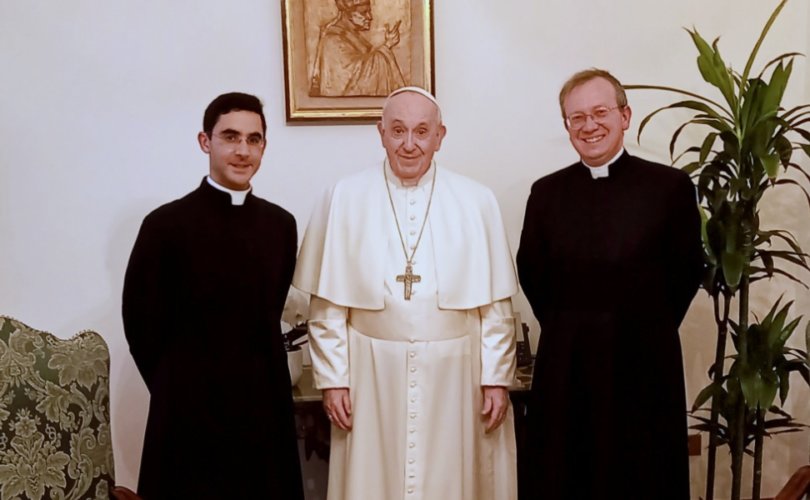 VATICAN CITY (LifeSiteNews) — Pope Francis confirmed in writing that the Priestly Fraternity of St. Peter is “not affected” by the “general provision” restricting the Traditional Latin Mass, as contained in Traditionis Custodes, after he met with some of its superiors.

In a press release February 21, the Priestly Fraternity of St. Peter (FSSP) said the Pope gave a private audience to two members of the Fraternity on February 4.

Fr. Benoît Paul-Joseph, the superior of the District of France, and Fr. Vincent Ribeton, rector of the FSSP’s European seminary in Wigratzbad, were received by the Pope in Rome “for nearly an hour.”

Describing the audience as “cordial,” the two priests “recalled the origins of the Fraternity in 1988,” upon which Pope Francis “expressed that he was very impressed by the approach taken by its founders, their desire to remain faithful to the Roman Pontiff and their trust in the Church.”

Declaring that the FSSP’s gesture should be “preserved, protected and encouraged,” Francis reportedly “made it clear” that the FSSP and institutes similarly devoted to the traditional Mass “are not affected by the general provisions of the Motu Proprio Traditionis Custodes, since the use of the ancient liturgical books was at the origin of their existence and is provided for in their constitutions.”

While no explicit mention was made of institutes and groups such as the Institute of Christ the King Sovereign Priest (ICKSP) or the Institute of the Good Shepherd (IBP), they would appear to be covered by the communique’s mention of “institutes such as the Fraternity of St. Peter” being exempt from the Papal restrictions on the Mass.

The Holy Father Francis, grants to each and every member of the Society of Apostolic Life ‘Fraternity of Saint Peter’, founded on July 18, 1988 and declared of “Pontifical Right” by the Holy See, the faculty to celebrate the sacrifice of the Mass, and to carry out the sacraments and other sacred rites, as well as to fulfill the Divine Office, according to the typical editions of the liturgical books, namely the Missal, the Ritual, the Pontifical and the Roman Breviary, in force in the year 1962.

The decree added that FSSP members could exercise their constitutional right to offer the traditional liturgy “in their own churches or oratories,” but elsewhere they would have to seek “the consent of the Ordinary of the place, except for the celebration of private Masses.”

Pope Francis nevertheless added afterward that “without prejudice to what has been said above … the provisions of the motu proprio Traditionis Custodes be taken into account as well.” He did not clarify how this is to be implemented in practice.

Nor was it clarified how the Pope’s confusing statement in Traditionis Custodes (TC) — “The liturgical books promulgated by Saint Paul VI and Saint John Paul II, in conformity with the decrees of Vatican Council II, are the unique expression of the lex orandi of the Roman Rite” — was to be understood in light of his personal support of the FSSP’s use of the liturgical books of 1962.

One possibility of the Pope’s reference is that priests ordained for the FSSP after July 16, 2021, under the provisions of Traditionis Custodes, might technically have to apply to the Vatican for confirmation of the already granted permission to celebrate the traditional Mass. Such details have yet to be clarified.

Starting February 2, the FSSP had been holding a novena to Our Lady of Lourdes in its churches worldwide, culminating with a solemn consecration of the Fraternity to the Immaculate Heart of Mary on February 11, the day on which Pope Francis signed the decree. The act of consecration invoked the protection of Our Lady to “be ever upon our Fraternity, so that we may faithfully proclaim the Holy Gospel and bring the Sacraments to ever more souls.”

In light of the recent announcement, the FSSP urged “all the faithful who feel close to them as a spiritual family to attend or join them in prayer at the Mass tomorrow.”

Under TC, the FSSP, along with other former Ecclesia Dei groups such as the ICKSP and IBP, fall under the purview of the Congregation for Divine Worship (CDW) and the Congregation for Institutes of Consecrated Life and Societies for Apostolic Life, as Francis writes that it will be up to these curial bodies to “exercise the authority of the Holy See with respect to the observance of these provisions.”

After Traditionis Custodes was released in 2021, the FSSP responded by expressing how it was “surprise[d]” and “deeply saddened” by the document, stating that “the Fraternity in no way recognizes itself in the criticisms made” by Francis against the Latin Mass.

While Pope Francis confirmed the FSSP remains largely free from his move against the Latin Mass, the FSSP’s constitutions were already officially approved by the Holy See in 2003. They stipulate that one of the key aims of the Fraternity is to achieve the “sanctification of priests” through the “faithful observance of the ‘liturgical and disciplinary traditions’ according to the dispositions of the Motu proprio Ecclesia Dei of July 2, 1988, which is at the origin of its foundation.”

Ecclesia Dei called for “a wide and generous application of the directives already issued some time ago by the Apostolic See for the use of the Roman Missal according to the typical edition of 1962.”