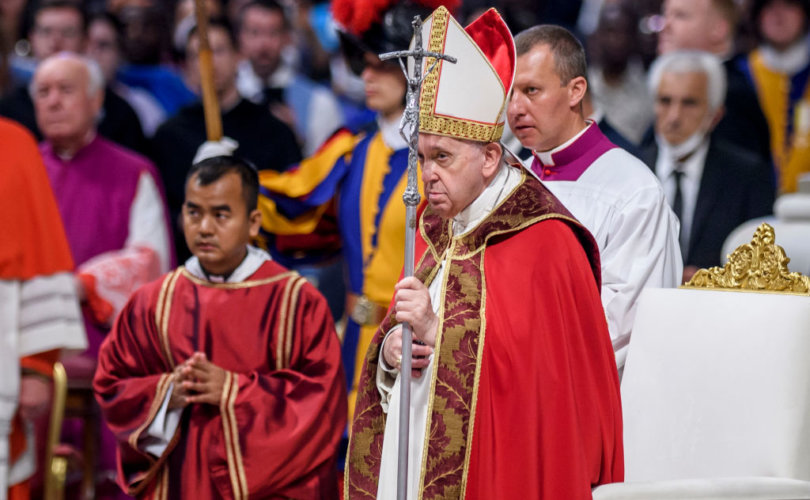 Pope Francis leads the Mass for the Solemnity of Saints Peter and Paul at St. Peter's Basilica on June 29, 2022, Vatican CityPhoto by Antonio Masiello/Getty Images

VATICAN CITY (LifeSiteNews) – Pope Francis has released a new apostolic letter on the liturgy, reaffirming his restrictions on the Traditional Latin Mass while promoting the reformed liturgy as “the unique expression of the lex orandi of the Roman Rite.”

According to Pope Francis, Desiderio desideravi, published Wednesday, follows his July 2021 motu proprio Traditionis Custodes, which took aim at the celebration of the sacraments prior to the reforms initiated by the Second Vatican Council. The letter contains his “reflections on the liturgy,” inviting “the whole Church to rediscover, to safeguard, and to live the truth and power of the Christian celebration.”

Vatican News, the media arm of the Holy See, explained that the new papal letter is “not a new instruction or a directive with specific norms, but rather a meditation on understanding the beauty of liturgical celebration and its role in evangelization.”

Writing in the newly published 15-page apostolic letter, the Pope laid out further context for his earlier motu proprio restricting the celebration of the traditional liturgy of the Church, explaining his position that the apparent “tensions … around the [traditional] celebration” are not merely “simple divergence between different tastes concerning a particular ritual form,” but rather that they are “problematic.”

“I want the beauty of the Christian celebration and its necessary consequences for the life of the Church not to be spoiled by a superficial and foreshortened understanding of its value or, worse yet, by its being exploited in service of some ideological vision, no matter what the hue,” Francis wrote, highlighting the division of opinions on the celebration of the sacraments.

“Let us abandon our polemics to listen together to what the Spirit is saying to the Church,” he said.

The Pope used his letter to again stress, as an underpinning argument for his punishing restrictions on the traditional sacraments, the notion that adherents to tradition reject the Second Vatican Council as part of their devotion to the usus antiquior of the Mass.

“I do not see how it is possible to say that one recognizes the validity of the [Second Vatican] Council – though it amazes me that a Catholic might presume to do so – and at the same time not accept the liturgical reform born out of Sacrosanctum Concilium,” Francis wrote.

The constitution, he said, promotes as foundational “full, conscious, active, and fruitful celebration” of the liturgy.

“The non-acceptance of the liturgical reform, as also a superficial understanding of it, distracts us from the obligation of finding responses to the question that I come back to repeating: how can we grow in our capacity to live in full the liturgical action? How do we continue to let ourselves be amazed at what happens in the celebration under our very eyes?”

Accordingly, the Pope stated that it is his “duty to affirm that ‘The liturgical books promulgated by Saint Paul VI and Saint John Paul II, in conformity with the decrees of Vatican Council II, are the unique expression of the lex orandi of the Roman Rite,’” reiterating his decree from the document Traditionis custodes.

Francis emphasized the work of both Popes Paul VI and John Paul II as guaranteeing “the fidelity of the reform of the Council.”

“For this reason I wrote Traditionis custodes, so that the Church may lift up, in the variety of so many languages, one and the same prayer capable of expressing her unity.”

“As I have already written, I intend that this unity be re-established in the whole Church of the Roman Rite,” Francis stated.

In conclusion, the Pope urged the faithful to “abandon our polemics to listen together to what the Spirit is saying to the Church. Let us safeguard our communion. Let us continue to be astonished at the beauty of the Liturgy.”

“The Paschal Mystery has been given to us. Let us allow ourselves to be embraced by the desire that the Lord continues to have to eat His Passover with us. All this under the gaze of Mary, Mother of the Church,” Francis said.

Reacting to the document on Twitter, Catholic author and catechist Deacon Nick Donnelly wrote that the Pope reflections constitute “chilling words for those who love the Mass of the Ages.”

Pope Bergoglio’s ‘Desiderio Desideravi’ contains chilling words for those who love the Mass of the Ages.

He makes his intention clear — Bergoglio intends to end the traditional Latin Mass by enforcing the Novus Ordo on the entire Roman Rite under the pretense of unity pic.twitter.com/HOJ6ENjRUz

“Bergoglio intends to end the traditional Latin Mass by enforcing the Novus Ordo on the entire Roman Rite under the pretense of unity,” the cleric warned, later arguing that the Pope’s exhortation to “abandon our polemics to listen together to what the Spirit is saying to the Church” is a veiled way of saying “we must abandon Tradition and submit to his [Francis’] will.”

Traditional Catholic blog Rorate Caeli told its Twitter following that the new apostolic letter shows the Pope to have thrown “his hat on the ‘hermeneutic of rupture’ view on the liturgy.”

“Ratzinger’s life work on the liturgy and this as far apart as day and night,” the group stated.

Vatican reporter Bree Dail wrote that, “according to several sources, that Pope Francis ‘no longer believes in ongoing debate’ over ‘hermeneutic of continuity’, but ‘made his personal position clear, breaking from his predecessor, Benedict XVI’.”

It seems clear, according to several sources, that Pope Francis “no longer believes in ongoing debate” over “hermeneutic of continuity”, but “made his personal position clear, breaking from his predecessor, Benedict XVI”.

This, however, “is not a binding position or declaration”

“This, however, ‘is not a binding position or declaration,’” she wrote.

Simply put, @Pontifex, because the Con𝘀ilium was not the Con𝗰ilium. Ugh.
You don’t know the reasons why I & so many others love the traditional Roman Rite; worse, you can’t even care to be interested. To you, we’re all just psychologically damaged “rigid restorationists”… 😞 pic.twitter.com/adcTtaCgI1

Meanwhile, U.S. House Speaker Nancy Pelosi was reportedly seen receiving Holy Communion at a Mass presided over by Pope Francis on Wednesday, despite an order from her local ordinary, Archbishop Salvatore Cordileone, expressly banning her from presenting for the Eucharist until she publicly recants of her ardently pro-abortion position as a Catholic politician.

Writing on Twitter Deacon Nick Donnelly said that the Pope has “facilitated sacrilege against the Blessed Sacrament by allowing abortionist Nancy Pelosi to receive Holy Communion,” arguing that “[t]his vile desecration is worse than his veneration of Pachamama in St. Peter’s.”

On the Feast of St Peter and St Paul, above the tomb of St. Peter.

This vile desecration is worse than his veneration of Pachamama in St. Peter’s. pic.twitter.com/xuog7Ih8dm

Pelosi first snubbed the prelate last month, receiving Communion at a Washington, D.C. parish just days after she had been forbidden from doing so.