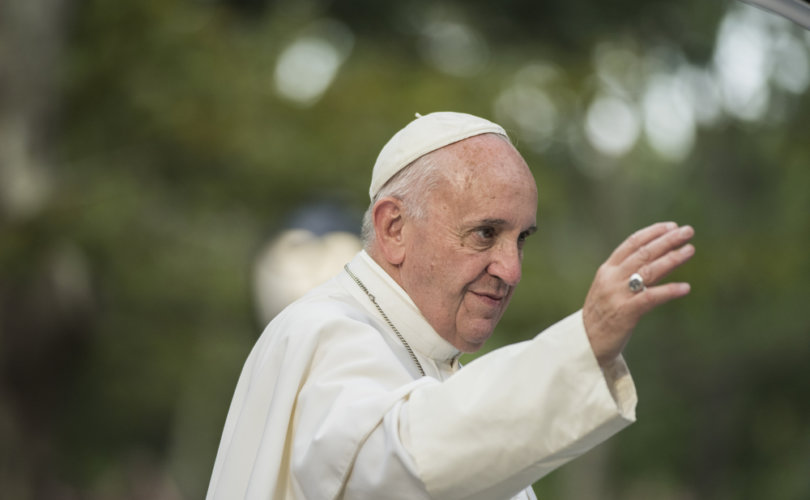 November 1, 2016 (LifeSiteNews) – The Catholic Church’s teaching on the ordination of women to the priesthood is clear and final, Pope Francis told reporters today on his flight home from Sweden.

The pope was asked whether it was “realistic to think that there might be women priests also in the Catholic Church in the next few decades.”

“On the ordination of women in the Catholic Church, the last word is clear,” Pope Francis stated. “It was given by St. John Paul II and this remains.”

The pope has said previously of women’s ordination to the priesthood that it cannot be done and has also invoked his predecessor, however today’s comments to appear for the first time to have finality. His view has been open to some question because of his clear willingness to consider the question of women deacons.

Today’s quotes are significant as well for being made on his return from a controversial visit to Sweden, where the pope commemorated the 500th anniversary of the Protestant Reformation and where he’d also been welcomed by Lutheran Archbishop Antje Jackelen of Uppsala, the Church of Sweden’s female primate, the latter which the Swedish reporter had brought up in the question.

“But really forever?” the reporter asked the pope. “Never?”

Pope Francis replied, “If we read carefully the declaration made by St. John Paul II, it goes in that direction.”

The pontiff was referencing Pope St. John Paul II’s 1994 apostolic letter Ordinatio Sacerdotalis, which states “the Church has no authority whatsoever to confer priestly ordination on women and that this judgment is to be definitively held by all the Church's faithful.”

Pope John Paul II’s teaching reflected the Catechism (CCC 1577), in that only a baptized man can validly receive the sacrament of Holy Orders, and it was subsequently confirmed as infallible by the Congregation for the Doctrine of the Faith (CDF).

Several of Pope Francis’ past actions have given women’s ordination advocates potential hope he would somehow lift the ban on women priests, including appointing a Special Commission for the Study of the Diaconate of Women earlier this year, as well as opening the rite of washing feet on Holy Thursday to women, personally doing so himself several times beginning early in his papacy.

In the 40-minute press conference today that also touched on issues such as refugees, political and social tensions in Venezuela and European secularization, the pope went on to praise women and the prominence of the Blessed Mother in the Church.

“But women can do many other things better than men,” Pope Francis said, confirming the Church’s separate dimensions, Petrine, and Marian, which he referred to as “the feminine dimension of the Church.”

Pope Francis then reemphasized Mary’s significance for the reporters present.

“People ask me,” he said, “who is more important in the theology or in the spirituality of the Church – the apostles or Mary, on the day of Pentecost?”

“It is Mary!” The Holy Father stated, adding further, “More!”