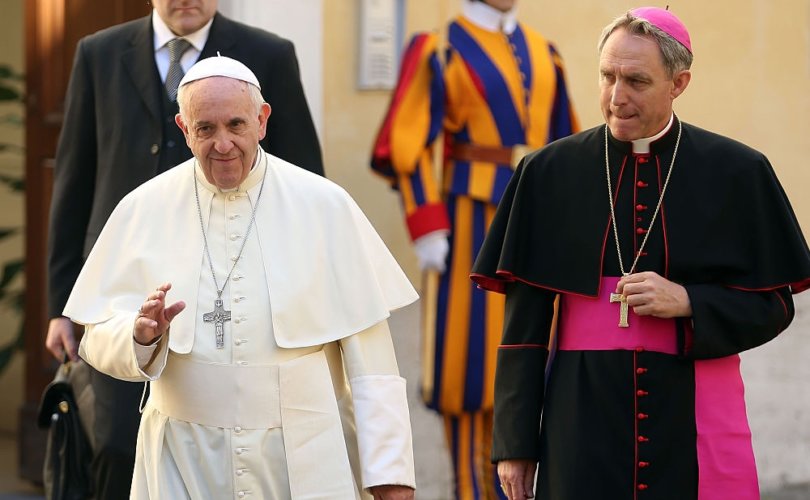 Pope Francis and Prefect of the Pontifical House Georg Ganswein (R) arrive at the Paul VI Hall for a private audience with President of Cuba Raul Castro on May 10, 2015 in Vatican City. Franco Origlia/Getty Images

ROME, February 5, 2020 (LifeSiteNews) – Pope Benedict’s secretary, Archbishop Georg Gänswein, has been put on administrative leave indefinitely by Pope Francis, according to Catholic newspaper Die Tagespost. Gänswein is reportedly being released from his duties as Prefect of the Papal Household in order to spend more time with Pope Emeritus Benedict XVI.

Gänswein has been the private secretary of Cardinal Joseph Ratzinger since 2003. He remained at his side after Ratzinger’s election to the papacy. Only a few months before Benedict resigned in 2013, he made Gänswein the Prefect of the Papal Household, as well as an archbishop.

Since then, the German prelate has spent part of his day with the Pope emeritus, while fulfilling his duties as Prefect of the Papal Household during the remainder of his day.

Die Tagespost speculates that the administrative leave is related to the rollout of the book From the Depths of Our Hearts on clerical celibacy by Cardinal Robert Sarah, to which Benedict XVI contributed.

French newspaper Le Figaro had first reported on the book on January 12. Immediately, “a storm of criticism ensued against the cardinal and the Pope emeritus, portraying both of them as at odds with Pope Francis,” as Edward Pentin wrote for the National Catholic Register.

Sarah, the Prefect of the Congregation for Divine Worship and the Discipline of the Sacraments, had been working with French publisher Fayard for years. The cover of the original edition of the book on celibacy portrayed Benedict as a co-author, including a photo of the former Pope the same size as that of Sarah.

Archbishop Gänswein said on January 14 that he had called Cardinal Sarah “at Benedict’s request, to ask the book’s publisher to remove the signature of the Pope emeritus from the introduction and conclusion, because he had not co-authored them.”

Following the first backlash, Sarah said in a statement, “The polemic which has aimed to tarnish me for several hours by implying that Benedict was not informed of the appearance of the book ‘From the Depths of Our Hearts’ is completely despicable.”

While the first edition of the book, for reasons of time, was still printed portraying the Pope emeritus as a co-author, future editions were announced as only referring to him as a contributor.

The publisher of the English version, Ignatius Press, maintains that Benedict is a co-author. They argued: “Given that, according to Benedict XVI’s correspondence and Cardinal Sarah’s statement, the two men collaborated on this book for several months, that none of the essays have appeared elsewhere, and that a joint work as defined by the Chicago Manual of Style is ‘a work prepared by two or more authors with the intention that their contribution be merged into inseparable or interdependent parts of a unitary whole’, Ignatius Press considers this a coauthored publication.”

Archbishop Gänswein later said the introduction and the conclusion were not written by both, but only by the cardinal, even though the French publisher said otherwise.

Also on January 14, Vatican-based journalist Antonio Socci had claimed that Pope Francis was “furious” over Benedict’s contribution to the book on celibacy, demanding he retract his name from the work.

Socci speculated, “In fact, that very authoritative pronouncement of Benedict XVI prevents [Pope Francis] from taking a pickaxe to ecclesiastical celibacy as he had planned to do in the next post-synodal exhortation.” The exhortation is expected to be published this month. There have been conflicting reports as to whether or not celibacy will be made optional for certain men wanting to be a priest.

Implicating Gänswein in the story, Socci said, “Thus, [Pope Francis] personally called Archbishop Gänswein, the secretary of Benedict XVI as well as the prefect of Bergoglio’s pontifical household, and – furious – ordered him to remove the name of Benedict XVI from the cover of the book …”

On January 17, after having talked to the Prefect of the Papal Household, Die Tagespost reported that both Benedict and Gänswein received the French edition of the book for the first time the day after Le Figaro published the first story about it.

Die Tagespost wrote, “Then, according to Gänswein, he approached [editorial director of the Dicastery for Communication] Tornielli and agreed on the following language, which was then adopted by all Vatican media. First: Benedict XVI did not write a “Book of Four Hands” together with Cardinal Robert Sarah. Secondly: The Pope emeritus has neither seen nor approved the front page of the book allegedly written by four hands. Thirdly: Benedict XVI wrote a contribution on the priesthood months ago, and Cardinal Sarah asked to be able to read it. The Pope emeritus finally left this article to Sarah, knowing that he was writing a book on the priesthood. Fourthly: It is obvious that (in the presentation of the book) there took place an editorial and media operation with which Benedict XVI has nothing to do and from which he distances himself completely.”

Gänswein claimed there was a misunderstanding between Pope Emeritus Benedict XVI and Cardinal Sarah, but no conspiracy by any of the parties involved.

Cardinal Sarah had worked closely together with Nicolas Diat, the book’s editor. According to Vatican-based journalist Edward Pentin, Diat confirmed Sarah’s summary of events, most notably stressing that the cardinal showed Benedict in person a draft copy of the cover during a private audience.

Pentin quoted Diat as saying, “Cardinal Sarah sent a confidential letter [to Benedict] on November 19 with the full text. The proofs were complete: introduction, the two texts, and the conclusion. Then, on December 3, he showed the draft cover during an audience with Benedict XVI.”

Gänswein later denied that the Pope emeritus had seen the proofs of the book.

In the wake of the controversy surrounding the genesis of the book on celibacy, Archbishop Carlo Maria Viganò had also released a testimony. In it, he denounced Gänswein for what he calls his “abusive and systematic control” of the Pope emeritus.

As LifeSiteNews reported, “Archbishop Viganò asserts that ‘Gänswein habitually filtered information, arrogating to himself the right to judge how opportune or not it was to send it to the Holy Father.’”

UPDATE 9:05AM ET: Edward Pentin, Rome correspondent for the National Catholic Register, reports that a Vatican spokesperson has denied that Archbishop Gänswein was put on leave. The spokesman told him, “We have no information in that sense.” Rather, his absence “during certain audiences in recent weeks” is “due to ordinary redistribution of the various commitments and duties” of Gänswein working both as prefect of the Papal Household and personal secretary of Pope emeritus Benedict XVI.

LifeSite has confirmed that Gänswein last attended the pope's Wednesday general audience on January 15, 2020. Since then, he has been replaced by another prelate. As the Prefect of the Papal Household, he is responsible for organizing all audiences with the Pope, and is usually seen sitting next to Pope Francis during his Wednesday audiences.

Ingo Brüggenjürgen, editor in chief of Domradio, the news outlet affiliated with the archdiocese of Cologne, said in an interview that according to his sources, the original report is correct. He added, “The decision was already looming. There were already similar reports immediately after the struggle over the book by Cardinal Sarah and Pope Benedict.”

LifeSite has reached out to Archbishop Gänswein for comment.