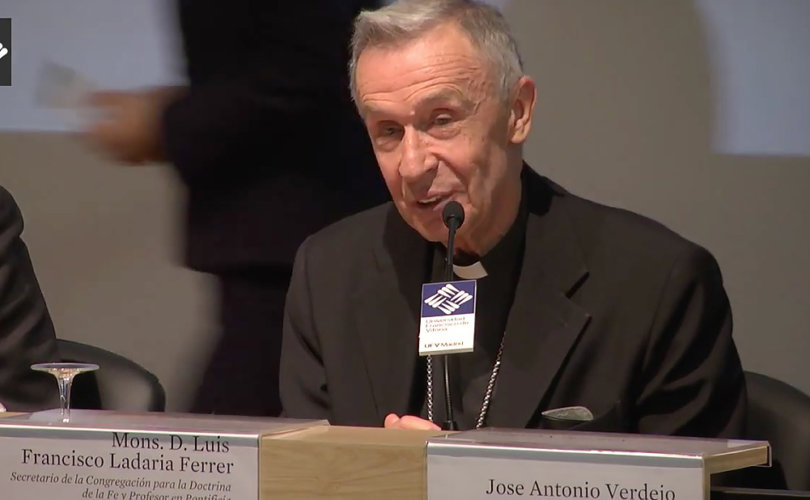 VATICAN, July 1, 2017 (LifeSiteNews) – Pope Francis has named a Jesuit, Archbishop Luis Ladaria Ferrer, to replace Cardinal Gerhard Müller as Prefect for the Congregation of the Doctrine of the Faith (CDF).

Ladaria Ferrer, 73, was previously Secretary of the CDF.

The appointment is coming at the end of Müller's five-year term, however prefects have generally had their terms extended until normal retirement age at 75.

Cardinal Joseph Ratzinger served as prefect from 1981-2005, leaving the post at age 78 when he was elected Pope Benedict XVI.

The head of the Congregation for the Doctrine of the Faith was at one time second in power only to the Pope.

Cardinal Muller has been steadfast in his opposition to the liberal interpretation of Amoris Laetitia favored by Pope Francis.

In terms of vocal conservatives in the hierarchy of the Vatican only Cardinal Robert Sarah remains. Cardinal Burke was removed by Pope Francis and demoted to patron of the Order of Malta. Australian Cardinal George Pell, as reported this week, is now off to his home country to defend himself against media-hyped charges of sexual abuse.

Cardinal Muller, according to sources, seems set to take over as the Patron of the Order of the Holy Sepulchre of Jerusalem, replacing Cardinal Edwin O’Brien who at 78 is three years past retirement age.