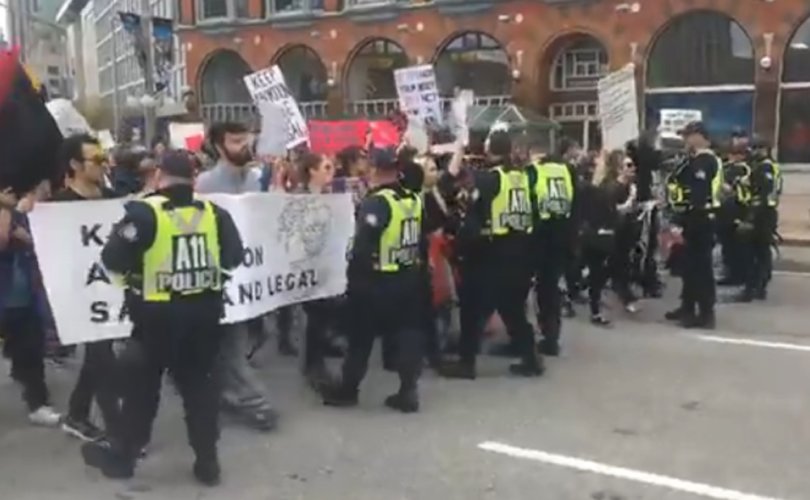 OTTAWA, May 10, 2018 (LifeSiteNews) – A group of pro-abortion activists gathered in a spot along the route of the March for Life, forcing the annual pro-life event to change its route to avoid the angry crowd, some of whom were wearing masks and many of whom were screaming obscenities.

Police officers had to stand in front of the pro-abortion crowd, on the other side of which stood the front of the March for Life procession.

At the front of the crowd was a banner proclaiming, “End the March for Life,” behind which stood several dozen people holding a variety of pro-abortion signs, as seen in video of the incident recorded by LifeSiteNews.

The video shows two woman with megaphones leading the crowd in chants such as “one, two, three, four, abortion is worth fighting for” and “bodily autonomy, not your misogyny.” Later the abortion supporters screamed, “hey hey, ho ho, this sexist s*** has got to go” along with the classic abortion-chant “keep your rosaries off my ovaries.” Several minutes later they screamed in unison, “pro-choice, we rejoice!”

A few of the protesters, including one of the chant leaders, can be seen wearing masks similar to those popularized by the radical left-wing Antifa movement.

Matt Cicero, an area activist who participated in the pro-abortion march, took credit for successfully “stopping” the March for Life and getting it to “turn around.” He also claimed more than 150 people took part in the counter-protest, which is apparently disrupting Ottawa traffic.

However, sources on the ground tell LifeSiteNews that the march has been able to successfully resume after altering the route, with police helping maintain peace and get the march underway again.