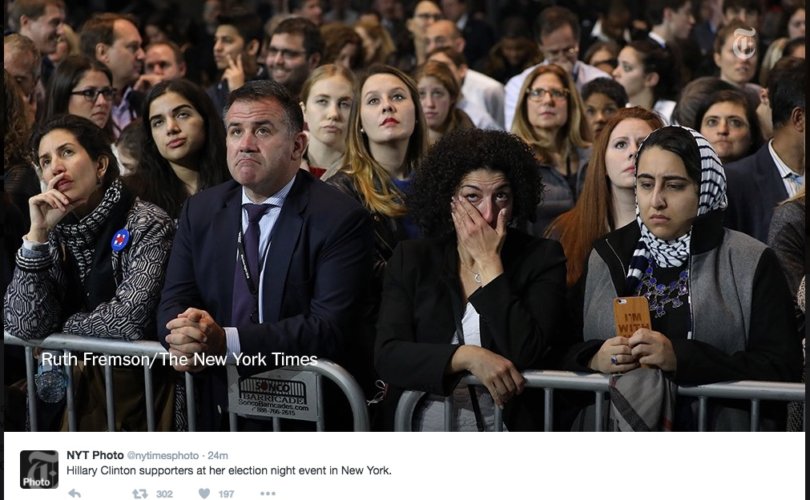 November 8, 2016 (LifeSiteNews) — As Republican candidate Donald Trump continues to win state after state, Democrats are panicking as a Trump victory appears to be increasingly likely. The New York Times is predicting a Trump win, now giving him a 95 percent chance for the presidency, although the night is not yet over.

Hillary Clinton has already suggested the possibility of defeat, tweeting: “This team has so much to be proud of. Whatever happens tonight, thank you for everything.”

This team has so much to be proud of. Whatever happens tonight, thank you for everything. pic.twitter.com/x13iWOzILL

Word has spread that the Clinton headquarters has reportedly gone offline.

The news feed has been pulled at Clinton headquarters. Hillary has thanked staff for good work.

Fox news is reporting “shock” and “furrowed brows” at Clinton headquarters. One Fox News commentator stated that the Clinton party looks “like a Coldplay concert.”

Pundits on the major network coverage have also commented on the solemn mood, even tears, at Clinton's headquarters.

CNN's Brianna Keilar described the gloomy scene where she is at Hillary Clinton's headquarters. According to Keilar, the festive, relaxed atmosphere of earlier in the day has given way to one of despair. People are standing around “stony-faced,” she told Wolf Blitzer.

“Some of them have been crying.”

“There are people who are just in shock,” she added, saying that some people have their “mouths opened.”

“They are just stunned.”

Leading conservative pundits were also shocked by the voting results.

Yup. I got it totally wrong. Obviously. https://t.co/8cQdtqFF9E

Left-leaning media and various left-leaning establishments also appear to be in shock at the Trump takeover that they see unfolding before them.

The Daily Beast began one article this way: “Democrats were stunned Tuesday night as a series of unexpected wins positioned Donald Trump to be the next likely president.”

Pro-abortion activists are sensing the game is almost over and not in their favor. Some are even telling pregnant mothers looking to kill their preborn children via abortion that they had better “get on that ASAP” with a Trump presidency looking possible.

All you #abortion needers better get on that ASAP bc @realDonaldTrump is gonna take away your rights soon. #calltheclinic