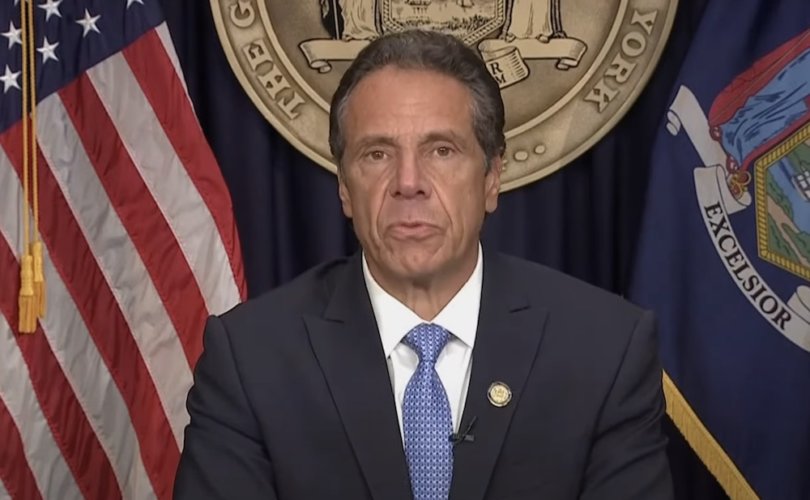 NEW YORK (LifeSiteNews) – In a dramatic “fall from grace,” New York’s Democrat Gov. Andrew Cuomo announced his resignation Wednesday, describing it as an act of love as he faces accusations of numerous counts of sexual harassment and violations of state law.

The report accused him of “engaging in unwelcome and nonconsensual touching, as well as making numerous offensive comments of a suggestive and sexual nature that created a hostile work environment for women.”

Cuomo, who since the publication of that report now stands accused of sexual harassment by two more women for a total of thirteen women, has served as governor since January 2011, during which he has been accused of creating a culture of “fear and intimidation.”

Following remarks made by his lawyers alleging “serious issues and flaws” with the report, Cuomo addressed the allegations against him, saying “I take full responsibility for my actions,” but describing the report as “false.”

“This is not to say that there are not 11 women I truly offended,” continued Cuomo. “There are. And for that, I deeply, deeply apologize.”

“I have done it all my life. It’s who I have been since I can remember. In my mind, I have never crossed the line with anyone, but I didn’t realize the extent to which the line has been redrawn,” Cuomo said. “There are generational and cultural shifts that I just didn’t fully appreciate – and I should have. No excuses.”

As a result, Cuomo announced his resignation effective in 14 days.

He described the current times as “one of the most challenging times for government in a generation.”

As such, government needs to “function” and to “perform,” stated Cuomo, adding that it is “a matter of life and death – government operation – and wasting energy on distractions the last thing that State government should be doing, and I cannot be the cause of that.”

“I love New York and I love you,” said Cuomo, “and everything I have ever done has been motivated by that love, and I would never want to be unhelpful in any way, and I think that given the circumstances, the best way I can help now is if I step aside.”

As the fallout over the sexual harassment allegations remains as yet undecided, with prosecutors moving against him in five state counties, Cuomo will now be replaced by New York Lieutenant Governor Kathy Hochul, who served alongside Cuomo since 2014.

A Catholic with a checkered history

Cuomo, a self-professed Roman Catholic, has a record of supporting numerous policies and activities which violate Catholic teaching. Referencing his support for same-sex “marriage” and abortion, the New York Times described him in 2011 as being “sharply at odds with church teaching.”

More recently, during last year’s COVID-19 outbreak, Cuomo moved to place severe restrictions on places of worship, including Catholic churches, which at one point had forced churches and synagogues to have as few as 10 people inside, no matter the size of the building, whilst “essential businesses” were allowed to operate as normal, with no limit on the capacity.

When the Supreme Court ruled against the restrictions as unconstitutional, Cuomo termed it “irrelevant” and a mere “statement.”

He was accused by House Republican Leader, Kevin McCarthy of being “power-hungry” and having “used the pandemic as an excuse to target people of faith with radical restrictions.”

Cuomo had enjoyed a media narrative presenting him as a model leader, which Cuomo took advantage of to release a book on “Leadership Lessons From the COVID-19 Pandemic,” touting his self-professed “clear communication, compassion for others, and a commitment to truth-telling.”

However, his COVID-19 care home policy has also made headlines in recent months, as AG James reported in January that he had undercounted COVID-19 deaths in nursing homes by as much as half. The report found that while state health officials only publicly reported deaths that took place inside nursing homes (as opposed to patients who got sick inside but didn’t die until being transferred to a hospital), they collected data on deaths outside homes as well, indicating a “significantly higher number of resident COVID-19 deaths can be identified than is reflected” in the public tally.

Cuomo initially tried to blame nursing home deaths on the Trump administration by claiming that a federal Centers for Disease Control (CDC) guidance forced him to put the infected back in nursing homes.

However, shortly after the report was released, his former top-aide Melissa DeRosa privately revealed to fellow Democrats that the governor had hidden the damning data in order to avoid a Trump-instigated investigation.