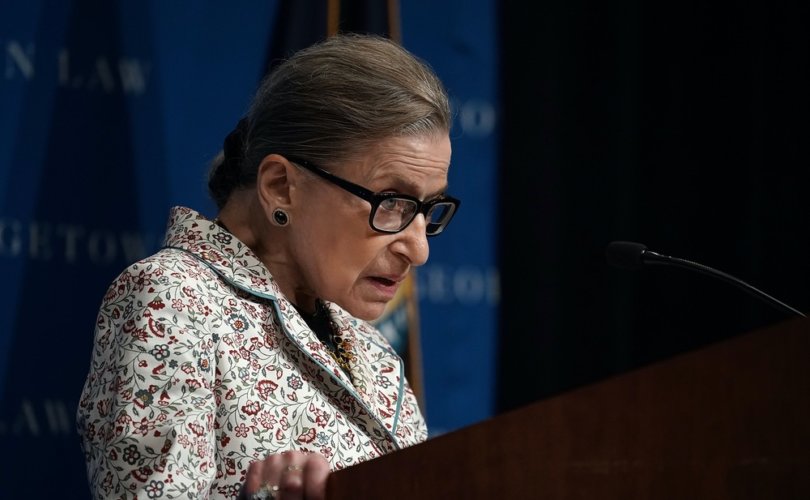 “May God have mercy on her soul,” said John-Henry Westen, Co-Founder and Editor-in-Chief of LifeSiteNews. “Justice Ginsburg was known for her friendship with the late Justice Antonin Scalia, a pro-life Catholic who attended the Traditional Latin Mass. We hope that his faith had an impact on her later in her life, and that she repented of her pro-abortion activism at the end.”

She died of “complications of metastatic pancreas cancer,” according to the Supreme Court.

Among other decisions, Ginsburg had voted to strike down a law banning partial-birth abortions in Nebraska. “A state regulation that ‘has the purpose or effect of placing a substantial obstacle in the path of a woman seeking an abortion of a nonviable fetus’ violates the Constitution,” she argued.

Ginsburg was also in favor of so-called homosexual “marriage.” Only a few months after the Supreme Court struck down the Defense of Marriage Act in 2013, Ginsburg became the first Supreme Court justice to officiate a homosexual “wedding” ceremony.

“I think it will be one more statement that people who love each other and want to live together should be able to enjoy the blessings and the strife in the marriage relationship,” Ginsburg said afterwards. She subsequently officiated at several other same-sex “weddings,” before imposing homosexual “marriage” on the nation in the 2015 case Obergefell v. Hodges.

Ginsburg had been hospitalized several times this year.

Earlier this month, President Donald Trump had announced the names of 20 new candidates he would consider to fill any openings on the Supreme Court, including three senators: Ted Cruz of Texas, Tom Cotton of Arkansas, and Josh Hawley of Missouri.

Before the 2016 election, Trump had already released two lists with 21 names overall. A social conservative favorite from those lists is Amy Coney Barrett.

It remains to be seen whether Trump, and a Senate with a small Republican majority, will be able to push through any candidate before the November elections.

In May 2019, Senate Majority Leader Mitch McConnell said “we’d fill it” if a Supreme Court seat became vacant before the 2020 election.

According to an NPR report, Ginsburg had told granddaughter Clara Spera, “My most fervent wish is that I will not be replaced until a new president is installed.”

“Justice Ginsburg’s tragic passing makes it clear just how important…the U.S. Supreme Court” is, said Kristan Hawkins, President of Students for Life of America. “President Trump must move quickly to nominate someone committed to protecting life in law, fulfilling his promise to appoint judges who don’t see the Constitution as a fill-in-the-blank document.”