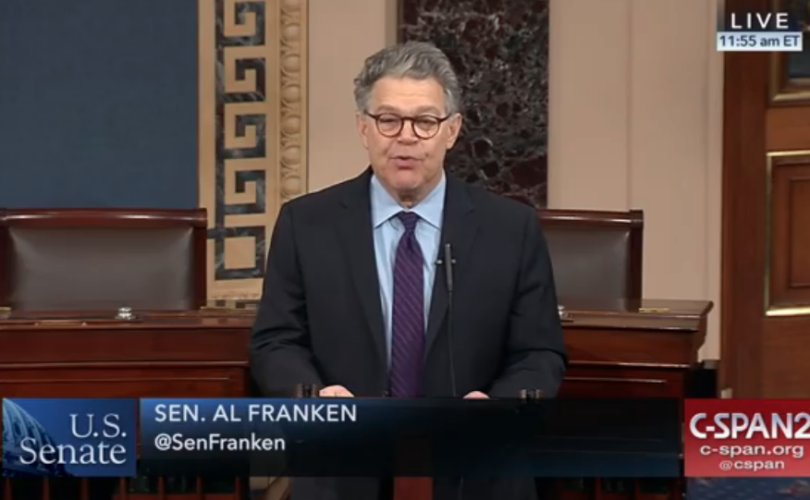 “Some of the allegations against me simply aren’t true,” but some are, Franken said in his resignation speech.

Franken, a longtime supporter of abortion giant Planned Parenthood, first came under scrutiny when a photo surfaced of him groping a radio host while she slept. The radio host, Leeann Tweeden, also said he forcibly kissed her and put his tongue in her mouth.

Another woman said Franken grabbed her buttocks during a 2010 state fair.

Others also came forward accusing Franken of sexual impropriety or groping, bringing the number to at least seven. One woman, a congressional aide in 2006 before Franken was elected to the U.S. Senate, said he tried to forcibly kiss her.

During his resignation speech, Franken said he now realizes how his actions have affected women.

“A couple months ago…we were finally beginning to listen to women about the ways in which men’s actions affect them,” he said.

“Then the conversation turned to me,” he continued. “Over the last few weeks, a number of women have come forward to talk about how they felt my actions had affected them.”

“I was shocked. I was upset,” Franken went on. “But in responding to their claims I also wanted to be respectful of that broader conversation.”

Franken reached for the moral high ground through his speech, maintaining that he respects women. He blasted President Trump and Judge Roy Moore, who is running for Alabama’s open Senate seat and being accused of sexual misconduct.

“An important part of the conversation we’ve been having the last few months” is about how “men abuse their power…to hurt women,” said Franken. But “during my time in the Senate, I have used my power to be a champion of women.”

“I’ve earned a reputation as someone who respects the women I work alongside every day,” Franken claimed. “I know who I really am.”

“I, of all people, am aware that there is some irony” in me resigning while Trump remains in the office, said Franken, referring to a 2005 tape during which the current president vulgarly described grabbing women.

Franken then attacked Moore, saying the judge has the full backing of the Republican party. He urged everyone to “hold this administration accountable,” promising supporters “I am going to be just fine.”

Franken ended his speech talking about how difficult his job as a senator was because of the “long hours and late nights and hard lessons.”

But “I know that the work I’ve been able to do has improved people’s lives,” he insisted.

Minnesota Gov. Mark Dayton, a Democrat, will appoint someone to replace Franken until an election in 2018 for a two-year term. The election for a six-year term for that seat will be in November 2020.

On Wednesday, Senate Minority Leader Sen. Chuck Schumer, D-NY, called on Franken to resign. A total of 13 female and 19 male Democratic senators said he should resign.

On Wednesday, a liberal journalist wrote in The Atlantic that Franken groped her at a Media Matters party celebrating President Obama’s inauguration in 2009.

Franken’s past as a comedian didn’t help him as this scandal unfolded. He previously joked about child rape and said he fantasized about raping a news anchor.

Franken’s resignation makes him “the most prominent lawmaker so far to be felled by the swirling allegations of sexual harassment and misconduct sweeping through the Capitol,” the New York Times reported.

Pro-abortion Rep. John Conyers, Jr. D-MI, resigned on Tuesday. The 88-year-old used an office expense fund to pay $27,000 to a former aide. He faced sexual harassment allegations from her.

“Most of us” have seen Conyers in his underwear, a former employee said. Other women said he propositioned them for sex or sexually harassed them.

Franken spent much of his time in the Senate championing hard-left causes like abortion and the promotion of homosexuality. He unsuccessfully tried to embarrass Focus on the Family in 2011 for using data showing kids do best with a mom and dad.

Franken has aggressively promoted the LGBT cause in recent years.

As LifeSiteNews’ Doug Mainwaring reported earlier this year, Franken has also made disturbing comments about homosexuals being killed that apparently are overlooked now:

In a 1976 interview in the Harvard Crimson, Harvard alum Franken declared, “I just don't like homosexuals. If you ask me, they're all homosexuals in the Pudding.” [Pudding is short for the Hasty Pudding Institute, a Harvard social club which produces theatricals.]  Franken continued, “Hey, I was glad when that Pudding homosexual got killed in Philadelphia.”

The Harvard Crimson’s interviewer noted that Franken’s “smile became so broad it pushed his eyes shut. He couldn't stand it any longer. ‘Put that in, put that in,’ Franken laughed, leaning over the desk. ‘I'd love to see that in The Crimson.’”