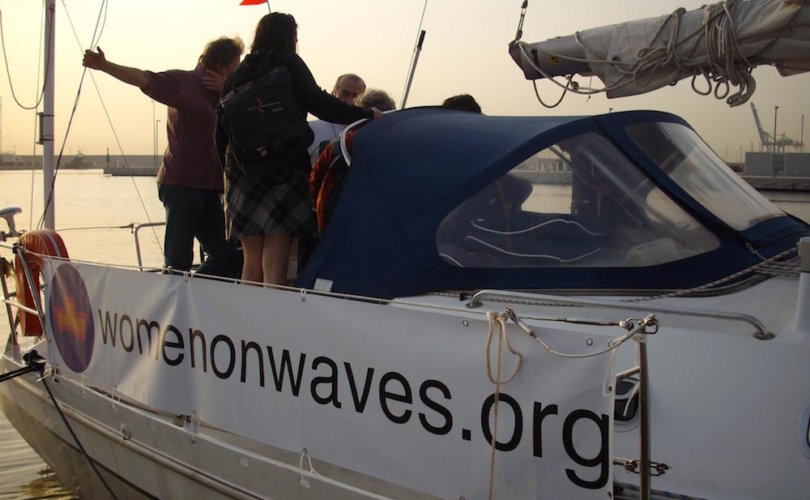 QUETZAL, Guatemala, February 24, 2017 (LifeSiteNews) – The Guatemalan government has detained a vessel sent by a Dutch abortion group, Women on Waves, only a day after it arrived in the country’s largest port.

“We are fine but our project is not fine,” Women on Waves spokeswoman Leticia  Denedich told LifeSiteNews. “Our boat has been detained.” The plan was for the Adelaida to leave port three days from now and return to international waters. There it would provide medical or pharmaceutical abortions on unborn babies of up to 10 weeks gestation.

Guatemalan women were to ferry out to the ship, take the pill or pills, and return to shore in just four hours.

However, Denedich said the Quetzal Port Authority has ordered the Adelaida to stay at her berth and posted a patrol boat a few meters away. “They have not cited any legal authority,” she said. “But it is clear now we will have to go to court.”

According to news reports, the 10 abortion activists from Europe and Brazil are confined to the vessel.

However, the activists have also attracted pro-life demonstrators who disrupted their press conference. One of them, a seminary student from Cuba, Gil Hernandez, told AFP News, “They say they are fighting for life and human rights, but it looks like murder has become a human right.”

However, the Guatemalan government and its president Jimmy Morales clearly intend to protect the life of its unborn children. Guatemala's Constitution protects the life of the unborn from conception, and abortions are illegal. When the life of the mother is in danger, doctors are permitted to intervene under the principle of double effect to save her life.

The armed forces issued a news release Wednesday stating, in part, “The Armed Forces of Guatemala, responsible for the territorial seas of Guatemala, and with instructions from the Commander in Chief of the Armed Forces, in accord with the Political Constitution of the Republic’s protections for the preservation of human life and other… laws in our country will not allow this NGO to carry out these activities.”

The release added that the armed forces were monitoring the “operation of this vessel to ensure it does not commit any crimes and violations of international maritime laws and human rights.”

Rebecca Gomberts, who founded Women on Waves in 1999, said Wednesday from Guatemala that the group had acquired all the necessary approvals to enter Guatemalan waters and the Port of Quetzal.

The Guatemalan Congress voted down a motion Thursday to take action against the boat. It could vote on another motion against Women on Waves today.

Denedich said one of the goals of the expedition was “to raise awareness of Guatemala’s laws against abortion.”

“We have more than done that,” she said.

Marlene Gillette-Ibern of Human Life International told LifeSiteNews, “The authorities in Guatemala can and must stop Women on Waves. … The clear purpose of Women on Waves is to destroy innocent human life in Guatemala.”

Gillette-Ibern added, “The Guatemalan government must act to protect [them].” The Guatemalan Constitution “expressly recognizes that the right to life is a human right.”

The international Society for the Protection of Unborn Children denied Women on Waves’ claim that the medical abortions it planned to provide were safe. SPUC’s website explains the possible side effects of medical or pharmaceutical abortion on the woman.

SPUC also listed who should not take the drug. These include “Women who smoke. those over 35 years of age, women under 18 years of age, those who have asthma, obesity, high blood pressure, fibroids, glaucoma, ulcers, colitis, arthritis, epilepsy, kidney disease, pulmonary and cardio-vascular disorders, and suspected ectopic pregnancy.”

Abortion drugs first “break down the lining of the womb,” then kill the baby and, finally, “expel the baby.”