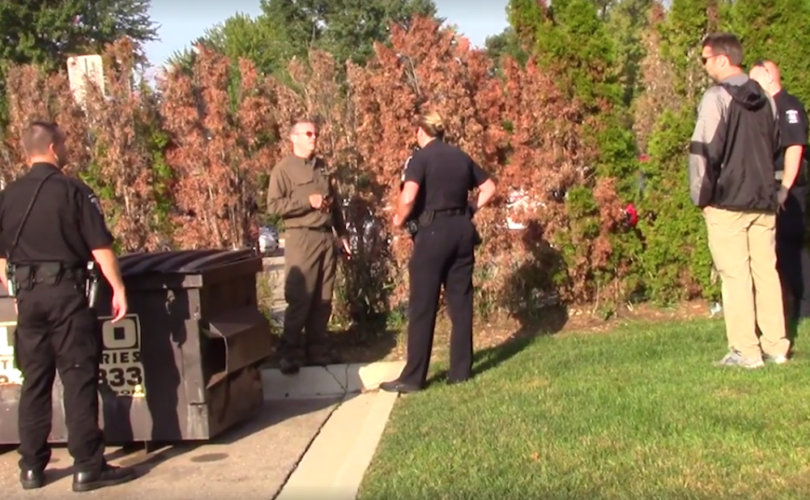 September 15, 2017 (LifeSiteNews) — Ten pro-life activists, including two Catholic priests, were arrested this morning at a Michigan and a Virginia abortion facility while attempting to persuade women not to abort their unborn children.

Monica Migliorino Miller, Will Goodman, Abby McIntyre and Matthew Connolly were arrested at the Northland Family Planning at 3810 17 Mile Rd. in Sterling Heights, Michigan, according to spokesperson Lynn Mills.

Two pro-life activists entered University of New Mexico Center for Reproductive Health at E. 2301 Yale Blvd. SE in Albuquerque, New Mexico and gave a red rose and offer of support to the woman there but chose not to risk arrest, said spokesperson Tara Shaver.

The four arrested in Sterling Heights were charged with trespass and released by 11:30 a.m., according to Migliorino Miller, who told LifeSiteNews they will request a trial by jury so they can witness to what happens in the abortion facilities.

She was able to speak to one woman, Verna, in the waiting room and give her a red rose with a card, Migliorino Miller said.

“I said, are you here for an abortion and she said, ‘yes,’” Migliorino Miller said.

She then asked the woman her name, “and I said, ‘Come away with me, come out of this clinic with me right now. I will help you. If it’s financial help you need, if you need spiritual help, if you just want a friend, come on out with me.’”

And Verna started to get up but then a staff person came up and took her away, Migliorino Miller said.

There was also “a boyfriend who was in there. He was extremely hostile right from the get-go,” she said.

After police arrived, another woman came into the abortion facility, but staff “immediately took her right away to the back room,” Migliorino Miller said.

“So we stayed in the waiting room, just the four of us, we were sitting on the floor, we sang hymns and we prayed until the police officers placed us under arrest,” she said.

The four passively resisted arrest and were dragged out into the police cars.

“This was an attempt to be a witness to the truth and to life and the love of God in a place where those things don’t exist, and to be there in solidarity with the victims of abortion, try to reach out to the moms,” Migliorino Miller told LifeSiteNews.

“Who knows, maybe Verna will leave,” she added. “Even if somebody like Verna didn’t leave, we were there for her baby.”

The police took the four women out in wheelchairs and dragged out the two priests, he said.

The pro-lifers went into the Virginia abortion facility at 8:30 a.m. and were arrested by 10 a.m. It’s expected they will be released in about two hours, Cirignano said.

There were 10 women in the abortion center’s waiting room, he said.

“If God wills it,” this will be the beginning of a revival of the “rescue” movement, Migliorini Miller told LifeSiteNews.

The rescue movement peaked in the early 1990s, galvanized after Joan Andrews Bell was sentenced in 1985 to five years in prison after she entered an abortion center in Pensacola, Florida, and tried to unplug an abortion suction machine.

Andrews Bell spent 2 1/2 years at a maximum security prison in Florida, much of it in solitary confinement because she refused to cooperate with the authorities, forcing prison staff to drag her from place to place.

Her exceptional pro-life witness was chronicled in the 1988 book You Reject them, You reject me: the prison letters of Joan Andrews.

The roses were given to women in the abortion facilities and attached to each rose was a card that read: “You were made to love and to be loved … your goodness is greater than the difficulties of your situation. Circumstances in life change. A new life, however tiny, brings the promise of unrepeatable joy.”

Phone numbers of local pregnancy help centers were printed on the other side of the card.

Wagner was sentenced Tuesday to 30 months’ probation and 50 hours of community service for convictions arising from her December 12, 2016, arrest outside a west Toronto abortion center.

She has spent five years in jail for her non-violent attempts to save women and children from the violence of abortion.

Wagner told the court in her last trial she has been inspired by Linda Gibbons, who has spent 11 years in jail for her pro-life witness outside Toronto abortion facilities.

“I feel very strongly that we will be doing the Red Rose Rescue again,” Migliorino Miller told LifeSiteNews. “Hope that others will join us.”