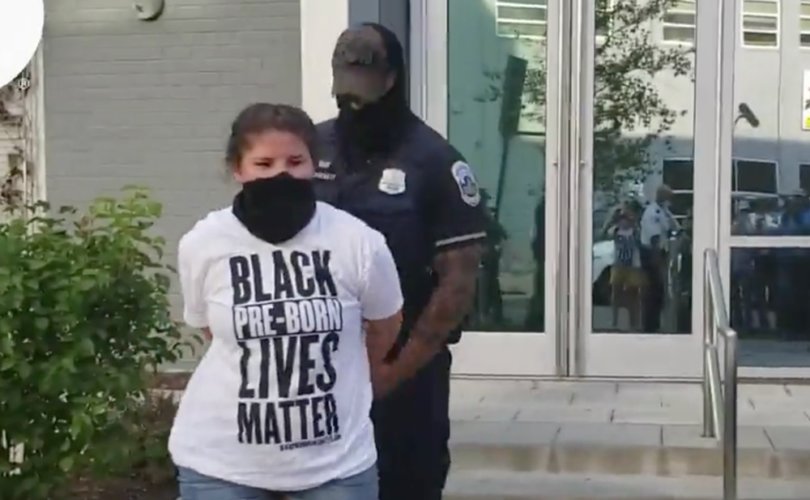 Erica Caporaletti from Towson University is arrested outside the D.C. Planned Parenthood on August 1, 2020/SFLA

WASHINGTON, D.C., August 1, 2020 (LifeSiteNews) – Two activists with Students for Life of America (SFLA) were arrested Saturday morning while peacefully attempting to chalk “BLACK PREBORN LIVES MATTER” outside of the Planned Parenthood megacenter in the nation’s capital.

SFLA had a permit and had communicated with the city about its plans to paint the street. This came following the city’s decision to allow a private organization to paint on the street a message in support of defunding the police. SFLA was asked to use tempera paint and had planned to do so.

D.C. Mayor Muriel Bowser famously renamed a street near the White House “Black Lives Matter Plaza” and had the slogan “BLACK LIVES MATTER” painted on the street there.

Early Saturday morning, police stopped the pro-lifers’ attempts to express their own message in paint. SFLA Strategic Partnerships Advisor Warner DePriest and SFLA student leader Erica Caporaletti from Towson University were then arrested on the scene. DePriest said in a Facebook live video (see below) that he was not read his Miranda Rights. The activists appear to have been charged with defacing public and/or private property.

“After applying and receiving our permit for this event today, after being told by the Metropolitan police that the Mayor has… ‘opened a Pandora’s box’ by painting public streets, we arrived to find six police cars threatening to arrest our team and students if they painted, even using the [tempera] paint we bought that the Police Department specifically requested,” explained SFLA President Kristan Hawkins. “When we asked if we could at least use sidewalk chalk to chalk our anti-violence message on the streets, the police threatened to arrest us.”

Bowser “will be hearing from Students for Life’s attorneys about these unconstitutional efforts to limit speech to government-approved topics,” continued Hawins. “Today is National Pro-Life Generation Sidewalk Day, meaning that thousands of pro-life students are in front of Planned Parenthood and other abortion vendor operation[s] praying and sharing the message that every child deserves hope and a future and that every mom deserves and will receive help.”

In a letter to the mayor about the planned event, Hawkins and other organizers noted: “Having opened the streets of your city for public expression, Students for Life of America requests the opportunity to add our voices to those concerned about how people of color are treated in America. Black [l]ives do matter, born and preborn, as too many people are lost in America today from causes that should be addressed and prevented for their disproportionate impact on minority communities … Your original decision to paint ‘Black Lives Matter’ on the street is government speech. However, your decision to allow protestors to paint ‘Defund the Police’ opened the streets up as a public forum. You are not permitted to discriminate on the basis of viewpoint in making determinations relating to public assemblies in public [forums]. The message of the pre-born will not be silenced.”

In a statement, Hawkins added, “What you didn’t see today on the city’s streets will be coming to billboards across the country, because BLACK PREBORN LIVES MATTER, and we will not be silent. Viewpoint discrimination is not Constitutional, and we will take this to court if necessary.”

SFLA said more information about their billboard campaign will be released in the coming weeks.

Though only 13 percent of the female population, African American women make up 38 percent of all reported abortions. Four out of five Planned Parenthood abortion vendors are within walking distance of minority-dense neighborhoods, as noted in a Supreme Court amicus brief.

The massive D.C. Planned Parenthood is located next to Two Rivers Charter School in the district’s increasingly gentrifying NOMA neighborhood.