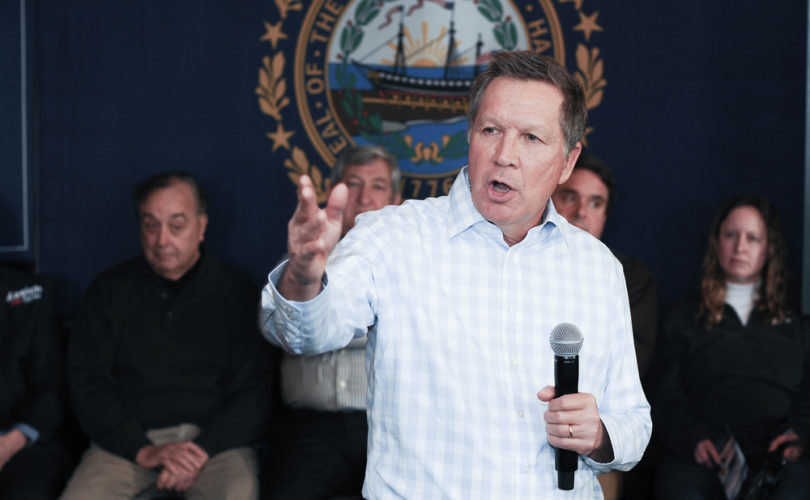 COLUMBUS, Ohio, December 15, 2016 (LifeSiteNews) — A powerful coalition of Ohio pro-life organizations is calling on the Ohio House and Senate to come back in session and override Gov. Kasich's veto of the Heartbeat Bill.

“This is a call to action,” Cleveland Right to Life president Molly Smith told LifeSiteNews. “If this bill can save 20,000 babies a year, it's worth fighting for.”

Entitled “Overturning the Governor Kasich veto of The Heartbeat Bill,” the letter claims its signatories represent “the real grassroots of pro-life voters.” This is because the statewide organization, Ohio Right to Life, whose president has close ties with Gov. Kasich, does not support the bill.

“We speak today, firmly, as one united voice,” the letter begins. “We are deeply disappointed in Governor Kasich's veto of the will of the people expressed in the Ohio House and Senate.”

Accusing the governor of being “ill-informed,” the pro-lifers dispel several myths surrounding the bill.

Ohio Right to Life has argued that the bill would actually set back the pro-life cause by giving courts an opportunity to reaffirm and strengthen the precedent set by Roe v. Wade.

But to the idea that the Heartbeat Bill may set back the pro-life cause, the letter explains that in the two states where it was overturned, Arkansas and North Dakota, “not a single existing pro-life law was overturned or in any way adversely impacted.”

To the fear that the bill will cost Ohio huge legal fees to defend, the letter states this is not so. To the contrary, “several highly respected constitutional attorneys have agreed to work pro-bono in its defense,” including well-known attorney Mat Staver of Liberty Counsel.

To the idea that the bill will be overturned, the letter writers express hope. “We agree with Ohio Senate President Keith Faber who believes with a new President and Supreme Court Justices, the bill has a better chance than it did before.”

“Ohio resides in the common-sense 6th District Court of Appeals, and a number of highly respected legal scholars believe that the Heartbeat Bill will fare no worse than the Pain-Capable Bill just signed by the Governor.”

Furthermore, “by the time this case makes its way through the courts, a lot could change, including the composition of the Supreme Court.”

The right-to-lifers state the fact that the Heartbeat Bill “has had massive support among those who identify themselves as being pro-life,” and the bill with it passed by a wide margin in both state chambers. They also note that the bill includes exceptions for the life and physical health of the mother.

They express regret that not one Right to Life Society signing the letter was contacted for input in the governor's veto.

“Planned Parenthood knows that babies’ hearts are valuable enough to be sold as research parts,” the pro-life leaders conclude. “The time to oppose this massive evil is now.”

The Ohio state legislature technically remains in session until early next week, but no further votes are scheduled. These pro-lifers hope to change that.