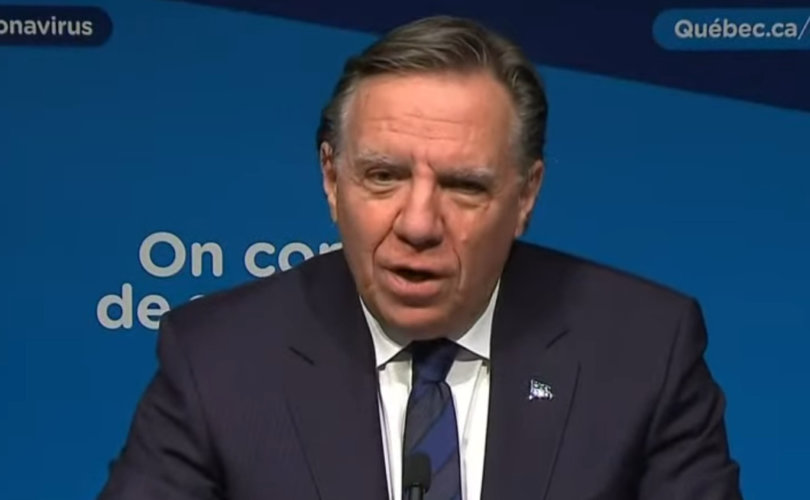 QUEBEC CITY (LifeSiteNews) — The Quebec government is dropping its planned tax or “health contribution” on citizens who refuse the experimental COVID jab.

Quebec premier Francois Legault confirmed in a press conference this afternoon that he is scrapping the controversial plan. Legault had announced in January that the French-speaking province was set to impose a tax on all citizens who remain unvaccinated for “non-medical reasons.”

While remaining insistent that vaccination is the only way out of the pandemic, Legault admitted that the announcement of the tax was met with serious pushback that only worsened the already deep divisions forming in society.

“I understand that this [tax] divides Quebecers and right now we have to build bridges, ” said Legault. “my role is to try to bring Quebecers together to stay united as a people. “

According to Legault, for the benefit of social cohesion, his administration is looking at less coercive ways of getting the remaining 10 percent of unvaccinated Quebecers to take the shot. One such measure is the coordination of squads of health professionals to go into areas with low vaccination rates as a way to educate them. Legault said that these squads will also be available to inject people in their homes if they so desire.

Despite Legault’s remarks that the policy was reversed out of his desire for social cohesion, members from opposing parties suggested this is just another example of him playing poker with the Quebec people.

“We have a premier who takes his population for fools, ” remarked Paul St-Pierre Plamondon, leader of the Parti Quebecois.

“I was going to say, ‘a premier who treats his population like children, ‘ but I treat my children with more respect for their intelligence and with more transparency than the premier is doing right now with the Quebec population. “

It was not clear how much the tax would be, but it was rumored that it would have been between $100 and $800 per unvaccinated citizen.

The proposed tax was criticized by both Quebecois politicians and those outside the province. Liberal Party of Quebec leader Dominique Anglade said the tax would create a “breach” in the universality of access to health care for each citizen regardless of economic status.

Alberta Premier Jason Kenney called the proposed tax “inhumane and unethical, and certainly un-Canadian,” and assured his province that Alberta would be taking no such action.

Premier Jason Kenney calls out Quebec’s proposed tax on the unvaccinated as “inhumane and unethical, and certainly un-Canadian.”https://t.co/UPKf52j9xU pic.twitter.com/zvIHhekNPC