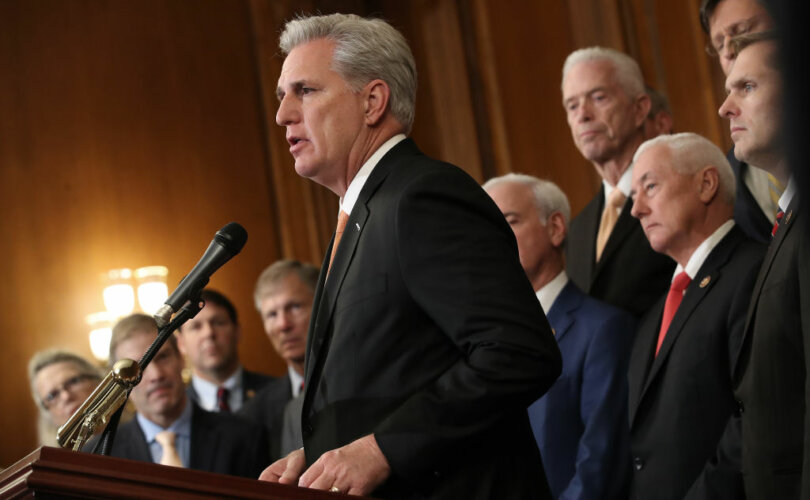 WASHINGTON, D.C. (LifeSiteNews) — Republicans are projected to take back control of the House in a significant blow to Joe Biden and the Democrats, dooming Biden’s legislative agenda and setting the stage for sweeping investigations into his administration.

Republican Rep. Mike Garcia on Wednesday was projected to win reelection in the 27th Congressional District of California, giving the GOP the 218 seats needed for a House majority.

Democrats have won 209 seats. Another nine are uncalled, and Republicans lead in four of those races, while Democrats are ahead in five.

Republicans broke Democrats’ monopoly on power in Washington amid widespread anger at Joe Biden and voter discontent over record-level inflation, surging crime, the crisis at the southern border, and radical LGBT and racial ideology in schools.

Biden’s approval rating currently stands at a dismal 41.6 percent, roughly where it has been for more than a year.

Democrats sought to hold on to their narrow House majority by focusing largely on abortion after the reversal of Roe v. Wade and demonizing conservatives as “extremists.” Democrats’ spending on abortion-related ads topped an unprecedented $320 million this cycle, Fox News reported, compared to just $31 million on ads about inflation, voters’ number one issue.

But that strategy fell through as Republicans flipped more than a dozen competitive House seats, including in New York, Florida, Iowa, and Wisconsin.

But Democrats outperformed expectations, pulling off upsets in several races considered toss-ups or lean Republican and picking off a small number of GOP-held seats, mostly in districts recently redrawn to be more favorable to Democrats.

Democrats are also projected to keep their narrow majority in the U.S. Senate.

McCarthy has faced criticism for Republicans’ underwhelming performance in the midterms and his recent leadership failures, including allowing House Republicans to vote in favor of a Democratic bill to codify same-sex “marriage” earlier this year.

The House Republican caucus nevertheless voted earlier this week to keep McCarthy as their leader, making him the clear favorite to succeed Nancy Pelosi as Speaker of the House.

A Republican majority in the House will be able to block Biden’s legislative priorities. Radical Democratic bills to legalize abortion up to birth, gut conscience protections, and wipe out election safeguards now have virtually no chance of becoming law.

Control of the House will give Republicans expansive oversight powers as well, including the ability to subpoena testimony and documents, as they prepare to launch a series of investigations into Biden and his administration.

McCarthy told CNN last week that House Republicans may pursue probes into the withdrawal from Afghanistan, the origins of COVID-19, and the Biden administration’s targeting of parents who protested at school board meetings last year.

He added that Republicans could seek impeachment investigations into Biden “if something rises to the occasion.”

Following the FBI raid on Trump’s Mar-a-Largo home, McCarthy also vowed that Republicans would “conduct immediate oversight” of the Department of Justice (DOJ) if they seized control of the House in the midterms.

Other top Republicans in Congress have made similar pledges. Rep. Jordan told Attorney General Merrick Garland and FBI Director Christopher Wray in a letter dated November 2 “to preserve all existing and future records” ahead of a probe into recent whistleblower allegations of abuse and corruption at the FBI.

In August, Kentucky Republican Sen. Rand Paul vowed a “full-throated investigation” into the origins of coronavirus and White House medical advisor Dr. Anthony Fauci’s ties to a Chinese lab from which the virus is believed to have emerged.

“He will be asked to testify under oath regarding any discussions he participated in concerning the lab leak,” Paul said.

Fauci’s resignation will not prevent a full-throated investigation into the origins of the pandemic. He will be asked to testify under oath regarding any discussions he participated in concerning the lab leak.

Biden and his son Hunter’s business dealings will likely be the subject of yet another forthcoming Republican investigation.

Rep. James Comer (R-KY), who is expected to take over as chair of the House Oversight Committee, said earlier this year that the committee “will be all over Hunter Biden.” “We’re going to focus on Hunter Biden not for political reasons, but because we feel he’s a national security threat,” he told Politico.

Other probable targets of GOP probes include Homeland Security Secretary Alejandro Mayorkas, who has repeatedly faced calls for impeachment from Republican lawmakers over his handling of the border crisis, and Education Secretary Miguel Cardona.