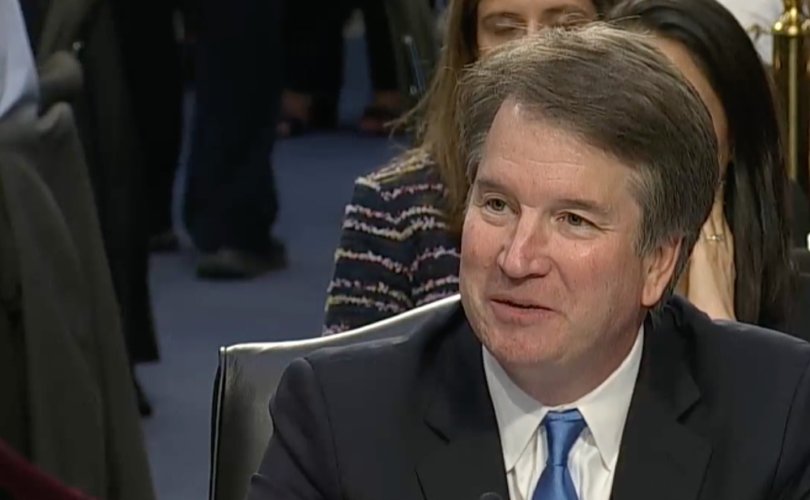 The vote, which was frequently interrupted by screaming protesters in the Senate gallery, comes nearly a month after it was originally intended, thanks to last-minute, unsubstantiated allegations of sexual assault that provoked an additional round of committee hearings and a seventh FBI background investigation.

“I applaud and congratulate the U.S. Senate for confirming our GREAT NOMINEE, Judge Brett Kavanaugh, to the United States Supreme Court,” President Donald Trump responded to the news. “Later today, I will sign his Commission of Appointment, and he will be officially sworn in. Very exciting!”

In July, Trump announced his selection of Kavanaugh as his choice to replace the retiring Justice Anthony Kennedy, a “swing justice” notorious for his pro-abortion, pro-LGBT rulings. He hailed Kavanaugh, a District of Columbia circuit judge, as a “brilliant jurist” who “can set aside [his] views to do what the law and Constitution require[s].” The pick won high praise from pro-life groups and bitter condemnation from pro-abortion activists, with numerous attempts to discern his position on Roe v. Wade.

Kavanaugh’s thin record of abortion-related statements and rulings did not offer a conclusive answer, but the closest seemed to be a 2017 speech he delivered on his “first judicial hero,” the former Chief Justice William Rehnquist. Kavanaugh said, seemingly approvingly, that Rehnquist believed a right to abortion was not “rooted in the traditions and conscience of our people,” and deemed Roe an example of “freewheeling judicial creation of unenumerated rights.”

The subject was further complicated during his confirmation hearings last month, where Kavanaugh expressed significant respect for Roe’s status as precedent and appeared reluctant to reiterate his 2017 commentary on unenumerated rights. He also approvingly quoted Justice Anthony Kennedy’s majority opinion in Obergefell v. Hodges, which forced all fifty states to recognize same-sex “marriages.”

Kavanaugh’s performance sparked some alarmed debate in conservative circles, but pro-life groups held firm in their support and his pro-life supporters argued that his answers were merely phrased carefully to navigate a narrowly-divided Senate.

Kavanaugh’s success seemed to be a foregone conclusion despite such misgivings, until a trio of women – Christine Blasey Ford, Deborah Ramirez, and Julie Swetnick – came forward to accuse Kavanaugh of sexual assault. The judge forcefully denied all of their claims, all of which lacked corroborating evidence.

None of the people Ford claims attended the party where Kavanaugh allegedly tried to rape her could recall any such event, and critics noted numerous inconsistencies in her different accounts of the incident. Swetnick changed several details of her own story in a recent interview, and has been involved in multiple lawsuits pertaining to false sexual harassment claims and other forms of fraud. Ramirez, meanwhile, had admitted to former classmates she wasn’t even sure of her alleged assaulter’s identity.

Nevertheless, many on the Left ran with the allegations, with some such as Democrat Sen. Mazie Hirono of Hawaii even suggesting Kavanaugh’s assumed pro-life views disqualified him from a presumption of innocence. Flake requested another FBI investigation in exchange for voting Kavanaugh out of the Senate Judiciary Committee and onto the Senate floor, to which Trump and the GOP agreed.

Several Democrats almost immediately complained that the seventh probe would be insufficient, but when the final product was completed Sen. Chris Coons, D-DE, admitted there was “nothing in here that is some bombshell that is unknown.” The effort seemingly satisfied Flake, Collins, and Manchin, leaving Alaska’s pro-abortion Sen. Lisa Murkowski as the only Republican to oppose Kavanaugh.

Despite deeming Kavanaugh a “good man” who is nevertheless not the “right person for the court at this time,” Murkowski voted “present” rather than “nay” on the final confirmation as a courtesy to Sen. Steve Daines, R-MT, whose daughter is getting married in Montana today. Daines offered to fly back if his vote was needed, but Murkowski’s “present” vote effectively nullifies his absence in an informal practice called “pairing.” Daines attended the wedding with the president's blessing.

Pro-life and pro-abortion reactions were jubilant and angry, respectively.

“We congratulate Justice Kavanaugh on his well-deserved and hard-earned confirmation. The balance of the Supreme Court has shifted back toward one that respects the will of the voters expressed through their representatives,” Susan B. Anthony List president Marjorie Dannenfelser said in a press release. “As Justice Kavanaugh takes his seat on the bench of the nation’s highest court alongside Justice Neil Gorsuch, we are confident he will continue to rule with the same fairness and independence that have characterized his entire legal career.”

“Senate Democrats should be ashamed of exploiting human pain and the serious issue of sexual assault for a partisan political agenda,” Dannenfelser added, vowing to ensure that senators who voted against Kavanaugh “will be held accountable.”

“As those who opposed Judge Kavanaugh said themselves, this confirmation process became a brutal gauntlet because it was a proxy war over issues like abortion,” Students for Life president Kristan Hawkins said. “But the Pro-Life Generation stood firm because we understood the stakes and believe that the Supreme Court needs judges committed to the rule of law, not political activism. When the next vacancy occurs on the high court, Students for Life staff and student leaders will be ready to again fight for courts where life is respected and protected.”

On the other side, Planned Parenthood Action Fund tweeted that “50 senators put their politics above survivors, the integrity of the Supreme Court, and protecting our rights. We won’t forget.”

“Women will NOT forget this blatant attack on our freedom, our rights and our bodies,” NARAL threatened on social media. “Not today, not tomorrow, and NOT in November.” The group also issued a press release attacking Kavanaugh for “calling into question” Roe’s legitimacy. Both statements notably ignored their former assault claims.

Curiously, Ford attorney Deborah Katz told CNN on Saturday that her client isn’t interested in getting Kavanaugh impeached from the Supreme Court, and has no plans to pursue her claims further. “What she did was to come forward and testify before the Senate Judiciary Committee and agree to cooperate with any investigation by the FBI, and that's what she sought to do here,” Katz said.

The Kavanaugh battle has also energized grassroots Republicans ahead of the midterm congressional elections in November, Breitbart reports. The National Republican Congressional Committee (NRCC) has seen a dramatic spike in donations since just September 29, with pollsters observing a marked rise in GOP voters’ interest in the midterms.