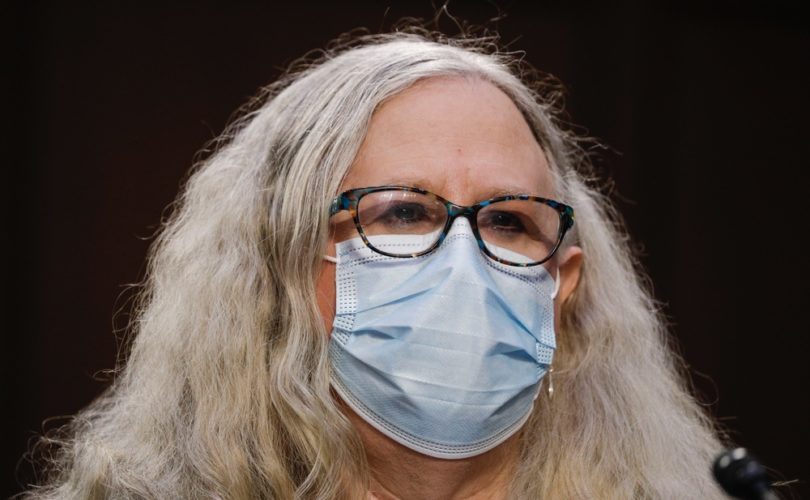 WASHINGTON, D.C., March 24, 2021 (LifeSiteNews) – The U.S. Senate voted 52 to 48 Wednesday to confirm Pennsylvania Health Secretary Richard “Rachel” Levine, a man “identifying” as a woman, to be assistant secretary of the U.S. Department of Health and Human Services (HHS) for the Biden administration.

Every Democrat voted in favor of Levine, joined by liberal, pro-abortion Republican Sens. Lisa Murkowski of Alaska and Susan Collins of Maine.

Conservative critics have argued that, as a so-called “trans woman” who endorses and promotes the notion that individuals can change their “gender identity” at will, Levine lacks the medical credibility and objectivity to be entrusted with hot-button transgender issues. He has been a longtime, outspoken proponent of “gender affirmation” and “sex reassignment” treatment for minors. In a 2017 lecture, he endorsed puberty-blockers to gender-confused children throughout puberty, followed by “sex change” surgery at 18. While transgender surgery “usually” is performed only on adults, Levine said “there are exceptions.”

“Many will no doubt characterize the Senate’s confirmation of Rachel Levine today as an historic occasion. And they aren’t necessarily wrong,” commented Terry Schilling, president of the American Principles Project. “For perhaps the first time ever, the position of Assistant Secretary for Health will be filled by someone who has openly and vocally advocated for allowing children to undergo sex change procedures. This is indeed an unprecedented moment.”

“But while President Biden and Democrats may have fooled voters last fall into believing such an extreme position wasn’t a part of their agenda, they will not be able to do so next time around,” continued Schilling. “Every Democrat in the Senate is now on record as supporting childhood sex changes, and they will have to answer for it to their voters. Make no mistake: this overreach by left-wing Democrats will have political consequences in 2022 and beyond.”

Apart from Levine’s personal gender confusion, critics note that Levine ran Pennsylvania’s draconian COVID-19 response, pushing nursing homes to readmit Wuhan coronavirus patients and ordering two-year-olds to wear masks in public. His nursing home stance was particularly controversial in light of the revelation that he moved his 95-year-old mother out of a nursing home at the same time. He claimed it was done at his mother’s request, but critics say it showed that Levine knew the risks of his policy guidance.

“In Pennsylvania, the pandemic struck seniors in nursing homes disproportionately hard compared to other states. This was due in part to poor decisions and oversight by Dr. Levine and the Wolf administration,” Sen. Pat Toomey (R-PA) said Wednesday, announcing his opposition to Levine’s confirmation. “Moreover, the commonwealth’s extended economic lockdown that Dr. Levine advocated for was excessive, arbitrary in nature, and has led to a slower recovery.”