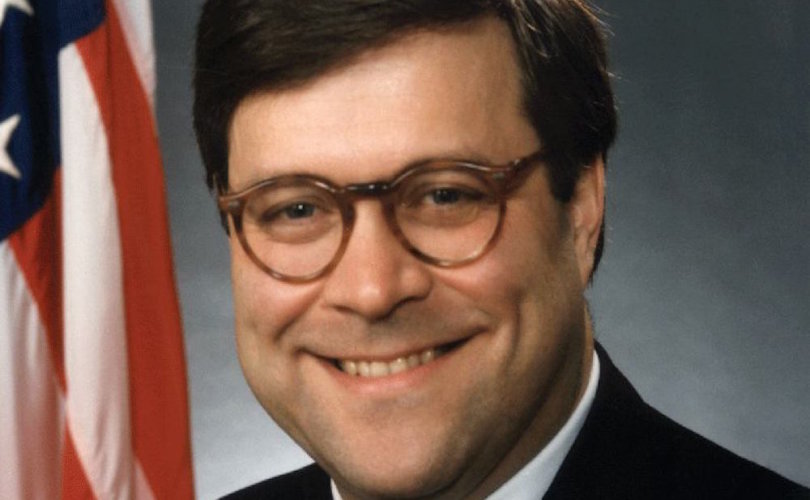 WASHINGTON, D.C., February 14, 2019 (LifeSiteNews) – The Senate voted 54-45 Thursday to confirm William Barr to become President Trump’s next attorney general, an appointment that is being debated over other issues but is encouraging to pro-lifers for his past comments recognizing Roe v. Wade as constitutionally bankrupt.

Trump asked for Attorney General Jeff Sessions’ resignation the day after the 2018 midterm elections, having long been dissatisfied with the pro-life appointee’s handling of both the Russia investigation and scandals involving the previous administration. A veteran of the CIA and Justice Department since the 1970s, Barr already held the position of Attorney General during the first Bush administration, for which the Senate confirmed him unanimously.

ABC News reports that Sen. Rand Paul of Kentucky was the only Republican to oppose Barr, while Democrat Sens. Joe Manchin of West Virginia, Krysten Sinema of Arizona, and Doug Jones of Alabama crossed the aisle to vote for him.

Most of the conversation regarding Barr’s nomination has revolved around how he will handle the ongoing investigation into the Russian government’s alleged interference in the 2016 election, but many pro-lifers are more interested in his credentials on abortion.

Gary Bauer, a veteran pro-life and conservative activist who served with Barr in the Reagan administration, responded to Barr’s original selection by calling him a “really good” guy, and a number of previous statements reveal he considers Roe to have been wrongly decided and deserving of reversal.

During his previous confirmation, Barr told the Senate Judiciary Committee that, however broad a constitutional right to privacy may be, “I do not believe it extends to abortion.” Then-Sen. Joe Biden, who went on to become President Barack Obama’s pro-abortion Vice President, complimented Barr for bucking tradition and giving a “candid answer” on the subject.

Days after the U.S. Supreme Court upheld Roe in Planned Parenthood v. Casey, Barr gave CNN an interview in which he said the justices “should have stuck with the Constitution” instead of upholding Roe, and predicted it would eventually “fall of its own weight” because it “does not have any constitutional underpinnings.”

“I think this department will continue to do what it's done for the past 10 years and call for the overturning of Roe v. Wade in future litigation,” he promised in 1992, noting that “the vote was worse than five to four several years ago, and we continued to go back to the Court. And I think the defects of the current decision will become more and more evident over time.”

It remains to be seen whether Barr’s Justice Department will take a more proactive stance on investigating scandals such as Planned Parenthood’s sale of organs from aborted babies. Sessions’ Justice Department sought documents on the scandal for an investigation in December 2017, but no developments have been announced since.