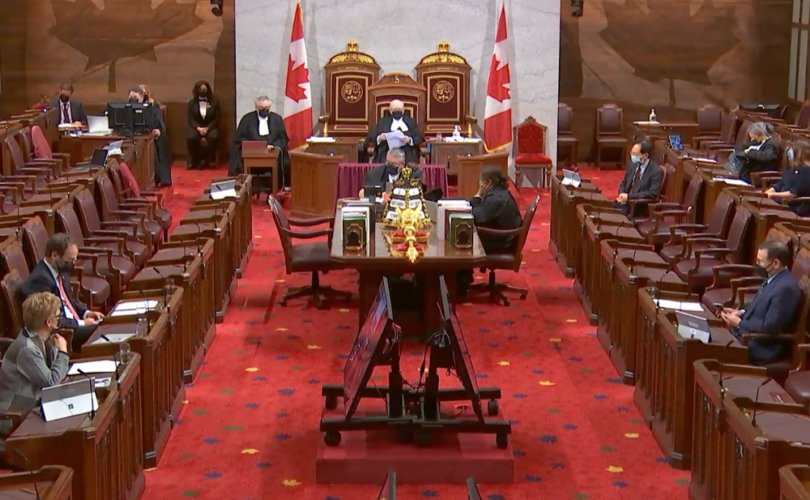 OTTAWA, Ontario, (LifeSiteNews) – A bill that could ban all pro-life demonstrations outside facilities that provide abortion, with a penalty of up to 10 years in jail, has been approved by the Canadian Senate.

Bill C-3 passed third reading in Canada’s House of Commons yesterday with no recorded vote. Today senators approved the bill with no amendments.

Bill #C3 has been adopted at third reading in the Senate: https://t.co/00a6QqF4vh#SenCA #cdnpoli pic.twitter.com/iBg9RA0knv

Bill C-3 was introduced to the House of Commons by Minister of Labour Seamus O’Regan of the Liberal Party on November 26.

The bill bars anyone trying to prevent a doctor or nurse “in the performance of their duties” or “intentionally obstruct or interfere with another person’s lawful access” to a hospital or clinic. It would be up to law enforcement to decide what constitutes interference.

According to Bill C-3: “Every person commits an offence who, without lawful authority, intentionally obstructs or interferes with another person’s lawful access to a place at which health services are provided by a health professional.”

Bill C-3 also states: “Every person commits an offence who engages in any conduct with the intent to provoke a state of fear in… a person in order to impede them from obtaining health services from a health professional.”

Due to its omnibus nature, the bill also contains a portion which would allow for up to ten paid sick days for federal employees and give unpaid bereavement leave for parents who face a stillbirth or the death of a child. The extended bereavement was added as an amendment from a CPC MP before being sent to the senate.

The bill has been blasted by Campaign Life Coalition (CLC) Campaigns Manager David Cooke as one that uses the Liberal party’s “old, corrupt tactic of presenting two entirely different proposals together – one popular and one controversial – in order to scuttle debate and secure passage of the more controversial matter.”

Cooke stressed that the question of what constitutes “interference” remains unclear.

“Does it mean counselling an abortion-minded woman on the sidewalk outside a hospital? Could the sidewalk counsellor be charged with ‘interference’ if that woman cancels her appointment with the abortionist? Would the abortionist – who just lost his commission on the killing – not jump at the chance to press charges,” wrote Cooke.

“Or could the pregnant woman assert to police that the very act of being shown an anti-abortion message ‘interfered’ with her access to abortion by making her feel ‘uncomfortable’?”

Jeff Gunnarson, national president of Campaign Life Coalition, said that Bill C-3 could “strip pro-life advocates of their democratic right to freely and peacefully witness to the sanctity of human life.”

The Liberal Party’s platform claimed that “anti-choice organizations are actively working to spread misinformation about abortion, putting the health and safety of young people and vulnerable women at risk.”

As a result, CLC has been working non-stop since Trudeau was re-elected on September 20 to rally all Canadians to demand that his government not remove charitable status from pregnancy centers.

On November 24, a large rally was held in Ottawa on Parliament Hill. In attendance were three pro-life CPC MPs Leslyn Lewis, Cathay Wagantall, and Arnold Viersen, who all vowed to defend pro-life pregnancy centers.

A CLC petition called “Save Canada’s crisis pregnancy centres” has 10,317 signatures at the time of writing.