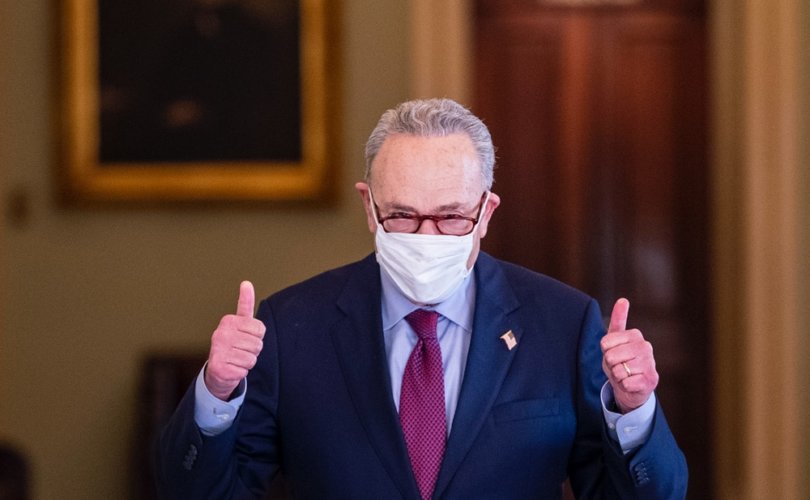 WASHINGTON, D.C., March 6, 2021 (LifeSiteNews) – The U.S. Senate voted 50 to 49 today to pass a $1.9 trillion coronavirus stimulus bill that allows taxpayer funding of abortion contrary to the decades-old Hyde Amendment that has applied to every other COVID-19 relief package.

“The so-called American Rescue Plan is disastrous for unborn children and their mothers,” said Marjorie Dannenfelser, president of the Susan B. Anthony List.

“After laboring through the night on a mountain of amendments — nearly all from Republicans and rejected — bleary-eyed senators approved the sprawling package on a 50-49 party-line vote. That sets up final congressional approval by the House next week so lawmakers can send it to Biden for his signature,” TIME reported.

“Shame on Senate Democrats who exploited COVID-19 relief to expand taxpayer-funded abortion on demand, breaking with more than four decades of bipartisan consensus. The strong majority of Americans, including millions of rank-and-file Democrats, oppose forcing taxpayers to pay for abortions,” said Dannenfelser. “We thank Senators Daines and Lankford for their heroic efforts to fix this bill, as well as the three Senate Democrats who stood up to extremists in their party and voted with all their Republican colleagues in favor of Hyde protections, showing that life is not a partisan issue.”

Senator Rand Paul (R-KY) also fought to prevent the bill from being able to be used to bail out Plannd Parenthood, America’s largest abortion chain.

Thank you, @RandPaul! This is a huge victory for countless human lives that will be saved from the violence of abortion and the evil of facilities like Planned Parenthood. https://t.co/EBM2xFz5Fc

The Senate just passed a COVID-19 relief bill that allows for taxpayer funding of abortion.

The 40 year bi-partisan consensus that federal taxpayer dollars should not be used for elective abortions is over.

Pro-lifers must remember in November!

Shameful. Senate Democrats voted to allow billions of taxpayer dollars to be used to fund abortions.

They voted against applying a 44 year protection called the Hyde amendment—one that was included in all five previous bipartisan COVID packages.

On March 5, the Center for Family and Human Rights (CFAM) warned, “The bill makes funding for abortion groups available through $8.6 billion for the global response to the pandemic. The global response to the pandemic led by the United Nations Secretary General Antonio Guterres designates reproductive health, including abortion, as essential to the COVID-19 response.”

“The COVID-19 bill appropriates over $500 million in foreign assistance for humanitarian emergencies, $204 millions for State Department operations, and $41 million for USAID operating expenses that are not covered by the Helms and Siljander Amendments which respectively prohibit U.S. funds from being used to perform or promote abortion overseas.”

The international pro-life lobby group added, “More troubling to pro-life Senators, is the $8.7 billion designated for the global response to the pandemic,” noting that “Since March, UN Secretary General Guterres and UN agencies made abortion essential to the UN pandemic response. They included ‘sexual and reproductive health’ as essential to COVID-19 UN policies, and defined this term by reference to a UN manual that declares abortion a human right and says medical providers should be forced to refer for abortion against their conscience.”

The bill also pumps $14 billion into distributing experimental mRNA COVID-19 vaccines and sends most Americans $1,400 stimulus checks. Critics say they would rather the economy and businesses be fully re-opened rather than receive a one-time government check.

He'll be getting a $1,400 stimulus check as part of the Democrats' “COVID relief” bill.

The bill now goes back to the U.S. House for a final vote. President Joe Biden is expected to sign it.