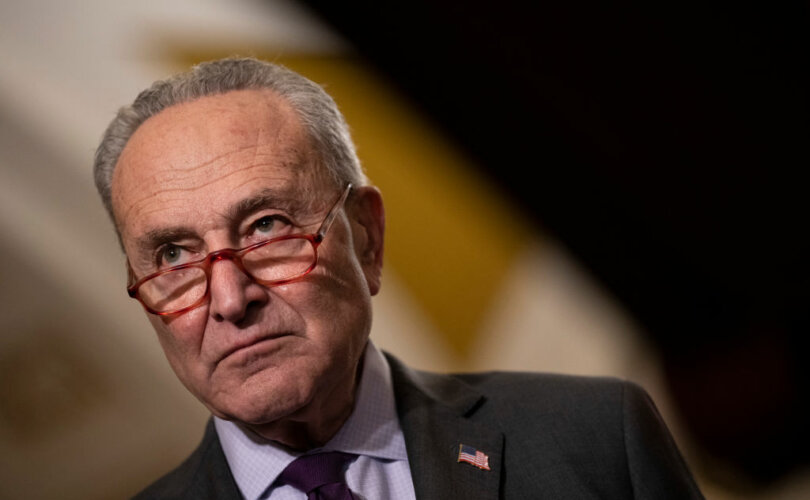 (LifeSiteNews) – The U.S. Senate passed Democrats’ bill to codify same-sex “marriage” in a 61-36 vote on Tuesday, dealing a major blow to conservatives and putting the legislation one step closer to becoming law.

Twelve Republicans joined all Democrats to give final approval to the “Respect for Marriage Act” (RMA), even after the Senate rejected three amendments proposed by Republican senators to blunt the bill’s serious harm to religious liberty.

The RMA makes the redefinition of marriage the law of the land, including in the event that the Supreme Court overturns its 2015 Obergefell v. Hodges decision that mandates legal recognition of same-sex “marriage” nationwide.

The bill repeals the Defense of Marriage Act of 1996, which federally recognized marriage as between one man and one woman and guaranteed the right of states to uphold traditional marriage, and instead requires the federal government and all 50 states to recognize homosexual “marriages” and other civil marriages lawfully performed in any state, potentially including incestuous and underage marriages.

Those same Republicans voted to advance the RMA earlier this month.

GOP Sens. Pat Toomey of Pennsylvania and Ben Sasse of Nebraska and Democratic Sen. Raphael Warnock of Georgia, who is campaigning ahead of Georgia’s run-off election next week, did not vote.

Republican Senate leader Mitch McConnell voted against the bill but refused to stake out a public position before the vote. Sen. John Thune of South Dakota, the GOP senator responsible for enforcing party discipline, also voted against the RMA, though he did not urge fellow Republicans to oppose it.

RELATED: Georgia’s runoff election next month to decide how much gridlock Senate Democrats will face

The bill’s passage came despite the opposition of many of the most prominent conservative groups in the United States, including the Heritage Foundation and Alliance Defending Freedom, thousands of Christian churches and institutions, and the overwhelming majority of Republican voters who oppose federal legislation to codify homosexual “marriage.”

Conservative and religious leaders pointed out that the RMA applies to everyone “acting under color of law” – a phrase that has been interpreted to refer to state-funded services like adoption centers – and contains a “private right of action” clause that allows anyone “harmed by a violation” to bring civil action “for declaratory and injunctive relief.”

The Department of Justice and state attorneys general would also be able to bring civil action against alleged violators.

Supporters of the RMA agreed to an amendment purportedly to address religious freedom concerns, but the amendment has faced blistering criticism from religious liberty advocates for failing to include meaningful protections.

“This dangerously cynical and completely unnecessary bill is a direct attack on the First Amendment,” said Alliance Defending Freedom Senior Vice President of Strategic Initiatives Ryan Bangert on Tuesday. He added that the RMA “exposes Americans throughout the country to predatory lawsuits by activists seeking to use the threat of litigation to silence debate and exclude people of faith from the public square.”

“Today, the Senate has chosen to disregard legitimate concerns about the undeniable harms of this bill,” he continued.

Bangert noted that Republican Sens. Mike Lee of Utah, Marco Rubio of Florida, and James Lankford of Oklahoma offered comprehensive amendments to shield individuals and institutions from retaliation for supporting traditional marriage. But the Senate rejected Lee’s amendment in a 48-49 vote, and Rubio and Lankford’s amendments also failed in votes of 45-52.

Sen. Collins was only Republican who voted against the Lee Amendment. All Senate Democrats other than Sen. Joe Manchin of West Virginia opposed the amendment.

Key amendments to protect religious freedom in the misnamed "Respect for Marriage Act" have failed. Congress has failed to defend America's First Freedom.

‘Respect for Marriage Act’ expected to pass the House

The bill has to pass the House again before going to Joe Biden’s desk for signature. A final vote in the lower chamber could come as early as next Tuesday.

The White House has strongly endorsed the “Respect for Marriage Act,” which would be Biden’s first major legislative victory on LGBT issues.

“I look forward to the House passing this legislation and sending it to my desk, where I will proudly sign it into law,” he said Tuesday night after the bill passed the Senate.

Polling has consistently shown broad disapproval of the RMA among Republican voters, however.

A recent Heritage Foundation survey of likely voters in Indiana, Iowa, Utah, West Virginia, and Wyoming found that 70 percent of GOP voters in the five states opposed the bill. Among all voters, 47 percent opposed it, and just 41 percent supported it.

A previous Economist/YouGov poll found that nearly 60 percent of Republican voters did not support the legislation, compared to 30 percent that did.

“Sadly our legislators aren’t willing to open their hearts & minds to the Truth that God has revealed to us,” said Bishop Joseph Strickland of the Diocese of Tyler, Texas. “Their vote will not change the Truth but it will further damage our nation. ‘One nation under God’ is becoming a fractured nation without God. A dangerous place to be!”

Sadly our legislators aren’t willing to open their hearts & minds to the Truth that God has revealed to us. Their vote will not change the Truth but it will further damage our nation. “One nation under God” is becoming a fractured nation without God. A dangerous place to be! https://t.co/ZMsqVmMAOf

“Severely disappointing vote out of the Senate today,” tweeted Heritage Foundation President Kevin Roberts. “@Heritage will continue the fight for every Americans’ religious liberty as the so-called ‘Respect for Marriage Act’ heads back to the House.”

Severely disappointing vote out of the Senate today. @Heritage will continue the fight for every Americans’ religious liberty as the so-called “Respect for Marriage Act” heads back to the House. https://t.co/JwYZbe5px5

Conservative Republican congressman Rep. Chip Roy of Texas urged voters to “remember the 12 @SenateGOP Republicans who were fine empowering the woke mob to go after you.”

Remember the 12 @SenateGOP Republicans who were fine empowering the woke mob to go after you. #StandUpForAmerica https://t.co/o73nBuNSvH

1/3 “Today the Senate, including 12 Republicans, voted to undermine religious freedom and expose Catholics to debilitating lawsuits brought by those seeking to silence our voices in the public square.”

Disappointing. A direct betrayal of every American who believes that marriage is between one man and one woman. #RespectForMarriageAct https://t.co/WUGIvdaS1I

Republicans clearly acknowledged by their support of the Lee, Lankford, and Rubio amendments that this legislation is a threat to the First Amendment freedo­­­­ms of individual Americans. And yet 12 of 12 Republicans still chose to vote for the (Dis)Respect for Marriage Act.